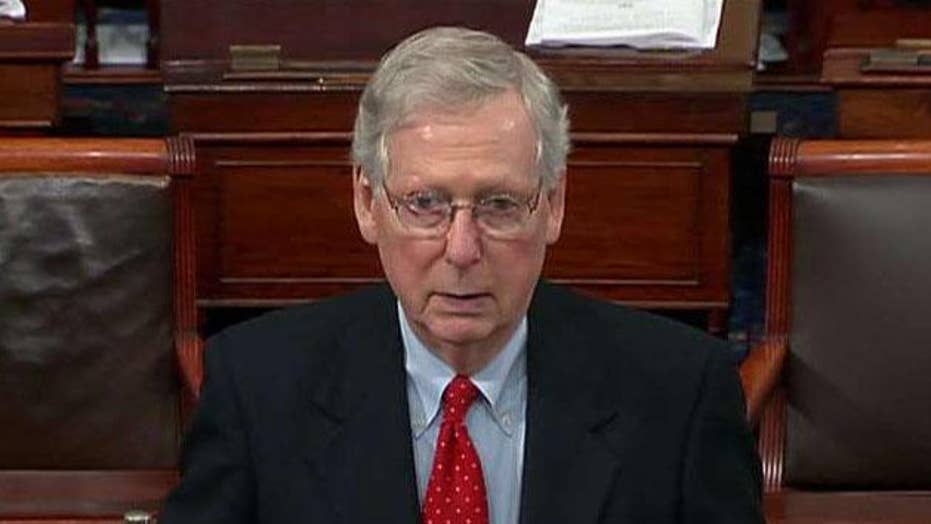 McConnell to incoming Dems: Senate will not waste its time on a bill the president will not sign

Few know how to bring government to a grinding halt better than Senate Majority Leader Mitch McConnell, R-Ky. After all, it was McConnell who said in 2016: "One of my proudest moments was when I told Obama, 'You will not fill this Supreme Court vacancy.’”

McConnell succeeded in denying President Obama the right to appoint a Supreme Court justice to a seat that was vacant for 19 months until President Trump appointed Neil Gorsuch.

So it is worth noting McConnell’s absence from the government shutdown instigated by Trump. He has disappeared from the debate. In fact, McConnell didn’t even attend the president’s news conference Friday about the shutdown.

While the House Republican leadership was standing next to President Trump during the news conference, McConnell was nowhere to be found, even though he attended the White House meeting about the shutdown minutes beforehand.

Just before Christmas, the Senate passed legislation on a voice vote that would fund the federal government to stay open through Feb. 8 without the more than $5 billion that President Trump is demanding for his wall.

In her first act as speaker of the House last week, Rep. Nancy Pelosi, D-Calif., passed the same legislation in the House that the Senate passed in December.

Now McConnell refuses to bring the House legislation up for a vote in the Senate without Trump’s support. In response, Pelosi accused McConnell of abdicating his responsibility as Senate majority leader.

Why is McConnell ducking this fight now? Mitch McConnell has a problem – and it’s Donald Trump. Senate Republicans are facing a tough 2020 election with 22 seats to defend and they may be starting to realize Trump is a liability. In fact, one of those Republican senators up for re-election in 2020 is Mitch McConnell.

Joining Alexander in announcing his retirement is Sen. Pat Roberts, R-Kan. – and we’re just in the second week of 2019.

Freshman Sen. Mitt Romney, R-Utah, set an independent tone for the new Senate term with his critical op-ed about President Trump in The Washington Post.

Romney wrote: “With the nation so divided, resentful and angry, presidential leadership in qualities of character is indispensable. And it is in this province where the incumbent’s shortfall has been most glaring …. To reassume our leadership in world politics, we must repair failings in our politics at home. That project begins, of course, with the highest office once again acting to inspire and unite us.”

Trump is even a factor in McConnell’s re-election in Kentucky, where the senator faces a potential primary challenge from Gov. Matt Bevin, a Trump devotee.

If McConnell draws a primary challenge from his right by Bevin that could pose the biggest political threat of all to the Senate majority leader. It is possible that McConnell, 76, may even decide not to run for re-election. Given all that has happened in the last two years, nothing can be ruled out.

McConnell is facing pressure from all sides and everywhere he turns there is Trump. The Senate majority is at risk, his iron grip on the Republican caucus seems to be slipping, and his own political future is potentially in jeopardy.

Meanwhile, Republican senators are starting to see Trump as a liability. An unpopular president, pushing an unpopular wall, and an unpopular government shutdown – all three opposed by the majority of Americans – combine to put McConnell in an untenable situation.

In addition, the investigation by Special Counsel Robert Mueller of possible cooperation between the Trump campaign and Russia to help elect Trump in 2016 continues. And House Democrats are planning to launch their own oversight hearings into the Trump administration.

All this means it’s only going to get harder for President Trump to fend off attacks and even harder for Senate Republicans to continue to support him.