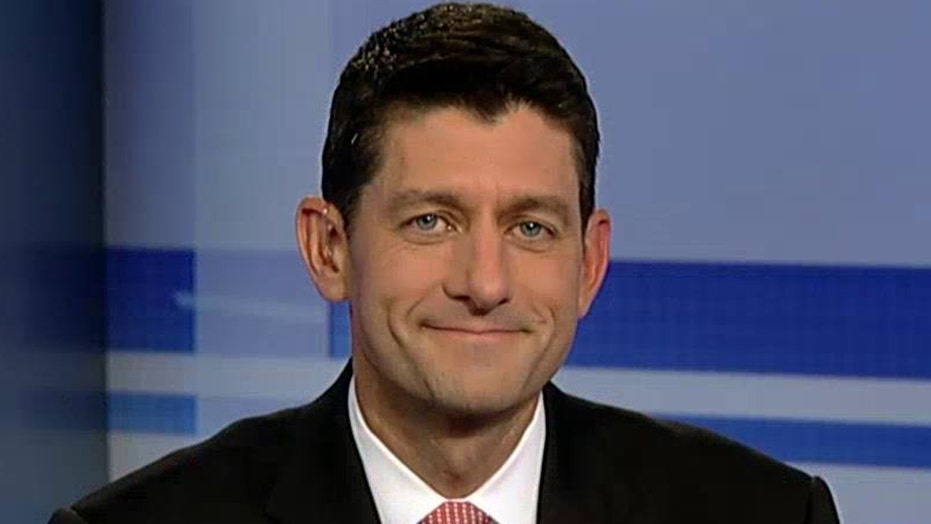 New House Speaker goes 'On the Record' on the challenges awaiting him as he tries to unite a broken House, divided GOP and work with the White House

Prizefighting legend Sugar Ray Robinson entered the ring for a staggering 198 bouts during his even more astonishing 25-year boxing career.

There is a reason why most boxers only fight two or three times a year. Physical limitations. The wear and tear of too many brawls. The body just can't take it. There's a threshold, no matter how well-conditioned or trained a boxer may be.

And that's a little bit of what's happened here on Capitol Hill for the past eight weeks.

It's been a brutal fall. Absolutely punishing. And yet other fights are ahead.

But now that there's a new House speaker and at least a general agreement on a budget pact. The boxers are retreating to their corners. Time to get patched up. There will be other bouts, to be sure. But it's time to heal, nurse the wounds and go back into training.

Here's what's gone down in Congress since the start of September:

And don't forget about that musical chair exercise. If McCarthy advanced to speaker, House Majority Whip Steve Scalise, R-La., and Budget Committee Chairman Tom Price, R-Ga., were going to duke it out for majority leader. And if Scalise won, Rep. Patrick McHenry, R-N.C., was going to face off against a slate of candidates for the whip job.

Plus, if Ryan didn't run, there was the laundry list of Republicans who planned to run for speaker in his place. The potential manifest of candidates bordered around 20 names.

About the only person not considered for a position in the House Republican leadership hierarchy this fall was Bud Black, nascent manager-designate of the Washington Nationals. Black was the pick to be the Nationals' skipper -- until he wasn't the choice and the team instead hired Dusty Baker.

What happened to Black? Did the House Freedom Caucus block him or something?

Back to the turbulent autumn ...

There was the historic visit to the Capitol by Pope Francis. A flirtation with a government shutdown. A flirtation with crashing into the federal debt ceiling. An 11-hour appearance before the House Benghazi Committee by Democratic presidential frontrunner Hillary Clinton. The execution of a rare parliamentary gambit not successfully deployed in 13 years to renew the Export-Import Bank. The selection of Rep. Kevin Brady, R-Texas, to succeed Ryan as the new chairman of the powerful Ways and Means Committee. A measure to stave off a crisis over highway funding.

We haven't even gotten to Congress just handling daily, run-of-the-mill stuff. Hearings on Volkswagen emissions. Hearings about ISIS and Russia.

Congress itself is partly responsible for this crush. It consistently tries to jam multiple, high-profile issues and events into a limited amount of weeks with tight deadlines. Both bodies of Congress vacated Washington for almost all of August and the first few days of September. It's important to note that time back in the states and districts is critical to the job of lawmakers. But narrow timeframes in Washington -- curtailed by shortened work weeks -- piles up all of the business, triggering the mania which enveloped the Capitol the past two months.

Perhaps now there will be a return to normalcy, if even for a short period. Don't forget that lawmakers have to figure out a way to keep the government open beyond Dec. 11. The outcome of that enterprise is far from concluded and fraught with all sorts of landmines.

But that's okay. Congress is now between bouts. A respite between the fights. Let their tired muscles recuperate before they're back to throwing haymakers.

There's a reason why boxers only fight a few times a year. And lawmakers, too.