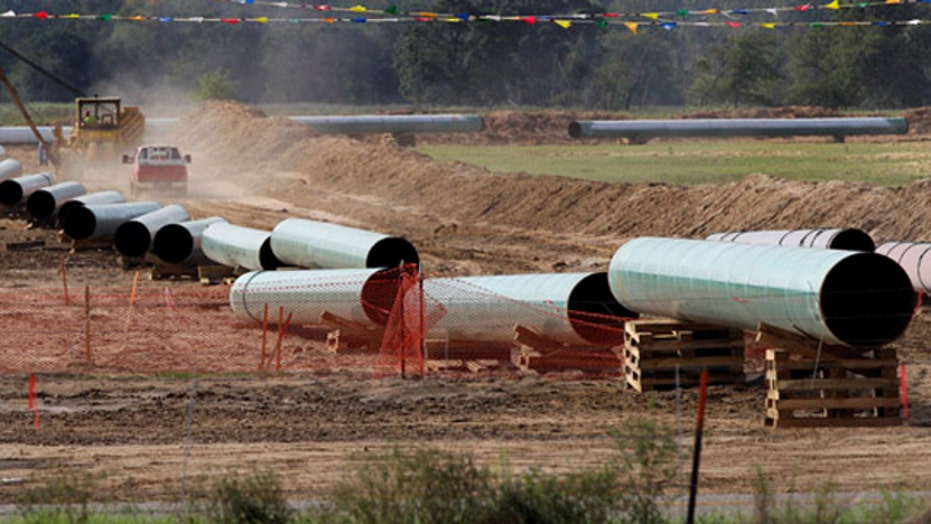 Debate over future of Keystone XL

Should push for pipeline continue?

A Senate bill to build the Keystone XL oil pipeline passed a preliminary but key vote on Monday, setting the stage for debate and final passage -- and a likely showdown with President Obama.

The bipartisan bill cleared the procedural hurdle on a 63-32 vote -- well over the 51-vote majority needed for final approval, but four votes shy of the two-thirds majority needed to override a likely presidential veto.

Leaders of the Republican-led Senate acknowledged before the vote that they didn’t have the super-majority but expressed hope that amendments would sweeten the deal enough to swing four additional Democrats for the final vote.

However, he acknowledged the possibility that Senate Republicans eventually might have to attach the Keystone bill to legislation that can get a 67-vote majority.

Senate Majority Leader Mitch McConnell of Kentucky has promised to hold an open amendment process, which could potentially last for weeks.

The GOP-led House passed pipeline legislation last week, as it often has in recent years.

The pipeline -- which would transport crude oil from Canada to Gulf Coast refineries -- has become one of Washington’s most partisan issues, even playing a major role in the midterm elections.

A Senate effort to pass the legislation in the final days of the last Congress failed by one vote, essentially ending any hopes Louisiana Sen. Mary Landrieu, a Democratic cosponsor, had of winning a fourth term in a runoff election.

And now that Republicans control the Senate for the first time since 2006, McConnell has made passing Keystone his top priority, with the legislation in fact titled Senate bill 1.

Keystone supporters largely argued that completing the pipeline would improve the country’s energy independence and create tens of thousands of steady jobs.

Critics, including Obama, who has threatened to veto the bill, question the amount of steady, full-time work the pipeline would create and argue it is an environmental concern.

Prior to Monday’s test vote, Hawaii Democratic Sen. Brian Schatz remarked on the Senate floor that the Canadian oil is some of the “dirtiest” in the world and that Republicans are “relentless” in their pursuit of passage.

“I just don’t understand,” he said. “The legislation is not deserving of being the No. 1 priority of the 114th Congress.”

Completion of the privately-funded, Canadian project has been on hold for roughly six years, amid a series of State Department studies.

And Obama has vowed to veto the legislation if it reaches his desk before the final agency study is complete.

Another of his concerns, a pending lawsuit, was resolved Friday when the Nebraska Supreme Court rejected a legal challenge brought by Keystone opponents.

The proposed 1,179-mile pipeline would enter the United States at Morgan, Mont., cut across South Dakota and connect with an existing pipeline in Steele City, Neb., before reaching the refineries along the Texas Gulf Coast. It would carry an estimated 800,000 barrels of crude oil a day.

If Obama follows through on his veto promise, it will become the first of what are expected to be numerous clashes with the Republicans, who are now in control of both houses of Congress.

By bringing the legislation to a vote one week after taking over the Senate majority, Republicans hope to achieve two goals at once.

Passing the measure is the first, and ushering in a new era of open Senate debate with the opportunity for lawmakers to seek votes on proposed changes is the second.

"It's the latest example of Congress getting back to work under a new Republican majority," said McConnell, in a jab at Democrats who have generally blocked votes on amendments over the past few years.