Rep. Karen Bass, D-Calif., is tackling mounting questions about her past -- on issues spanning her remarks about Cuba and Scientology as well as events affiliated with the Nation of Islam -- amid renewed scrutiny due to her presence on presumptive Democratic presidential nominee Joe Biden’s VP shortlist.

“I’m not a socialist. I’m not a communist. I’ve belonged to one party my entire life and that’s the Democratic Party and I’m a Christian,” Bass told NBC News in an interview published Monday.

Bass is widely reported to be on Biden’s running mate shortlist, but as her odds and profile have risen in recent weeks, so has the media scrutiny into her past -- particularly concerning her relationship with Cuba.

Bass traveled to Cuba in 1973 with an organization called the Venceremos Brigade, a joint venture between the Castro regime and left-wing U.S. groups that organized trips for Americans to the country. During that trip, she went to see Fidel Castro speak and, in 2016, when the dictator died, she sparked controversy by referring to him as "commandante en jefe" (commander in chief) and calling his death a “great loss to the people of Cuba.”

After criticism from both Democrats and Republicans, she now says she would do things differently.

“I have talked to my colleagues in the House about that, and it’s certainly something that I would not say again,” she told MSNBC. "I have always supported the Cuban people, and the relationship that Barack Obama and Biden had in their administration in terms of opening up relations.”

In that interview, she also called the Castro regime "very troubling." She also has claimed that when she visited the communist dictatorship in the '70s she already knew then that it was not the utopia others believed it to be.

“I didn’t have any illusions that the people in Cuba had the same freedoms I did. I came home and was protesting everything; I knew that the Cuban people didn’t have the ability to do that,” she told The Atlantic in a broad article on her ties to Cuba.

On Sunday, she told NBC News that “I don’t consider myself a Castro sympathizer.”

Meanwhile, The Daily Caller reported Monday that Bass appeared at Nation of Islam events in 2014 and 2015, posed for a picture with a top group official and attended a forum in 2013 by The Final Call, the group's official mouthpiece.

In 2018, Tony Muhammad, the director of the Nation of Islam’s Western division, praised Bass and another California Democrat, Rep. Maxine Waters, during a 2018 interview: 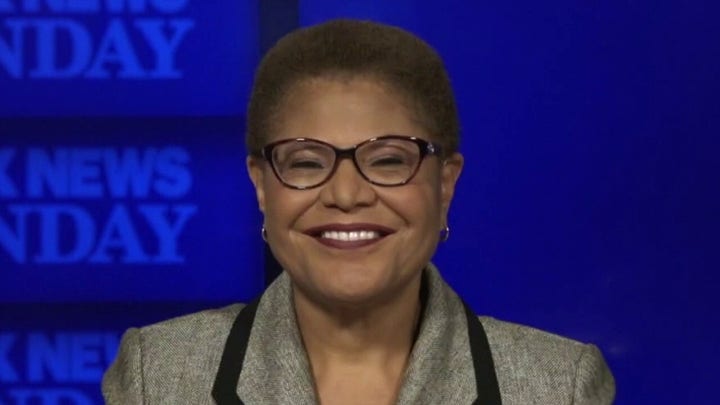 “I think our Black politicians should stand down. Minister [Louis] Farrakhan will take a call from a Maxine Waters or Karen Bass. He will stop what he’s doing … come and correct him, he’s told them. But don’t let anyone tell you I’ve done something wrong without checking.”

A spokesperson for Bass told the Caller that Bass has never met or talked to Farrakhan.

That controversy comes just days after the Caller reported that Bass praised the controversial Church of Scientology at an opening in 2010.

“The Church of Scientology I know has made a difference, because your creed is a universal creed and one that speaks to all people everywhere,” Bass said.

“The words are exciting of your founder, L. Ron Hubbard, in The Creed of the Church of Scientology: that all people of whatever race, color or creed, are created with equal rights,” she said.

On Saturday, Bass released a statement noting that she worships at a Baptist church, and says that at the event she “found an area of agreement in their beliefs -- where all people, of whatever race, color, or creed are created with equal rights, which is what my remarks were about.”

“Since then, published first-hand accounts in books, interviews and documentaries have exposed this group. Everyone is now aware of the allegations against Scientology,” she said. “Back in 2010, I attended the event knowing I was going to address a group of people with beliefs very different than my own, and spoke briefly about things I think most of us agree with, and on those things -- respect for different views, equality, and fighting oppression -- my views have not changed.”

A running mate is expected to be announced by Biden soon. Others on the shortlist are believed to include Sen. Kamala Harris, D-Calif., former National Security Adviser Susan Rice, Rep. Val Demings, D-Fla., and Sen. Elizabeth Warren, D-Mass.

But a source familiar with the process of selecting a vice presidential nominee told Fox News on Monday that an announcement isn't likely this week.