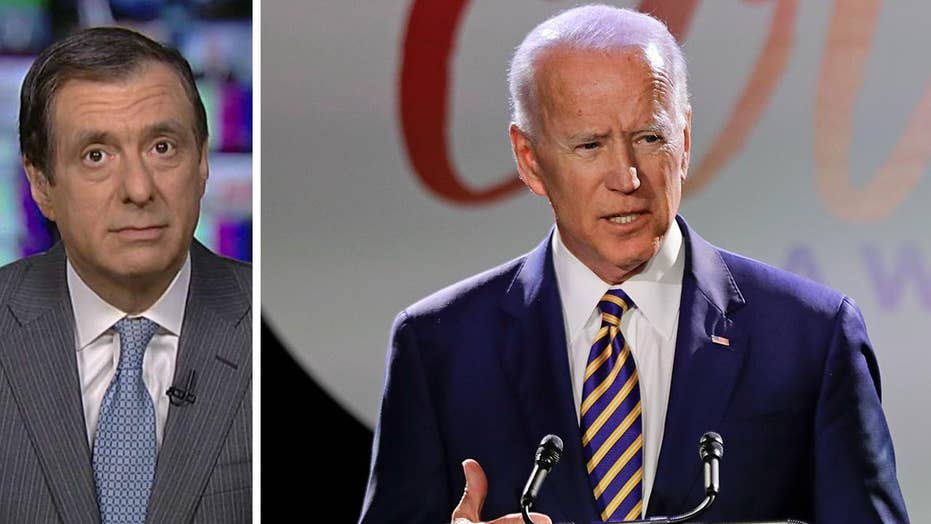 Howard Kurtz: Are media using one #MeToo episode to take down Biden?

'MediaBuzz' host Howard Kurtz weighs in on recent accusations by Lucy Flores, a former Democratic assemblywoman in Nevada, accusing former Vice President Joe Biden of some inappropriate touching, and how this might not be his real problem. Biden might in fact not be liberal enough for the liberal precincts of the media.

Joe Biden has a problem, and it goes beyond the latest accusation of being too touchy-feely.

Barack Obama's vice president is not liberal enough for the liberal precincts of the media.

And they are combing through his four-decade record and painting him as hopelessly out of step with today's progressive movement as they see it.

And this counter-campaign is gathering force even though Biden hasn't jumped into the 2020 race, as he had planned to do around the end of April.

The New York Times delivered a classic example on Friday with a lengthy piece on his stance on abortion, headlined: "When Joe Biden Voted to Let States Overturn Roe v. Wade."

Yes, that's true, he did, in committee — back in 1982. Biden, as a Catholic Democrat, was openly conflicted on the issue. But he voted against the same measure the next year when it reached the Senate floor.

Lucy Flores, a former Nevada assemblywoman, claims Biden approached her from behind, smelled her hair and kissed the back of her head at a 2014 campaign event.

In the first part of his Senate career, Biden also voted against the use of taxpayer funds for abortions, just as Al Gore and other more moderate Dems did.

So although Biden has been a staunch supporter of abortion rights for 30 years, the Times says his long-ago deviations "are likely to draw fresh scrutiny in a Democratic primary race where women are expected to make up a majority of voters."

In fact, Lucy Flores told CBS that what Biden did with her is "disqualifying" — along with his past "anti-abortion" stances. So the underlying motivation is that Biden isn't (or wasn't) liberal enough for her.

The Times story was downright decorous compared to the pounding that Biden is taking in liberal media outlets.

HuffPost has a takedown titled "7 Reasons Progressives May Want to Avoid a Joe Biden Candidacy."

The piece ticks off his alleged apostasies of the past in such areas as criminal justice, backing the Iraq war (like Hillary Clinton), and supporting the banking industry (the ex-senator, of course, represented the tiny state of Delaware, where the industry is huge).

And then there was this category: "He's a Little Bit Creepy."

Rebecca Traister gives him two thumbs down in New York magazine, under the headline "Joe Biden Isn't the Answer":

"He is the amiable, easygoing, handsy-but-harmless guy who's never going to give you a hard time about your own handsiness or prejudice, who's gonna make a folksy argument about enacting fundamentally restrictive policies ...

"He has provided liberal cover to anti-feminist backlash, the kind of old-fashioned paternalism of powerful men who don't take women’s claims to their reproductive, professional, or political autonomy particularly seriously, who walk through the world with a casual assurance that men's access to and authority over women's bodies is natural. In an attempt to win back That Guy, Joe Biden has himself, so very often, been That Guy."

Vox is equally dismissive, blaring the headline "Joe Biden is the Hillary Clinton of 2020."

You would think that Biden was some closet conservative, rather than the man who came out for same-sex marriage before Obama did and helped him pass the Affordable Care Act. But the lefty pundits, most of them far younger, clearly pine for a Kamala or Cory or Beto or Mayor Pete — or even Bernie, his fellow septuagenarian.

In anticipating some of these attacks, Biden has been on something of an apology tour — saying for instance of the Anita Hill hearing that he chaired in 1991, "To this day I regret I couldn't come up with a way to give her the kind of hearing she deserved."

Against this backdrop, the accusation by Flores, a former Democratic assemblywoman in Nevada, exploded with considerable force. She has granted numerous interviews since writing a piece for New York magazine, including an appearance on CNN's "State of the Union."

Backstage at a rally, Biden put his hands on her shoulders from behind, Flores writes, "leaned further in and inhaled my hair. I was mortified. I thought to myself, 'I didn't wash my hair today and the vice-president of the United States is smelling it. And also, what in the actual f---? Why is the vice-president of the United States smelling my hair?'" He proceeded to plant a big slow kiss on the back of my head. My brain couldn't process what was happening. I was embarrassed. I was shocked. I was confused."

Now there's no way to defend that, given how upset Flores says she was. (Yes, she was a Bernie backer in 2016 and is trying to knock Joe out of the race, but that doesn't make it untrue.) What's more, we've all seen the photos and footage of Biden being too handsy with women of all ages.

In her Jake Tapper interview, Flores said she finally felt compelled to speak out because Biden's behavior, documented over the years, was "frankly dismissed by the media and not taken seriously."

The former VP rushed out a statement Sunday morning saying he's "offered countless handshakes, hugs, expressions of affection," but "not once — never — did I believe I acted inappropriately. If it is suggested I did so, I will listen respectfully."

And some women are saying hey, that was just Joe being Joe. Mika Brzezinski, who's quite outspoken about sexual harassment, said on MSNBC: "There's a lot of things I know about Joe Biden – I've known him for a long time — he is extremely affectionate, extremely flirtatious in a completely safe way."

'Halloween' actress Jamie Lee Curtis is calling out former Vice President Joe Biden for his role in the 1991 Senate confirmation hearings for now Supreme Court Justice Clarence Thomas saying he should apologize to Anita Hill. Curtis said in a tweet on Wednesday that Biden should, 'go to her house and apologize to her face.' This comes after recent comments by Biden bemoaning his own role in the confirmation hearings.

And the inevitable follow-up, from the Harford Courant:

"A Connecticut woman says Joe Biden touched her inappropriately and rubbed noses with her during a 2009 political fundraiser in Greenwich when he was vice president ...

"'It wasn't sexual, but he did grab me by the head,' Amy Lappos told The Courant Monday. 'He put his hand around my neck and pulled me in to rub noses with me. When he was pulling me in, I thought he was going to kiss me on the mouth.'"

To be sure, Biden partisans can argue that Donald Trump has been accused of worse behavior with women. But this is not just about whether Biden crossed a line with Lucy Flores or other women. It's about how a 76-year-old man copes with such accusations in the #Me-Too era.

Maybe the pundits are trying to compensate for their previously soft treatment of the gaffe-prone Biden. But I believe the latest episode is fueled by a journalistic conviction that the former veep is ideologically suspect or a relic of the past.