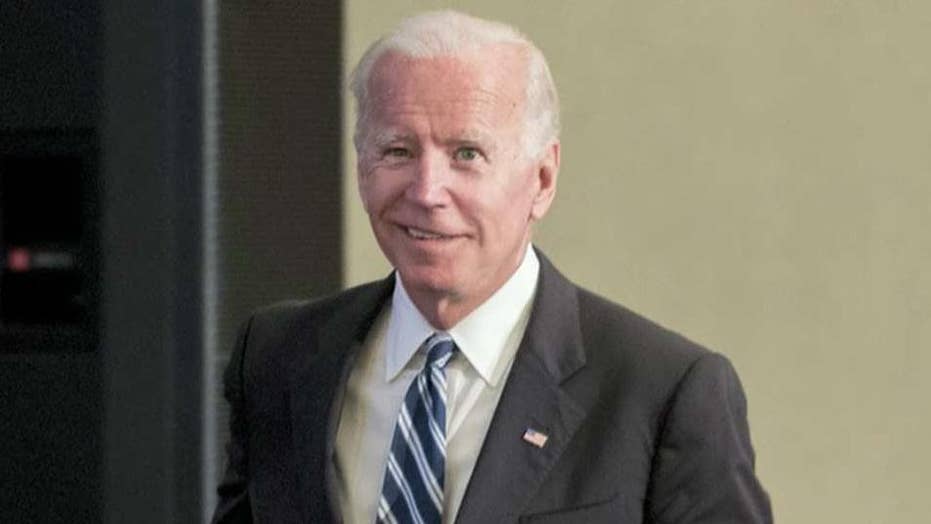 A second woman has come forward to accuse former Vice President Joe Biden of inappropriate touching, further complicating the prospective presidential candidate's political future and intensifying what has become a social media reckoning on his previous public behavior with women.

Amy Lappos, 43, first told the Hartford Courant in an interview published Monday that Biden grabbed her during a $1,000-per-plate October 2009 fundraiser for Connecticut Democrat Rep. Jim Himes. Lappos, who initially posted about the episode on Facebook on Sunday, was working as an aide for Himes at the time.

Amy Lappos tells Fox News this photo shows her with Joe Biden at the fundraiser in 2009. (Amy Lappos)

A Biden spokesman referred Fox News' requests for comment on the new allegation to Biden's earlier statements, in which Biden and his team strongly denied accusations the former vice president acted inappropriately around women. Still, they vowed to listen to any allegations or concerns.

Lappos, who provided Fox News with photos she said shows herself and Biden at the event, charged that the episode occurred inside the Greenwich home of an affordable housing developer, and that Himes was not present at the time.

A picture of Biden at the 2009 fundraiser. (Amy Lappos)

Lappos' accusations came on the heels of a similar claim by former Nevada lieutenant governor candidate Lucy Flores, who accused Biden of inappropriate sexual conduct during a 2014 campaign event. Flores alleged in an article Friday that Biden "plant[ed] a big slow kiss on the back of my head."

Amy Lappos tells Fox News this photo also shows her with Joe Biden at the fundraiser in 2009. (Amy Lappos)

Flores endorsed Bernie Sanders in a 2016 Facebook post, served on the board of the Sanders-aligned Our Revolution group, and campaigned publicly on his behalf. In a statement, a Biden spokesperson denied that the vice president or his staff had been aware that Flores was uncomfortable.

And the 76-year-old prospective 2020 presidential candidate issued a statement Sunday strongly denying wrongdoing -- but promising to "listen respectfully" to any accusations of misconduct.

In a statement to Fox News Monday afternoon, Lappos said she was speaking out "because I am so disappointed in my party, the Democratic Party, and the way we have treated Lucy Flores. ... Biden’s statement in response to Lucy’s article was not only disturbing it was disgusting. I stand my Lucy and any woman with the courage to come forward regarding men and they way they treat women."

Lappos added: "Uninvited affection is not okay. Objectifying women is not okay. Men who invade a woman’s personal space, touch women inappropriately, sexually harass women and feed rape culture have no place in a position of power. Referring to this type of behavior as “simply affection” or 'grandpa-like' or 'friendly' is ridiculously dismissive and part of the problem. Saying 'but Trump….' is dangerous and sets the bar for democratic men far below where it should be."

Flores' claim prompted a slew of social media posts highlighting what critics said amounted to Biden's clearly inappropriate behavior in public view.  Some images showed Biden alongside women ranging from a biker to the wife of the former defense secretary to actress Eva Longoria – raising questions about whether the images will haunt Biden in the #MeToo era as he moves toward a rumored 2020 presidential run.

For her part, Lappos told Fox News that Biden's apparent behavior was disqualifying: "If Biden truly supports women and gender equality he would step aside and support one of the many talented and qualified women running. The same goes for the other men who have thrown their hat in the ring. Women are 52 percent of the population. We are not a minority, we are the majority. It is time we are represented as such. After 45 male presidents it is time we elect a woman."

LAS VEGAS, NV - NOVEMBER 01: Actress Eva Longoria (L), co-founder of the Latino Victory PAC, and U.S. Vice President Joe Biden embrace after speaking at a get-out-the-vote rally at a union hall on November 1, 2014 in Las Vegas, Nevada. Biden and Longoria are stumping for Nevada Democrats ahead of the November 4th election. (Photo by Ethan Miller/Getty Images)

But, in a fiery statement Monday, a Biden spokesman pushed back on the accusations made against him at that point, saying many photos of Biden have been misinterpreted -- even according to some of the women who appear in them -- while others were blatant "smears and forgeries."

"One such instance involved Stephanie Carter, the wife of former Defense Secretary Ash Carter, and the other Senator Chris Coons’ daughter," Biden spokesman Bill Russo said. "Each was ostensibly captured by a photo that some have interpreted in a way that is reflected consistently, and without scrutiny, in the reporting. Ms. Flores herself has cited the Carter photo as an example of the behavior she experienced.

"Here’s the problem: in neither case is the often repeated and recirculated interpretation true," Russo continued. "Both Stephanie Carter and Senator Coons have now felt compelled to speak out to put these ugly urban legends to rest."

Russo cited an interview in which Carter corrected the record on her own experience with Biden, as well as a Washington Post article in which Coons' daughter similarly absolved Biden of misconduct.

Vice President Joe Biden leaning in to say something to Maggie Coons, next to her father Sen. Chris Coons, D-Del., in January 2015. (AP Photo/Jacquelyn Martin, File)

"And they are not the only ones," Russo said. "There are other, even more insidious examples of claims about the Vice President that have no foundation: the use of photoshopped images and other manipulations of social media. Perhaps most galling of all, a cropped photo of the Vice President comforting his grandson outside of his son Beau’s funeral has been used to further this false narrative."

Russo concluded: "The important conversation about these issues are not advanced, nor are any criticisms of Vice President Biden validated, by the continued misrepresentation of the Carter and Coons moments, or a failure to be vigilant about a cottage industry of lies."