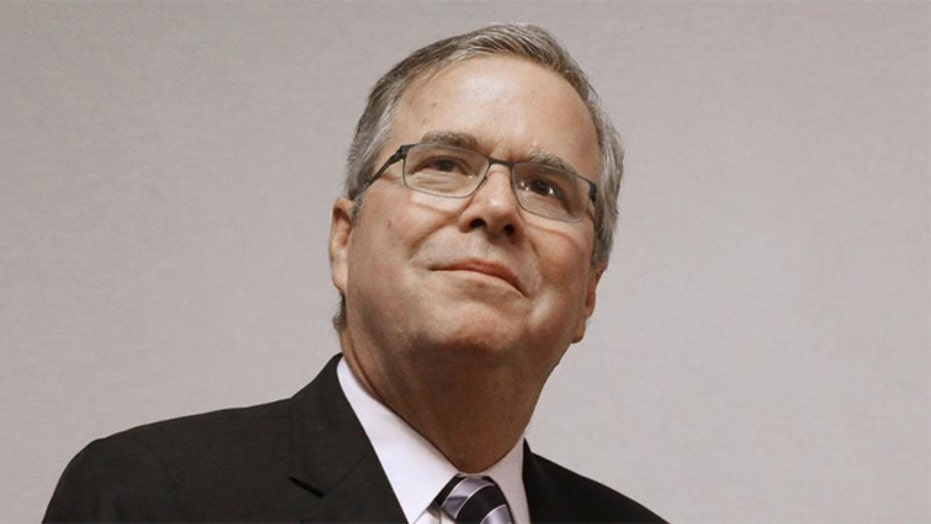 Jeb Bush to give speech on US foreign policy

Foreign policy could play a large role in 2016 election

Jeb Bush is unveiling a foreign policy team that includes several big names from his brother's presidential administration, even as the potential Republican presidential candidate stresses the differences between them.

The former Florida governor sought to lay out his foreign policy views in a speech to the Chicago Council on Global Affairs on Wednesday. In the address, he said he's "fortunate" to have family members who shaped foreign policy and recognizes his views will be "held up in comparison to theirs."

But, Bush said, "I'm my own man. And my views are shaped by my own thinking and my own experiences."

At the same time, at least during the run-up to an expected campaign, Bush is consulting with a host of former officials who served under the George W. Bush administration.

A Bush aide told Fox News that the former officials compose a "preliminary and informal group of foreign policy experts committed to support Governor Bush who he will consult with in the coming months as he explores a potential run."

A Democratic National Committee memo said: "Today, Jeb Bush will be in Chicago to recast his foreign policy. He's going to try to separate himself from his brother's disastrous foreign policy -- he's going to argue that he's his own man. Is he? ... Jeb Bush is one of the few people left who still stands by the decision to rush into Iraq."

While Bush has not yet formally declared his candidacy, he is widely expected to run in 2016.

Some foreign policy experts say Bush must go further in distinguishing himself from his brother.

Peter D. Feaver, a former national security adviser to George W. Bush, said that includes taking a stance on whether George W. Bush's decision to invade Iraq in 2003 was appropriate.

Jeb Bush did not answer that question directly when asked about it last week after an event in Florida for his mother's literacy charity.

"The answer he gave last week, about not litigating the past, that's not a satisfying answer," Feaver said. "He has to come up with a better answer than that."

But Feaver said Bush, should he win election, would inherit an international landscape far different than the one his brother left behind. Instead of the lurking threat of Al Qaeda, Jeb Bush would take on a map dotted with violent and unstable spots that include Syria, Iraq and Ukraine.

It's something Jeb Bush appears ready to address, according to his speech on Wednesday.

"The United States has an undiminished ability to shape events and build alliances of free people," he said. "We can project power and enforce peaceful stability in far-off areas of the globe."

He criticized the current administration, saying the "great irony" of President Obama's leadership is he won office calling for greater engagement but has "left America less influential in the world."