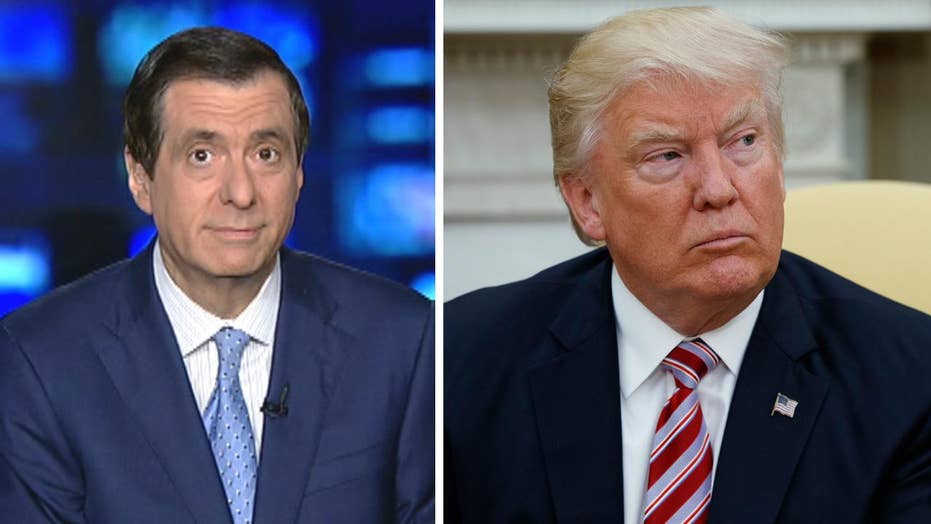 When President Trump sat down with Lester Holt yesterday, he essentially altered the version of James Comey’s firing that his top aides have been pressing in public.

“I was going to fire regardless of recommendation,” he told the NBC anchor. The recommendation in question was a two-page memo from Deputy Attorney General Rod Rosenstein, who had been on the job for two weeks.

Rosenstein is “highly respected,” Trump said, “he made a recommendation, but regardless of recommendation I was going to fire Comey” (who he called a “showboat” and a “grandstander”).

At Wednesday’s press briefing, Sarah Huckabee Sanders was asked: “So it's the White House’s assertion that Rod Rosenstein decided on his own, after being confirmed, to review Comey’s performance?”

“Absolutely,” she replied. “And I think most of America had decided on their own that Director Comey was not the person that should be leading the FBI.”

But if the president asked for a review to buttress a move he planned to take anyway, then Rosenstein’s letter isn’t the crucial document that was being advertised.

Sanders told ABC’s Jon Karl yesterday she hadn’t had the chance to ask the president that question about whether he had already made up his mind. “Nobody was in the dark…You’re trying to create this false narrative,” she said.

None of this affects the core question of whether the president acted properly in canning his FBI director. But it does underscore that the administration’s rollout of this controversial decision has been shaky.

The media narrative has moved on to whether the White House is engaging in some kind of coverup, with newspaper accounts challenging some of the administration’s key points.

Chief among them: Trump’s contention that Comey told him three times that he wasn’t under investigation in the Russia probe. The Wall Street Journal quoted a Comey associate yesterday as saying that was “almost farcical.”

If true, would that have been improper on Comey’s part? “I don’t see that as a conflict of interest,” Sanders said yesterday.

The Washington Post reported that Rosenstein had threatened to resign after being portrayed as the catalyst for Comey’s dismissal. NBC followed up by quoting two unnamed Justice Department officials as saying that wasn’t true.

The New York Times reported that “in private, aides said, Mr. Trump has been nursing a collection of festering grievances, including Mr. Comey’s handling of the Russia investigation, his seeming lack of interest in pursuing anti-Trump leaks and the perceived disloyalty over the wiretapping claim.”

That would undermine the White House contention that Trump’s decision was mainly about Comey’s handling of the Hillary Clinton email investigation and not the Russia probe.

Some of this gets down in the weeds. But it’s being fueled by the apparent conflicts between the White House explanations and the press accounts. And Holt elicited key information with his solid questions.

Sarah Sanders told reporters that unlike the public, they are “obsessed with this story.” Maybe so. But a president firing an FBI director under these circumstances is an earthquake that will have aftershocks for some weeks to come.