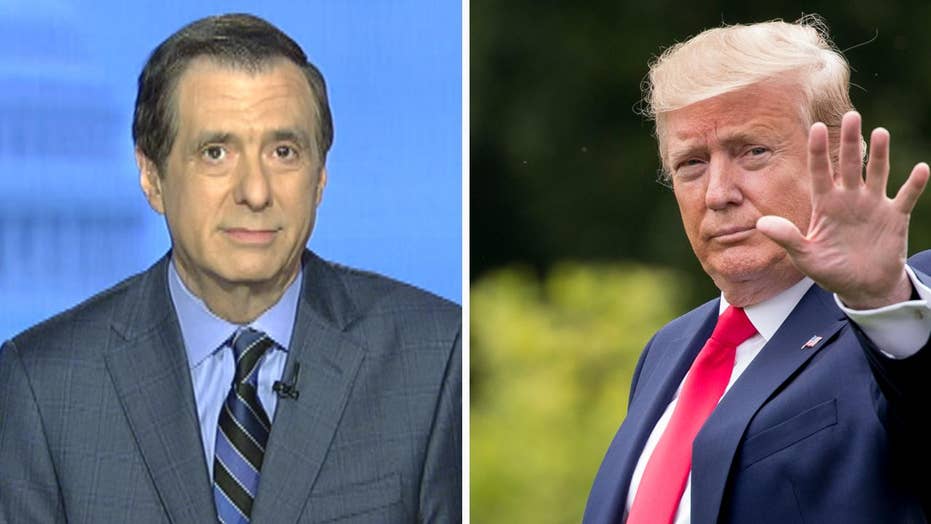 'MediaBuzz' host Howard Kurtz questions whether the New York Times story about Trump losing over $1 billion between 1985 and 1994 is actually big news.

The dense and lengthy New York Times report says a great many things about Donald Trump's finances, but it does not say one potentially damaging thing: that he broke the law.

Instead, it is a portrait of a high-flying developer who lost a whole lot of money at times — mostly other people's money — while at times also making money.

It is a portrait of a businessman who often avoided paying taxes — legally — just like most entrepreneurs in the loophole-ridden real estate business.

JOY BEHAR ASKS TRUMP VOTERS: 'WOULD YOU LET HIM INVEST YOUR MONEY?'

I'm not defending his conduct. I think he should have released his tax returns as a presidential candidate, just like every other nominee of the past 40 years. Trump's refusal to do so has opened the door to endless speculation and leaked material as journalists and others ask what he's got to hide.

What's more, we generally knew that Trump used a mountain of debt and lots of tax writeoffs in building his empire and that he lost zillions on such ventures as the bankrupt casinos and an airline shuttle. Even the Times says the disclosures do not "offer a fundamentally new narrative of his picaresque career."

And while anchors and pundits keep pronouncing Trump "the biggest loser," he's still got a plane, Trump Tower, Mar-a-Lago and, oh right, the presidency.

The Times obtained printouts from Trump's IRS transcripts for the tax years 1985 to 1994, when he surged to national prominence. These are not the most recent returns that the Democratic House is demanding from the Treasury.

The red-ink revelation: "The numbers show that in 1985, Mr. Trump reported losses of $46.1 million from his core businesses — largely casinos, hotels and retail space in apartment buildings. They continued to lose money every year, totaling $1.17 billion in losses for the decade. In fact, year after year, Mr. Trump appears to have lost more money than nearly any other individual American taxpayer."

And something no politician wants to advertise: "Overall, Mr. Trump lost so much money that he was able to avoid paying income taxes for eight of the 10 years."

Gingrich: New York Times has descended to the level of the Kardashians with reveal of Trump tax records

'This kind of one-sided, dishonest attack is part of what's sickening American politics,' former House Speaker Newt Gingrich says after the paper reports on 10 years of the president's tax returns.

Trump bragged about using depreciation to cut his taxes in his 1987 book "The Art of the Deal." And the Times acknowledges that "the tax code also lets business owners like Mr. Trump use losses to avoid paying tax on future income — a lucrative deduction intended to help troubled businesses get back on their feet." (Ordinary taxpayers can also write off property depreciation and losses, but this is a pittance compared to what big-time developers do.)

The Times quoted Trump lawyer Charles Harder as calling the story "demonstrably false," and saying the paper’s assertions "about the president's tax returns and business from 30 years ago are highly inaccurate."

Then came the inevitable Trump tweets:

"Real estate developers in the 1980’s & 1990’s…were entitled to massive write offs [sic] and depreciation which would, if one was actively building, show losses and tax losses in almost all cases. Much was non monetary. [sic] Sometimes considered 'tax shelter,' you would get it by building, or even buying. You always wanted to show losses for tax purposes....almost all real estate developers did - and often re-negotiate with banks, it was sport. Additionally, the very old information put out is a highly inaccurate Fake News hit job!"

So he acknowledges and justifies the practices — all true — and then calls it "fake news."

By the way, candidate Trump bragged about his big writeoffs in a 2016 fall debate, declaring, "I love depreciation!"

One side note is Trump's brief moonlighting as a corporate raider. From 1986 through 1988, Trump "made millions of dollars in the stock market by suggesting that he was about to take over companies. But the figures show that he lost most, if not all, of those gains after investors stopped taking his takeover talk seriously."

So what's the bottom line, to use a green-eyeshade term?

But there's no requirement that a businessman not take every available deduction to avoid paying taxes. And we've known that Trump went through boom-and-bust cycles, including the Atlantic City casinos that went belly-up, in the past. A report that he was doing these things 30 years ago, without any evidence of improper conduct, isn't going to change many minds.