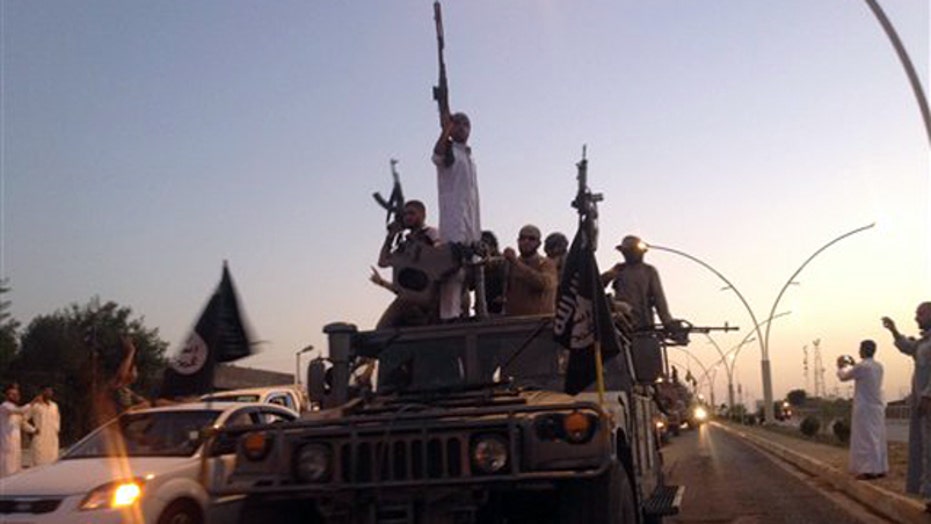 What is the danger ISIS poses to US?

Iran reportedly has sent military advisers into Iraq and dispatched the head of its infamous Quds Force to help Baghdad strategize in its fight against Sunni militants, as the United States takes similar steps despite concern about Tehran's involvement.

While not in lockstep, Tehran and Washington are now taking a similar approach in helping the beleaguered government in Baghdad.

Fox News confirms that Iran is flying surveillance drones over Iraq, something the U.S. also is doing.

The New York Times reported that Iran, in addition, is sending tons of military equipment to the fellow Shiite-led government in Iraq and is dispatching military advisers. According to the Times, about a dozen officers from Iran's Quds Force have been sent into the country.

This comes as the Obama administration sends up to 300 military advisers into Iraq; according to officials, 180 so far are on the ground in Baghdad.

They have not left the city, and they're working on setting up a Joint Operations Center. It is unclear whether and when they might leave Baghdad to set up a similar center in the northern part of the country.

The apparent involvement, however, of Iran as well as Syria is raising red flags in the Obama administration, with top officials voicing concern that their involvement could create a "flashpoint" that deepens sectarian tensions in the country. A senior U.S. official also confirmed to Fox News earlier this week that there are indications Syrian aircraft launched airstrikes against Sunni militant targets in Iraq on Monday.

Asked about these developments on Wednesday, Secretary of State John Kerry warned about actions "that might exacerbate the sectarian divisions that are already at a heightened level of tension."

He added: "It's very important that nothing takes place that contributes to the extremism or could act as a flashpoint with respect to the sectarian divide," Kerry said, speaking in Brussels in the middle of a multi-country tour aimed at easing the Iraq crisis.

Kerry, noting reports of Iran and Syria intervention, stressed the need for a new Iraqi government, so it can make decisions without "outside forces moving to fill a vacuum."

Speaking in Washington, White House Press Secretary Josh Earnest also said that the solution to the Iraq crisis does not involve militias or the "murderous Assad regime" in Syria.

The involvement of Iran and Syria further complicates the Obama administration's position in trying to shore up the embattled Iraqi security forces as they face radical militants with the Islamic State of Iraq and Syria, or ISIS.

In this case, Iran and Syria -- long-time foes of the U.S. -- find themselves with aligning interests in seeking to stabilize Iraq's government.

However, while Iran wants to preserve Shiite control of Iraq's government, the U.S. is pressing leaders in Baghdad to create a more inclusive political system.

Officials said recent strikes in Iraq appeared to be the work of Syrian President Bashar Assad's government, which is locked in a bloody civil war with opposition groups. The target of the attacks was the extremist group ISIS, which has been fighting along with the rebels opposed to Assad and has since moved swiftly across the border into Iraq.

The White House said intervention by Syria was not the way to stem the insurgents, who have taken control of several cities in northern and western Iraq.

"The solution to the threat confronting Iraq is not the intervention of the Assad regime, which allowed [ISIS] to thrive in the first place," said Bernadette Meehan, a National Security Council spokeswoman. "The solution to Iraq's security challenge does not involve militias or the murderous Assad regime, but the strengthening of the Iraqi security forces to combat threats."