Winners and losers from the Iowa caucuses

On 'Hannity,' panel provides insight into the voting

The future of the 2016 presidential race ain’t what it used to be.

Clinton's apparent razor-thin win in a photo-finish with Bernie Sanders does little to blunt the Vermont senator's momentum heading into the Granite State, where he enjoys a comfortable polling lead. The Associated Press and state Democratic Party called the Iowa race for Clinton on Tuesday.

On the Republican side in Iowa, Texas Sen. Ted Cruz beat billionaire businessman Trump -- but it's Florida Sen. Marco Rubio's closing surge to nearly overtake Trump that overnight changes the dynamic of the GOP battle.

The New Hampshire primary next Tuesday, where no fewer than five candidates are battling for the No. 2 spot in the polls under Trump, could make the GOP leaderboard even more crowded.

On the Democratic side, Clinton was declared the winner of Monday’s Iowa contest, but only by a fraction of a percentage point.

Sanders, en route to New Hampshire overnight, suggested the results prove decisively he’s no longer a “fringe candidate,” as some had described him.

“We’re in this to the convention,” Sanders vowed.

To be sure, the 2016 outcome on the Democratic side had echoes of 2008, albeit with a better outcome for Clinton. In 2008, Clinton placed third while underdog Barack Obama won, using that momentum to eventually secure the nomination.

In this case, Clinton scored what appeared to be a narrow win – but in a contest where she used to be the overwhelming front-runner, at one point leading Sanders by roughly 30 points in the polls.

She now heads to New Hampshire where Sanders holds a wide lead in the polls. Like in 2008, she could very well go 1-1 with her closest rival in the first two contests.

Further, the race essentially begins at a near-draw in the delegate count. Sanders noted that Iowa's 44 Democratic national convention delegates would be distributed almost evenly between the two candidates. The Associated Press reported that Clinton had captured at least 22 delegates to Sanders' 21, with the remaining one going to the statewide winner.

Republicans gleefully described the returns as a problem for Clinton.

“It’s a total disaster for Hillary Clinton,” Republican National Committee Chairman Reince Priebus told Fox News, predicting the Democrats could be “even more unclear in April than we are” in their nominating contests.

Nevertheless, the Clinton campaign touted their narrow delegate lead early Tuesday as a victory, plain and simple – though it appeared some precincts had stray delegates decided by coin toss.

"Statistically, there is no outstanding information that could change the results and no way that Senator Sanders can overcome Secretary Clinton's advantage,” the campaign said.

A number of news outlets, including Fox News, have not yet formally called the contest for the former secretary of state.

Sanders said the results sent a “profound message” to the media and political establishment.

Anti-establishment overtones also were apparent on the Republican side, where Cruz claimed a more resounding victory in the state.

In the Republican campaign, Cruz fought hard in recent weeks to make up lost ground in the polls and was helped in part by a sophisticated ground operation. He also hammered Trump for his decision to skip last week's Republican debate.

“For months they told us we had no chance. … They told me I needed to wait my turn,” Rubio said. “But tonight … here in Iowa, the people in this great state sent a very clear message. After seven years of Barack Obama, we are not waiting any longer to take our country back.”

With almost all precincts reporting, Cruz had 28 percent, Trump had 24 percent and Rubio had 23 percent. Retired neurosurgeon Ben Carson placed a distant fourth in the race with 9 percent, while Kentucky Sen. Rand Paul placed fifth with 5 percent.

Former Florida Gov. Jeb Bush, the one-time front-runner on the Republican side, placed a disappointing sixth.

“New Hampshire has a tendency to reset the race,” Bush told Fox News.

A big question heading into next week will be whether Trump’s second-place showing in Iowa affects his sizeable lead in the Granite State.

Trump, for his part, argued he beat initial expectations by placing second and predicted he'd still win in New Hampshire.

“We will go on to get the Republican nomination, and we will go on to easily beat Hillary or Bernie or whoever the hell they throw up there,” he said. He closed his speech by saying: "I think I might come here and buy a farm, I love it.” 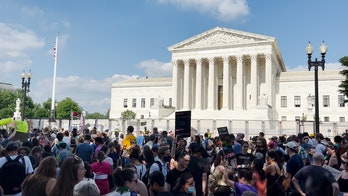 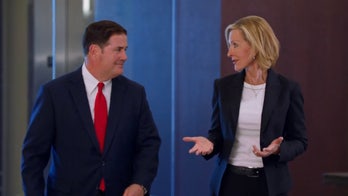 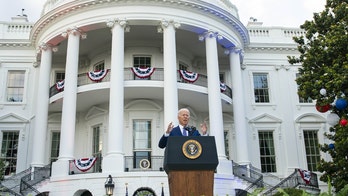