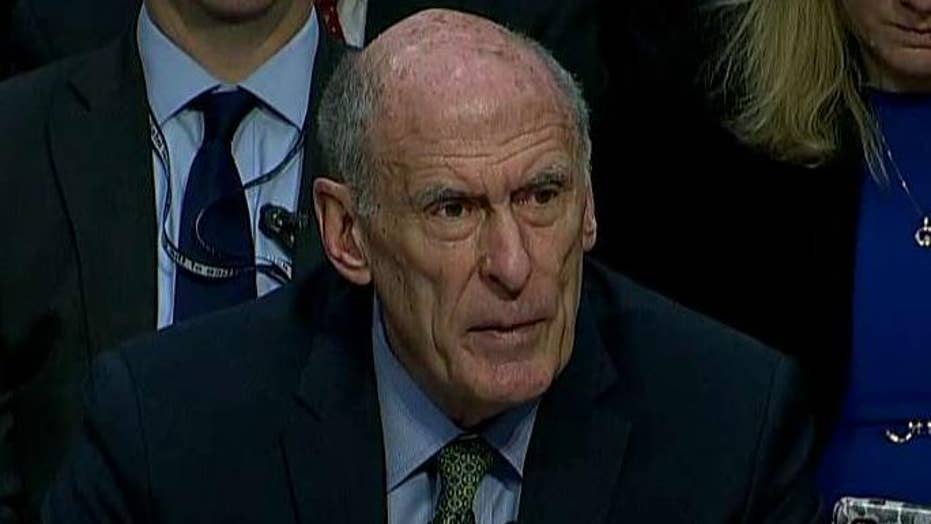 Coats: North Korea continues to pose increasing threat to US

Top U.S. intelligence officials warned lawmakers Tuesday not to be fooled by North Korea’s diplomatic outreach at the Olympic Games, reminding Congress at a high-profile hearing that the dictatorship still represents an “existential threat” to the U.S.

The appearance of Kim Jong Un’s sister Kim Yo Jong at the Olympics has led to gushing coverage from some American media outlets, with stories suggesting Pyongyang's delegation is diplomatically outflanking the U.S.

Kim Yo Jong has been given positive coverage from news outlets. (Reuters)

But at a Senate Intelligence Committee hearing, top officials and lawmakers said nothing has changed from the oppressive regime, which has been ramping up its nuclear program in recent months.

“From my point of view I think it’s nothing but a stall by the North Koreans to further develop what they’re trying to do and I suspect, in my judgment, we need to be very, very cautious of this,” he added.

Director of National Intelligence Dan Coats agreed with the assessment, and said that North Korea's aggression was still an “existential threat” potentially to the U.S. and also to North Korea itself.

“The provocative nature and the instability Kim has demonstrated is potentially a significant threat to the United States. Decision time is coming ever close in terms of how we respond to this,” he said.

Lt. Gen. Robert Ashley, head of the Defense Intelligence Agency, described a “much more deliberate effort” in terms of readiness from Kim as opposed to his father. He also advised that “we should not be misled” by recent events in the Olympics.

CIA Director Mike Pompeo added that Kim still looks to threaten the U.S. and that there has been no change in the regime's outlook despite the diplomatic outreach.

“There is no indication there is any strategic change in the outlook for Kim Jong Un in his desire to retain his nuclear capacity to threaten the United States of America, no change there,” he said.

Tuesday's hearing covered considerable ground. The officials also warned about the possibility that Russia would look to interfere in the 2018 election cycle.

"We expect Russia to continue using propaganda, social media, false flag personas, sympathetic spokesmen and other means to influence, to try to build on its wide range of operations and exacerbate social and political fissures in the United States," Coats said.

"There should be no doubt that Russia perceives its past efforts as successful, and views the 2018 U.S. midterm elections as a potential target for Russian influence operations," he said.

Top intelligence leaders testify that the threat from Russia will neither change nor stop.

Officials refused to be drawn into specifics but said they would offer further details in a classified session in the afternoon.

The comments came on the heels of those made by Secretary of State Rex Tillerson to Fox News last week, in which he said there was already evidence of Russian attempts to meddle in the 2018 midterms.

“I don't know that I would say we are better prepared, because the Russians will adapt as well,” Tillerson said. “The point is, if it's their intention to interfere, they are going to find ways to do that. We can take steps we can take but this is something that, once they decide they are going to do it, it's very difficult to preempt it.”