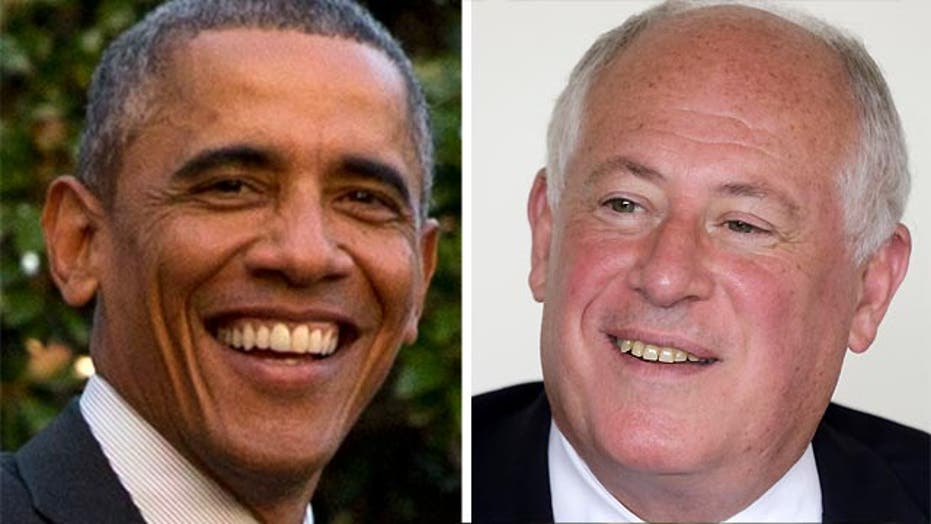 Unlike some other Democrats whose jobs depend on the November elections, Illinois Gov. Pat Quinn is not dodging an association with President Obama.

Despite a tough election, Quinn is embracing both the president and first lady.

The president attended a fundraiser for the governor on Thursday, before delivering a speech on the economy that was heavy on election-year rhetoric.

Earlier, first lady Michelle Obama cut a radio ad for Quinn. “Pat’s fighting to raise the minimum wage,” she says in the ad, before reminding listeners she votes in Chicago. “For this election, Barak and I are casting votes for Pat Quinn.”

Quinn is in a statistical dead heat with Republican challenger and political newcomer Bruce Rauner. A few polls have put one or the other out in the lead, but the RealClearPolitics average puts the incumbent only a point-and-a-half ahead, 43.3 to 41.8 percent.

So, both candidates are trying to appeal to the everyman in Illinois. “If Pat Quinn wins, it’s because he is a populist,” pollster Mike McKeon said.

However, their attempts to appear average border on risible.

The former lieutenant governor, who moved up to the mansion, poses in a golf shirt and pretends he cuts his own lawn in one ad. “State government needed to be cut, like my lawn. So, I got to work,” Quinn says before he pushes a rickety manual mower across the grass, while wearing khakis.

Rauner, a North Shore billionaire, often poses in a workingman’s Carhartt jacket. In one ad, he highlights a rusty old van. “I've had this van 20 years,” Rauner says.

The attempts to connect take a backseat, however, to the negative barbs from the two candidates -- who seem to feel the attacks are working and appear to harbor a genuine dislike for each other.

A meeting with Quinn and Rauner before the Chicago Tribune editorial board melted down into a bickering match with extended index fingers. Quinn called Rauner a “profiteer,” who made “a fortune on the misfortune of others.”

Rauner countered with a crack that involved the governor’s male pattern baldness. He said the only difference between Quinn and the now-imprisoned former Gov. Rod Blagojevich was the hair.

The ads run negative and blanket the airwaves. When it comes to mud, both candidates leave behind rich soil to be harvested – Quinn, for his years in politics; Rauner, for the time spent financing companies. Neither candidate has been in trouble himself, but some of the executives and managers they put in charge have.

Rauner chaired an equity firm called GTCR, which left in its wake the bankruptcy of Home Banc Mortgage Corp. The provided fodder for an ad claiming the CEO fled with a $5 million parachute, while the employees received $20 gift cards along with their pink slips.

Quinn created the Neighborhood Recovery Initiative, which took in $54.5 million and apparently blew it. A panel of lawmakers will convene next week to interview managers and determine if there was any criminal wrongdoing. Quinn is not directly in the crosshairs, but close enough to drive the partisan rhetoric.

What voters miss in the process is any specific information about plans to improve Illinois’ struggling budget or underfunded pension. The candidates are largely running on a message that they’re not as bad as the other guy.