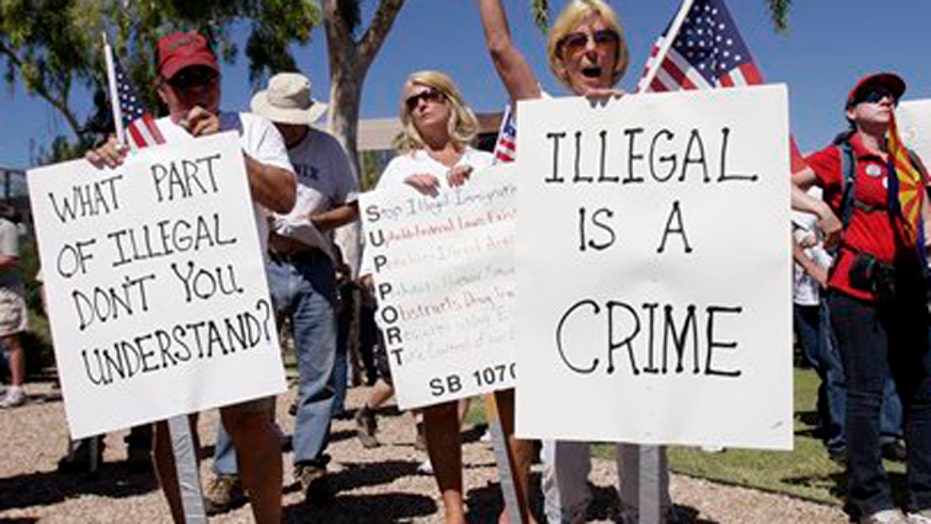 Immigration debate: Will there be reform?

The union representing 7,000 immigration enforcement officers and employees has a message for the so-called Gang of Eight senators working on an immigration deal: Not so fast.

The National ICE Council voiced opposition to the plan, and said the proposal prioritizes "amnesty" over enforcement. The blistering comments on a conference call Wednesday afternoon were the latest signal from certain interest groups that support for the framework may not be as strong as negotiators claimed over the weekend.

An agreement on guest-worker visas between big business and big labor on Friday was touted by the "Gang of Eight" senators -- who have been negotiating a draft bill -- as a breakthrough. "With the agreement between business and labor, every major policy issue has been resolved on the Gang of Eight," Sen. Chuck Schumer, D-N.Y., said Sunday.

But Chris Crane, head of the National ICE Council, took issue with Schumer's timeline for how a provision allowing millions of illegal immigrants to seek citizenship would work. Schumer said they would be given legal status "first," after which the border would be secured. The final step, Schumer said, would be to allow them to seek citizenship.

"The plan of the Gang of Eight appears to be legalization or amnesty first, and then enforcement," Crane said. "That's a big problem for us."

Crane warned that the current framework appears to do nothing to enhance interior enforcement, which is the charge of Immigration and Customs Enforcement. "If we don't take care of the enforcement part of this first, it will never happen. The only thing that will happen will be that 11 million illegal aliens will be legalized, and 10 to 20 years from now the nation will again be facing the influx of another 10 to 20 million illegal aliens," he said.

Crane said the government needs to stop picking and choosing which immigration laws to enforce. "Until this behavior has been addressed, until it's been stopped, the American public should not have any confidence in or support any legislation put forth by the president or anyone in Congress," he said.

Crane and his union recently asked to be included in negotiations toward an immigration overhaul bill but so far have not been invited. Crane voiced concern in a recent letter to the senators that "the last four years have been a roller-coaster of ever-changing arrest authorities" that often force officers to violate the law.

As the ICE union speaks out, other business groups are starting to voice concern about the guest-worker provision, which as discussed would allow a limited number of low-skilled workers into the country on a temporary basis.

The construction industry complained Wednesday about a part of that deal that would cap the number of visas at 15,000 per year for the construction sector. The Associated Builders and Contractors, and five other groups, released a statement Wednesday saying any deal must not "repeat the mistakes of previous reform efforts."

The bipartisan group of senators working on a bill are trying in earnest to iron out disagreements and advance a bill. Democratic leaders, though, have resisted efforts by Republicans to slow the process down.

Sen. Marco Rubio, R-Fla., a member of the bipartisan group, recently urged Senate leadership not to rush the package. Senate Judiciary Committee Chairman Patrick Leahy, D-Vt., wrote in a letter to Rubio Tuesday that while he wants an open process he does not want to encounter "unnecessary delay."

Leahy said he would consider holding one hearing, stressing that the committee has held a number of immigration reform hearings before.