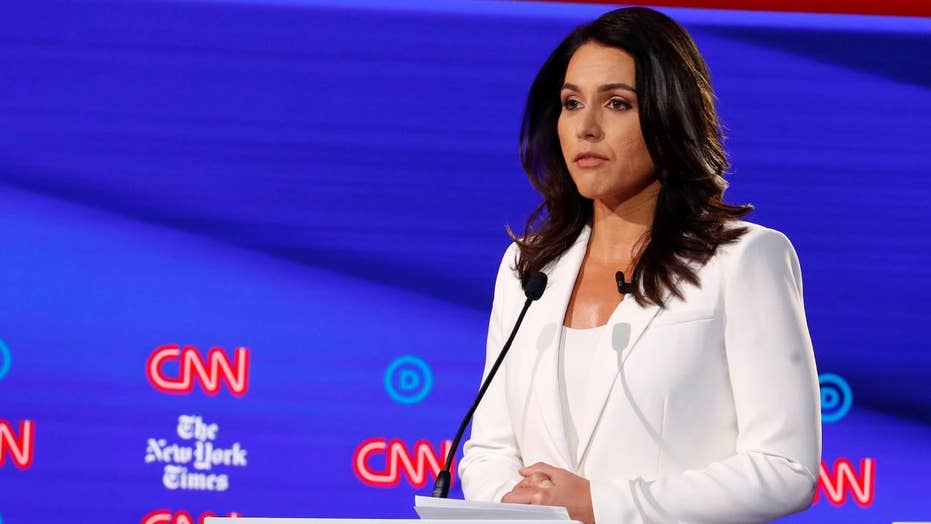 Hillary Clinton in a new interview appeared to float a conspiracy theory that the Russians are “grooming” Hawaii congresswoman and Democratic presidential candidate Tulsi Gabbard to be a third-party candidate in 2020, while claiming 2016 Green Party nominee Jill Stein is "also" a Russian asset.

Appearing on former President Obama aide David Plouffe’s “Campaign HQ” podcast, Clinton did not mention Gabbard specifically by name, though Plouffe ended the podcast by noting Clinton’s “belief that Tulsi Gabbard is going to be a third-party candidate propped up by Trump and the Russians.”

“I'm not making any predictions but I think they've got their eye on somebody who is currently in the Democratic primary and are grooming her to be the third-party candidate,” Clinton said, in apparent reference to Gabbard. “She's the favorite of the Russians. They have a bunch of sites and bots and other ways of supporting her so far.”

She then accused Stein, who ran against her and Donald Trump in 2016, of also being an asset of Russia: "That’s assuming Jill Stein will give it up, which she might not because she’s also a Russian asset."

Other Democrats have made similar claims about Gabbard, a Hawaii Democratic congresswoman and Hawaii Army National Guard major who served in Iraq. For her part, during this week’s presidential debate in Ohio, Gabbard fired back at those accusing her of this.

"Just two days ago, The New York Times put out an article saying that I'm a Russian asset and an Assad apologist and all these different smears,” Gabbard said. “This morning, a CNN commentator said on national television that I'm an asset of Russia — completely despicable."

Gabbard has repeatedly been accused by Democrats of being a "puppet for the Russian government." Gabbard – an anti-war activist who has accused the United States of waging a "regime change war” in Syria – has had to defend her 2017 meeting with Syrian President Bashar al-Assad, the brutal dictator, throughout the campaign.

Others on Friday expressed fear that Gabbard would run as a third-party candidate, helping Trump in his reelection.