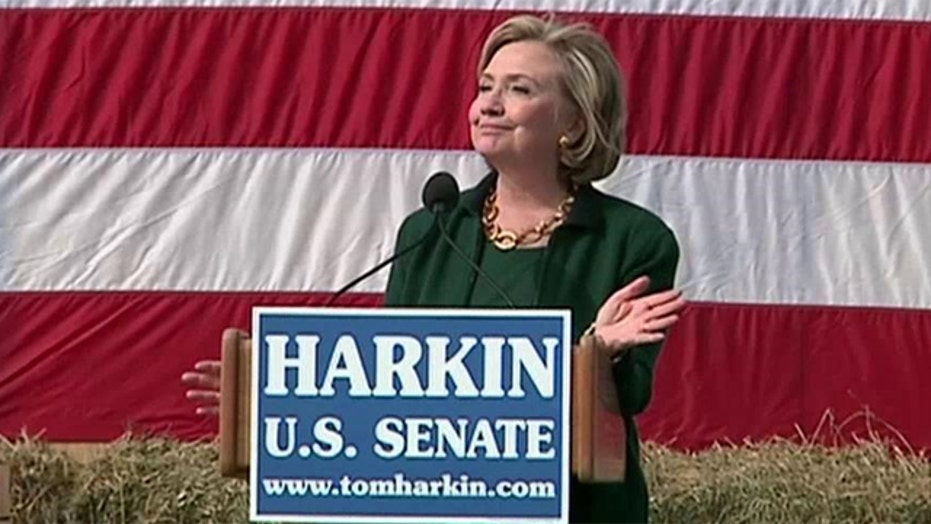 INDIANOLA, Iowa – Hillary Clinton returned to Iowa on Sunday for the first time since her 2008 Democratic presidential primary loss in the state, telling the crowd at the 37th annual Harkin Steak Fry -- “I’m back.”

Clinton, the clear Democratic frontrunner should she make a 2016 White House bid, was greeted with loud cheers at the fundraising event. The event was held in honor of Sen. Tom Harkin, D-Iowa, who is retiring from Congress this year.

The former secretary of state told the crowd of several hundred that her immediate focus is helping fellow Democrats in the midterm elections but that she also thinks about “that other thing,” hinting at a 2016 run.

Missing in her speech were remarks on President Obama's recent efforts to destroy the Islamic State militant group and on other pressing foreign policy issues.

She was joined at the event by husband and former President Bill Clinton, who also spoke.  Clinton urged guests to vote for Democrats on Nov. 4 to "pull this country together, to push this country forward.”

The last time Hillary Clinton was in Iowa she finished third in the state's first-in-the-nation caucus in 2008, behind now-President Obama and John Edwards.

On Sunday, Clinton delivered a keynote speech that focused on such issues as equal pay for women and increasing the minimum wage. She also thanked Harkin for all of his hard work and talked about the changes he had made during his time in the Senate, particularly his efforts to help people with disabilities.

Harkin was critical of Clinton in a recent ABC News interview, saying he still had questions about her foreign and economic policies.

However, on Sunday, Harkin stood side by side with the Clintons, then introduced Hillary by talking about her accomplishments in the Senate and as secretary of state.

Though Clinton has not officially made a decision about a run for the White House, many are already building a network for her run. The Super PAC Ready for Hillary has been drumming up support across Iowa and other key voting states.

Clinton finished her speech by telling the crowd she would not “let another seven years go by.”

“It’s time to write a new chapters in the American dream,” she said.