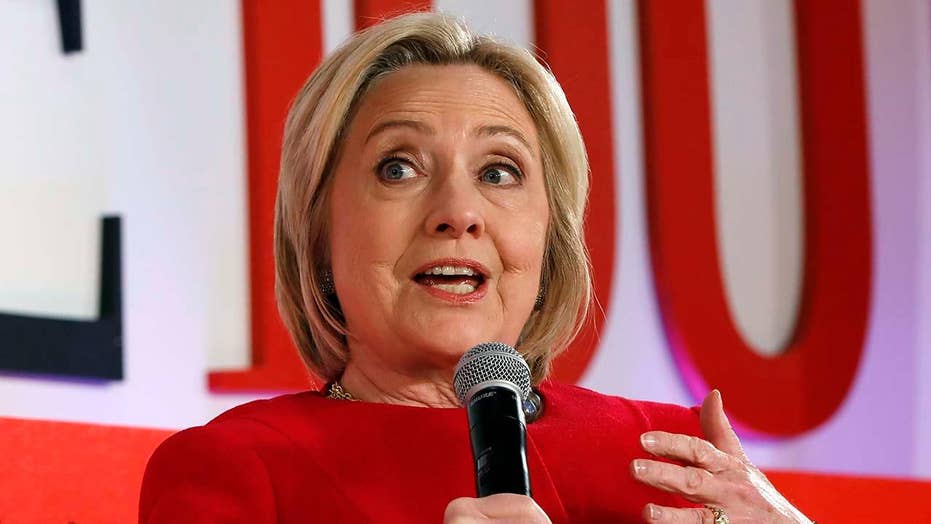 Hillary Clinton suggests the 2016 election was 'stolen' from her

Hillary Clinton hasn’t announced a 2020 run for the White House but remarks she delivered in Houston may have sounded like a campaign speech to some listeners.

Clinton launched a fiery attack Friday against President Trump, claiming the president tweeted a disputed video of House Speaker Nancy Pelosi because he was “running scared.”

"Just look at what's happened in the last 24 hours," she said. "The president and his cronies have been running around spreading a doctored video of Nancy Pelosi. Now, it is sexist trash. But it is also a sign that Trump is running scared."

JOY BEHAR: STAFF WHO KEPT HILLARY CLINTON FROM 'THE VIEW' SHOULD HAVE 'BEEN FIRED'

The former secretary of state, U.S. senator and 2016 Democratic presidential nominee made the remarks at a gathering of the Harris County Democratic Party.

Her speech seemed aimed at motivating Houston-area Democrats to get out the vote for the party’s candidates in 2020.

Earlier this month, House Judiciary Committee Chairman Jerrold Nadler, D-N.Y., declared the U.S. was in a “constitutional crisis,” after Attorney General William Barr declined to testify before his panel after being subpoenaed.

Nadler claimed the Trump administration was “stonewalling” efforts by congressional Democrats to continue probes into possible collusion between the Trump campaign and Russia, even though Special Counsel Robert Mueller’s report on the investigation he led for two years claimed no evidence of collusion existed.

The next day after Nadler spoke, Pelosi said she agreed with him that the nation was in a constitutional crisis.

President Trump, meanwhile, has maintained that the Russia investigations still underway in Congress should end because of Mueller’s findings, and claimed that the Democrats’ continued focus on Russia was designed to motivate their voters in 2020 – and was perhaps proof that the party had not yet recovered from Trump’s defeat of Clinton in 2016.

Some political observers have suggested that Clinton could make a third bid for the presidency in 2020 if none of the more than 20 Democrats currently in the running emerges as a clear threat to deny Trump a second term.

A recent Fox News Poll shows former Vice President Joe Biden leading the Democratic field with support from 35 percent of respondents, followed by Sen. Bernie Sanders at 17 percent and the rest of the pack in single digits.

But a Biden nomination would carry some baggage heading into a general election: The former U.S. senator from Delaware is known for gaffes during public appearances and recently drew criticism for his history of placing his hands on women and girls. In addition, his son Hunter Biden has drawn scrutiny over business dealings in China, Ukraine and Romania.

A sudden loss of confidence in Biden among Democratic voters, coupled with the failure of any of the other Democrats to fill the void, could motivate Clinton – who attracted nearly 66 million votes in 2016 – to make another run at the White House, some argue.

Clinton made headlines in March when she told a New York-area news station that she would not seek the presidency in 2020.

"Aw-shucks," President Trump responded in a Twitter message, "does that mean I won’t get to run against her again? She will be sorely missed!"

But just a day later, “someone close to Clinton” told the New York Times that Clinton didn’t intend for her comments to “close the door on running.”

“She has told her team she is waiting at least to see the Mueller report,” the Times reported, citing the same source.

But has Clinton's chance to win the presidency come and gone? A joint speaking tour with her husband, former President Bill Clinton, resulted in plunging ticket prices in several cities. In December, deals on tickets were being offered on Groupon.

Last week, Newsweek magazine featured the Clintons on its cover with the headline, "Clintons in Exile: What's it like when you're no longer the world's most powerful couple?"