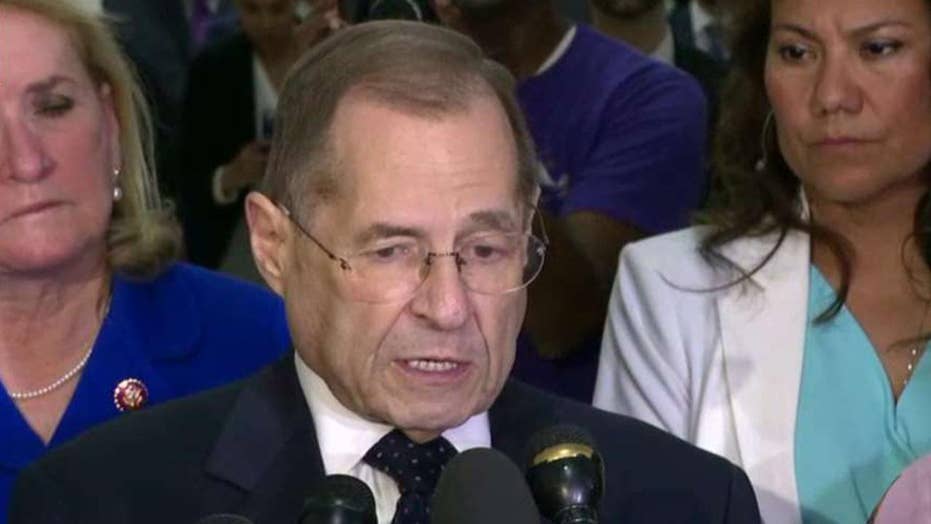 Rep. Jerry Nadler: We cannot have a government where all the information is in the executive branch

House Judiciary Chairman Jerrold Nadler, D-N.Y., declared a "constitutional crisis" on Wednesday, but pushed back on impeachment as an option after his committee voted to hold the attorney general in contempt for defying a subpoena for Special Counsel Robert Mueller’s unredacted Russia report and underlying documents.

"We've talked for a long time about approaching a constitutional crisis. We are now in it," Nadler told the press on Wednesday. Although he pushed back on impeachment as an option, he indicated that the United States was at a critical time of testing whether it could stay a republic or transition into a tyrannical form government.

"They are uniformly rejecting subpoenas from Congress. This means that they have decided to oppose the role of Congress as a coordinate branch of government representing the American people."

"We cannot have a government where all the information is in the executive branch — where the American people and the Congress are stonewalled as to information that they need to make decisions and to know what's going on," he added.

He also compared Trump to former President Richard Nixon in that both refused to release information by citing executive privilege.

"The Supreme Court ruled eight to nothing that the interests of the public in justice and in accountability outweighed the interest of the president in privacy," he said.

When asked why he didn't pursue impeachment proceedings, he said that it may "not be the best answer in this constitutional crisis."

The White House, in asserting executive privilege, accused Nadler of engaging in a "blatant abuse of power."

“Unfortunately, rather than allowing negotiations to continue, you scheduled an unnecessary contempt vote, which you refused to postpone to allow additional time for compromise,” Assistant Attorney General Stephen Boyd wrote to the committee.