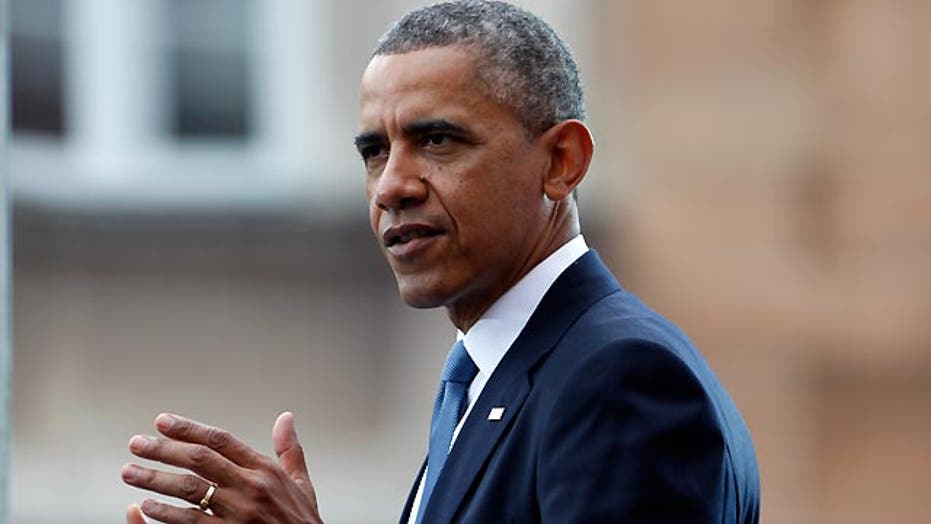 Was prisoner swap a political 'miscalculation' for Obama?

Politicians say it all the time.

"It opens up an enormous can of worms," Sen. Mark Warner, D-Va., said at a March Commerce Committee hearing.

"That opens up a whole other can of worms as to who's going to pay for this," declared Rep. Tom Marino, R-Pa., at a House Judiciary subcommittee hearing.

"I knew I'd open up this can of worms," said President Obama during an April speech in San Francisco.

This may be the ultimate worm can. Rarely in Washington has a singular policy decision served as a flashpoint to trigger such a diffuse array of political, diplomatic, national security, legal, legislative, constitutional, moral and ethical issues.

Sen. Mark Kirk, R-Ill., was livid when he exited a secure room in the Capitol complex for a high-level, Senate-wide classified briefing on the exchange Wednesday night. Kirk said the briefers couldn't say if the detainees posed a threat to American security.

"But there will be hell to pay if we find they go on to kill Americans," simmered Kirk.

Senate Majority Whip Dick Durbin, D-Ill., told reporters the Obama administration had "a very hard decision. But Durbin added he would have made the trade.

The "return to the battlefield" looms in this debate.

Opponents of the trade immediately point out a 30 percent recidivism rate for freed Guantanamo Bay detainees. One senior Senate source says that the prisoners' time at Gitmo only hardened them. But skeptics question that belief. They find it doubtful that suspects held for more than a decade at Gitmo are the terrorism equivalents of Max Cady in the movie Cape Fear -- mentally and physically able to instantly morph into their old ways.

There's an axiom in sports that sometimes the best trade is the one you don't make. Teams are sometimes haunted for decades by ill-conceived transactions. Talk to Red Sox fans about dealing Babe Ruth to the New York Yankees. How about the then-New York Nets sending Dr. J. to the Philadelphia 76ers. And look up Dan Norman's career batting average to judge what the New York Mets got in exchange for trading Tom Seaver to the Cincinnati Reds.

A debate percolates about whether Bergdahl was even worth pursuing.

This comes as Bergdahl's hometown of Hailey, Idaho, abruptly nixed potential plans for a celebration to honor his release amid concerns he's a traitor.

"Questions about this particular soldier's conduct are separate from our effort to recover ANY U.S. service member in enemy captivity," declared Joint Chiefs of Staff Chairman Martin Dempsey in a statement. "Like any American, he is innocent until proven guilty."

"Dempsey is the most political chairman of the Joint Chiefs of Staff I have ever seen and that's shameful," blasted McCain.

Some Republicans saw an opening here. A few lawmakers and congressional aides asserted privately the administration was quick to say it goes after all service personnel on the battlefield. They suggested it was an artifice to counter beliefs the U.S. didn't try to rescue those killed in Benghazi. After all, the Benghazi select committee is ramping up and the White House must challenge that narrative.

Lawmakers from both parties erupted in anger that the Obama administration failed to follow the law which required official notification if they planned to execute such a prisoner swap.

"It is very disappointing there was not a level of trust to tell us," chafed Senate Intelligence Committee Chairwoman Dianne Feinstein, D-Calif. In fact, the California Democrat said Deputy National Security Advisor Tony Blinken phoned her Monday night to apologize for not keeping lawmakers in the loop.

Naturally, this plays into the oft-repeated GOP doctrine that lawmakers don't "trust" the Obama administration. Republicans have trotted out that mantra when discussing scandals involving Fast and Furious, the IRS, and lately, reasons against immigration reform.

The White House says President Obama had the right to expeditiously free Bergdahl without congressional intervention through the auspices of a "signing statement." That document is an official declaration codifying how a president intends to execute a given statute. The practice dates back to President Andrew Jackson.

Obama has been parsimonious with his signing statements. In this instance, the president issued a signing statement to a 2014 Defense law requiring the congressional notification. Obama argued "the executive branch must have the flexibility, among other things, to act swiftly in conducting negotiations with foreign countries regarding the circumstance of detainee transfers."

"While the president cannot change the law with a signing statement, given that notice, members of Congress should not be surprised that he acted as he did in the circumstances that existed," said Senate Armed Services Committee Chairman Carl Levin, D-Mich.

This all reinvigorated the debate about what the U.S. is doing in Afghanistan. Republicans openly questioned efforts by the administration to draw down forces. Some Democrats asked why the U.S. was still involved there, nearly 13 years on. Others saw the release of the five prisoners as a way to shutter the controversial detention center.

"Guantanamo has been there far too long and I think we should get [the prisoners] out of there as quickly as we can," said Senate Majority Leader Harry Reid, D-Nev.

"If [President Obama] just tried to empty that jail, people would be calling for his impeachment," said Sen. Lindsey Graham, R-S.C.

In 1998, Graham was a member of the House and served as a "manager" who presented articles of impeachment against President Clinton in the Senate.

Of course, that's yet another can of worms ...