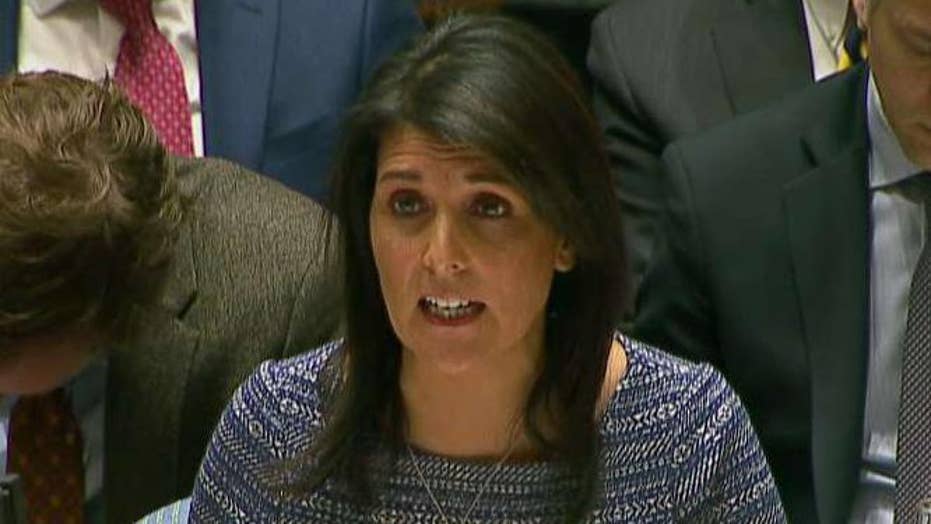 “Russia is not our friend,” Haley said at a dinner at the Greenbrier resort, where the Republicans are holding their annual retreat. “There may be some things we can work with them on, and we should do that where we can. But Russia … will not be our friend as long as their government has the values that it has, and as long as it conducts itself the way it does internationally.”

Haley spoke amid the roughly one-year-long, politically charged Justice Department investigation into whether associates of Trump colluded with Russian operatives during the 2016 presidential race or during the transition period before the administration moved into the White House.

Haley on Thursday evening cited several examples that suggest the administration is tough on Russia — including that it sent weapons to Ukraine, conducted a military strike on Russian allies in Syria and expelled Russian diplomats in the U.S.

“That fact is this: In the last year, this administration has been tougher on Russia than any American administration since Ronald Reagan,” she said to applause. “I have no idea what Russia expected from the American elections. But I have to tell you, they are not happy with what they ended up with.”

Still, the administration recently said it would not impose new, congressional-imposed sanctions on Russia for meddling in the 2016 elections.

California GOP Rep. Ed Royce, in introducing Haley, called her “a rising star” in the Republican Party and a “force” in the United Nations.

Her request echoes Trump saying Tuesday night during his State of the Union address that he wants to restrict billions in U.S. foreign aid to “American friends.”

His request follows the U.N. General Assembly voting last month to rebuke the U.S. for Trump recognizing Jerusalem as the capital of Israel, a decision unanimously endorsed by the Senate.

“This is hugely important,” said Haley to the congressional Republicans, whom she also thanked for their public service. “It’s outrageous to see so many countries who we support go against us at the U.N. In many cases, it’s just that we have not told them we expect them to have our backs at the U.N. That needs to stop. The president and I are now telling all countries we’re watching their votes, and we’re taking names. We need your help to send the same message.”

Haley also suggested that the lawmakers, in this big congressional election year, feel confident that the U.S., under the new administration, is “moving things right along.”

“What a difference a year makes,” said Haley, who touted such first-year successes for the administration as dismantling the Islamic State terror group and enforcing chemical-weapons restrictions in Syria.

She also said in her roughly 20-minute speech that North Korea recently reaching out to South Korea is a promising sign that the regime is feeling the impact of the sanctions imposed on it for pursuing a nuclear weapon.