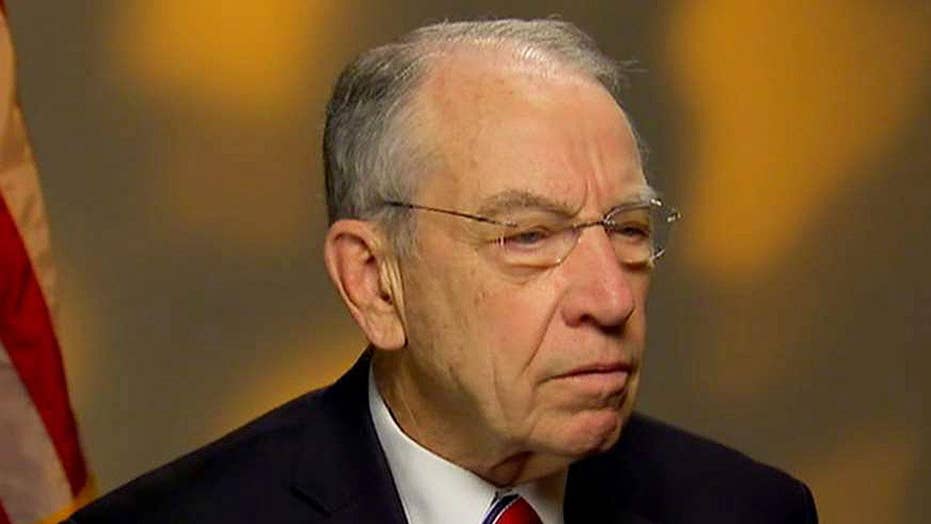 Senator Chuck Grassley discusses a bill that protects the Mueller investigation and other critical issues that face the Senate on 'Justice with Judge Jeanine.'

A key lawmaker has ratcheted up the pressure to obtain video of a deposition Christopher Steele, author of the infamous Trump dossier, gave in a U.K. legal proceeding that could shed light on events that led to the appointment of a special counsel to investigate President Trump.

Steele has yet to tell Congress details about who he was working for and when. For a time, the former spy was a paid FBI "confidential human source" while he was working for Glenn Simpson and the American-based opposition research firm Fusion GPS during the hotly contested 2016 U.S. presidential election.

After a long legal battle, on June 18 in London, as Fox News first reported, the former spy finally sat down for a four-hour deposition in a secret location. Fusion GPS hired Steele with money received from law firm Perkins Coie, which the Democratic National Committee had retained. Currently, Steele's deposition is designated confidential and sealed under the Amended Protective Order in Gubarev's lawsuit. Now, Grassley has written that he wants to see it.

In the letter dated July 25 and written to Gubarev's Boston-based legal team citing Fox News' reporting, Grassley, R-Iowa, wrote that "...Mr. Steele has refused all Congressional attempts to interview him."

It continued, "Accordingly, please produce to the Senate Committee on the Judiciary the transcript and video of Mr. Steele’s deposition, as well as any exhibits used during the deposition and all other discovery materials received from Mr. Steele."

The videotaped deposition of David J. Kramer, confidant of Sen. John McCain, R-Ariz., is sealed as well. Kramer pleaded the fifth before Congress but was deposed in the Gubarev case.

McCain personally had dispatched Kramer to the U.K. to receive a briefing in person by Christopher Steele in 2016. Upon his return, Kramer received a copy of the dossier from Fusion GPS, which McCain gave to the FBI.

In a statement to Fox News, Gubarev attorney Evan Fray-Witzer said his client is happy to work with Grassley, writing: "From the start, Mr. Gubarev has been adamant that he would cooperate with any request for information from the United States Government and so it is our intent to comply with the request from the Senate Judiciary Committee if we're permitted to do so."

INSIDE THE TRUMP DOSSIER HANDOFF: MCCAIN'S 'GO-BETWEEN' SPEAKS OUT

Fray-Witzer continued, "Under the terms of the protective order, however, we were required to notify Mr. Steele's counsel and Mr. Kramer's counsel of the request and give them the opportunity to ask the Court to block the government's request, which we've done. We don't know if they intend to file anything with the Court. If they choose to do so, then we will wait for instructions from the Court on how to proceed."

Fray-Witzer noted to Fox News that Kramer's attorney must be notified about the committee's request for Steele's deposition because "Kramer's testimony was discussed at the Steele Deposition and Kramer's testimony is also subject to confidentiality."

Calls by Fox News to Kramer's Florida-based attorney were not returned.

The Grassley letter specifically noted interest in Steele's role in the dossier and his relationship with the FBI. "The Senate Committee on the Judiciary has been investigating a number of issues connected to Mr. Steele's dossier, including: the FBI's relationship with Mr. Steele relating to his dossier work; the FBI's reliance on Mr. Steele's dossier in applications for surveillance under the Foreign Intelligence Surveillance Act; the FBI's sworn statements to the Foreign Intelligence Surveillance Court (FISC) about Mr. Steele's clients, sources, methods, and credibility; the FBI's sworn statements to the FISC about Mr. Steele's description to the FBI of his interactions with the media; Mr. Steele's post-election dossier work and interactions with the Justice Department; and additional related issues, several of which remain classified."

"This marks the latest example of how the Dodgy Dossier cases continue to play an essential role in restoring the integrity of our justice system. I'm glad Chairman Grassley and other Congressional leaders continue to get the support they need from these alternative sources," former Trump campaign adviser Carter Page responded. Documents showed that the FBI in October 2016 used the dossier in part to obtain a Foreign Intelligence Surveillance Act (FISA) warrant to spy on Page.

Newly released text messages from Steele to then-Associate Deputy Attorney General Bruce Ohr, first reported by The Hill, revealed how Steele was deeply concerned about Grassley's pursuit of his work on the dossier. On March 7, 2017, Steele texted Ohr, "Would it be possible to speak later today please? We’re very concerned by the Grassley letter and it's (sic) possible implications for us, our operations and our sources. We need some reassurance. Many thanks."

Next up for a videotaped deposition in the Gubarev litigation against Buzzfeed and Christopher Steele is Glenn Simpson, co-founder of Fusion GPS.

Fray-Witzer said, "We expect the deposition to take place before the end of the month, as ordered by the Court."