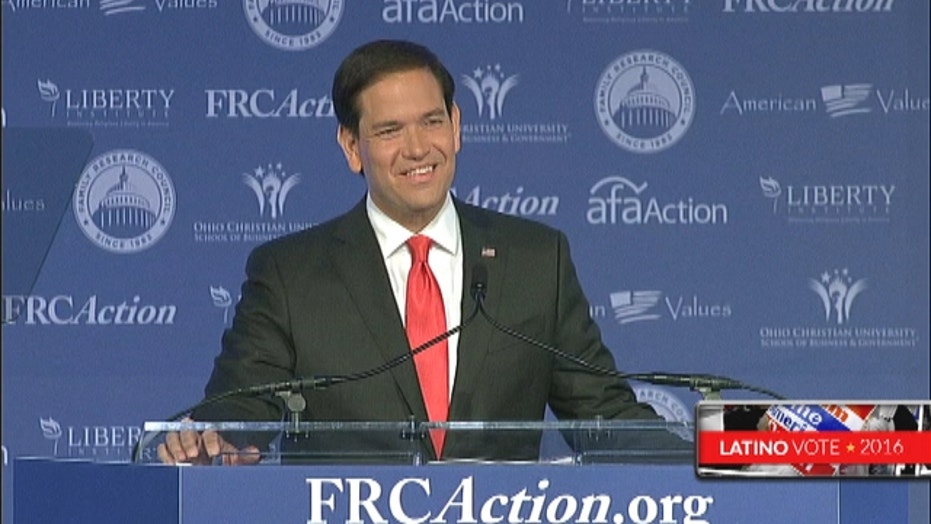 Al Cardenas: Rubio is a pal, but Bush is the one to lead

The conservative kingmaker said it's bittersweet to watch longtime friends Jeb Bush and Marco Rubio compete against each other.

They both are Republicans, from South Florida and share many friends and supporters.

As Sen. Marco Rubio and former Florida Gov. Jeb Bush run for president, one long-time friend and mentor gave insight on how bittersweet it is to watch them compete against each other.

Al Cardenas, a nationally powerful figure in conservative politics, and now a senior advisor in the Bush campaign, has been an important muse to both Rubio and Bush.

“I’m torn emotionally,” said Cardenas, who played a major part in helping the GOP make inroads into Florida’s Cuban community decades ago, and who for years chaired the American Conservative Union, the oldest such advocacy group in the United States. “Who wants to have two people you care about so much get involved in a contest that as time goes on will get more and more competitive?”

While still in law school, Rubio interned for Cardenas, a fellow Cuban-American who already had gained prominence in Miami as a lawyer and a kingmaker in Florida GOP politics. He also, he recalled, gave Rubio his first full-time job out of law school.

Cardenas went to Rubio’s wedding, and pushed for him to be a vice presidential candidate in 2012.


But his ties with the Bush family were also strong, if not stronger.

Cardenas says that he has seen Jeb Bush mature politically since those days.

“I’ve seen his evolution,” said Cardenas, who sometimes becomes visibly sentimental when speaking about the former Florida governor, “his judgment and his wisdom, listening to others, his seeking counsel. He’s just [become] a wiser man. That comes with age and experience.”

Which brings him to Rubio, whom he speaks of with admiration as well, but with candor about how he feels the junior senator has not gone through the learning curve he has witnessed in Bush.

“Marco could well get to where Jeb is today, but he’s not,” Cardenas said.

Of Rubio’s decision to run against Bush, Cardenas said that he was disappointed.

“I was hoping he’d stay in the Senate,” Cardenas said. “He has these special skills sets. He might be the best orator in this whole Republican primary. He’s got these special gifts, and skills sets, of communicating with people, and that is especially significant in the Senate, where you are constantly advocating for a particular bill.”

Cardenas says these things with no trace of anger or resentment but, rather, lament.

“He could be, 20 years from now, one of those icons that forever will be remembered as one of the greatest statesmen in the Senate,” Cardenas said. But for the White House, he said, “he doesn’t have the same skills set as Jeb. He hasn’t gotten to a stage in life where Jeb is.”

In the past, Cardenas has told reporters that Bush was disappointed that Rubio decided to run for president when it was expected that Bush would as well. (Rubio announced his candidacy before Bush.)

“For the first time in our country's history you've got two guys from the same town in the same state from same party running in the same primary," he told the Associated Press in April. “You just don’t want to go to battle against someone you care for.”

But in a recent interview with Fox News Latino, Cardenas said: “Jeb has been quite a gentleman about it. He agrees” with Rubio’s comments on the matter that there should be no “turns” to run for office if someone feels qualified and motivated.

“He agrees with that,” Cardenas said. “[Bush] says [Rubio] has earned the right to run.

Obviously he’s doing fairly well, so that right was well-earned. You can’t deprive someone from seeking the same office as you, even though you’ve been his mentor.”

Cardenas said, however, that many were surprised when Rubio decided to run for president.

“It’s like you’re running against your uncle for president of the company,” Cardenas said. “These are things that are difficult and you both might be suited for the job. But it’s in the family, it’s a clumsy, difficult thing for outsiders to see.”

Rubio knows this well, and in an interview with Fox News Latino he said he considers Bush an important mentor and a friend.

He said that though it makes great headlines and perhaps boosts ratings, it’s not a race between him and Bush.

“He’s still a friend,” Rubio said. “We’re running for the same position, but so are a lot of other people,” Rubio said. “I’m not running against Jeb Bush, I’m running for president. I have tremendous admiration and respect for him personally. He did a great job as governor of Florida.”

But, Rubio says, these times and the presidency call for a change, for new ideas, a new face.
“This is the 21st century, we have to confront the issues of today and now,” Rubio said. “I’m not running against him or, for that matter, any other candidate in the field.”

“We haven’t even begun the journey,” Cardenas said.

Though there are two Latinos in the race – Rubio, of course, and Sen. Ted Cruz, a Texas Republican, Cardenas believes his candidate would best serve the interests of Latinos.

“He’s got executive experience,” he said. “We’d have the first Spanish-speaking president we’ve ever had. They have a beautiful family that speaks the language. In terms of culture, the 50 million-plus Hispanics living here, it’s an opportunity we’ve never had to be as fully recognized as we deserve to be for the contributions we’ve made to America.”