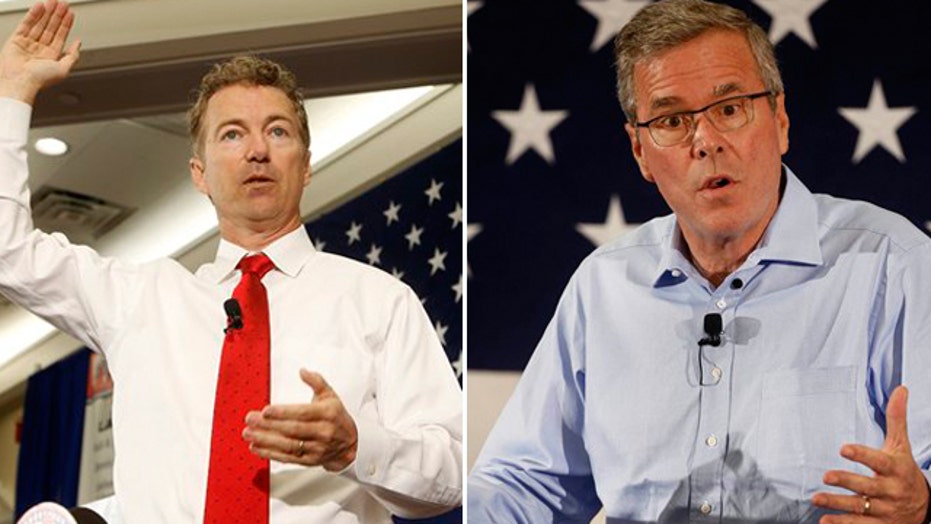 The large field of 2016 GOP presidential hopefuls made their pitches this weekend to potential New Hampshire voters -- with flashes of humor and recollections of humble beginnings mixed in with a lot of policy and politics.

Former Arkansas Gov. Mike Huckabee recalled how his father, who never finished high school, took him as child to see a governor and suggested that might be the only time he’d get that close to one.

"He was one of those guys who lifted things for a living,” said Huckabee, a former presidential candidate who plans to announce a decision May 5 about a 2016 run.

Huckabee, who was Arkansas governor in 1993 after President Bill Clinton -- whose wife, Hillary Clinton, is the 2016 Democratic frontrunner for the White House -- told the audience at the Republican Leadership Summit, in Nashua, N.H., that he has already “survived the Clinton political machine” and would like a chance to try again.

Ohio Gov. John Kasich, who among Republican hopefuls has taken one of the most low-key approaches toward a 2016 candidacy, said on Saturday that he would like Republican voters in New Hampshire to hold off committing to a presidential candidate while he decides whether to become one.

"Think about me, would you?" he asked. "Don't commit too soon. Let us all have a chance to breathe and get out."

"I'm trying to figure out what the Lord wants me to do with my life," he said. "If I feel this is my call, I will come back again and again and again."

The primaries in the early-voting-state of New Hampshire are now about 10 months away.

"I'd say go to China -- go make a deal," Trump said, charging that the Obama administration has been using "babies" in important diplomatic posts.

The crowd loved what Jindal, whose parents are immigrants from India, had to say on the subject. He pointed out that Louisiana policies enacted during his tenure make it easier for children to attend private or charter schools.

He was also critical of the Common Core education standards, adopted by nearly every state and drawing ire from conservative voters across the country.

"We have got to get rid of Common Core," Jindal said. “A lot of politicians say they're against it. I'm actually in federal court right now suing President Obama."

Kentucky Sen. Rand Paul, who attended the event and has declared his 2016 White House candidacy, lashed out Saturday at military hawks in the Republican Party in a clash over foreign policy dividing the packed GOP presidential field.

Paul, who favors a smaller U.S. footprint in the world, said that some of his GOP colleagues would do more harm in international affairs than would Clinton.

"The other Republicans will criticize the president and Hillary Clinton for their foreign policy, but they would just have done the same thing -- just 10 times over," Paul said on the closing day of the conference.

Foreign policy looms large in the presidential race as the U.S. struggles to resolve diplomatic and military conflicts across the globe.

Former Florida Gov. Jeb Bush, whose brother, President George W. Bush, authorized the 2003 invasion of Iraq, declined to say whether he would have done anything different then. Yet he acknowledged a shift in his party against new military action abroad.

"Our enemies need to fear us, a little bit, just enough for them to deter the actions that create insecurity," Bush said earlier in the conference.

South Carolina Sen. Lindsey Graham addressed the question of putting U.S. troops directly in the battle against the Islamic State group militants by saying there is only one way to defeat the militants: "You go over there and you fight them so they don't come here."

Texas Sen. Ted Cruz suggested an aggressive approach as well. "The way to defeat ISIS is a simple and clear military objective," he said. "We will destroy them."

Businesswoman Carly Fiorina offered a similar outlook. "The world is a more dangerous and more tragic place when America is not leading. And America has not led for quite some time," she said.