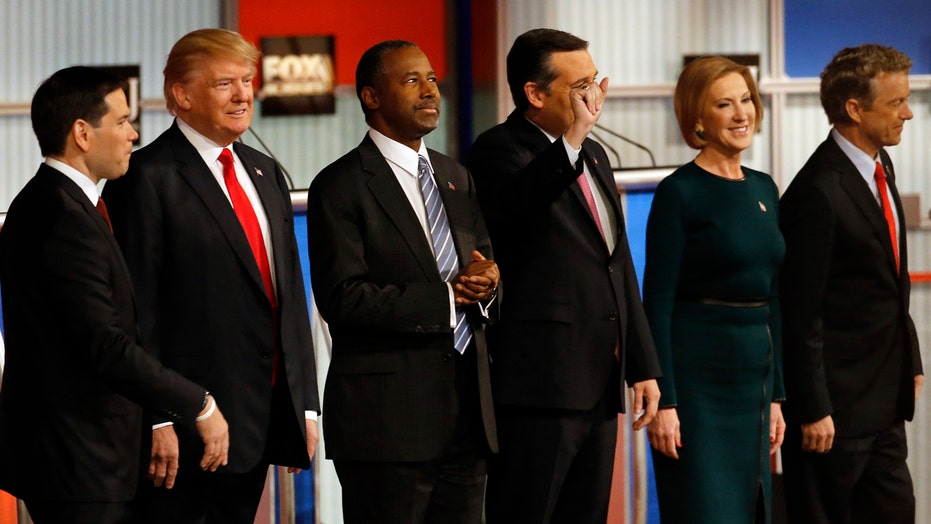 Candidates battle to stand out in fourth Republican debate

The Republican presidential candidates fighting to break out of the middle tier stepped up their game at Tuesday night's prime-time debate, scrapping with their rivals over everything from Donald Trump's deportation plan to the role of the U.S. military.

The Fox Business Network/Wall Street Journal debate -- the fourth on the calendar -- in turn served to expose deep differences within the still-crowded field.

Florida Sen. Marco Rubio, former HP CEO Carly Fiorina and others staked out a no-apologies stance in support of a stronger U.S. military. And they sparred with Kentucky Sen. Rand Paul, who repeatedly argued against military spending and intervention and questioned how Rubio could call himself a conservative while supporting bigger budgets.

"I want a strong national defense, but I don't want us to be bankrupt," Paul said, while Rubio called him a "committed isolationist."

The fireworks in Milwaukee were hardly isolated to the prime-time debate. At the earlier showdown, Louisiana Gov. Bobby Jindal repeatedly questioned New Jersey Gov. Chris Christie's fiscal record in the Garden State -- while Christie, confined to the earlier debate for the first time, fought to show he's presidential material worthy of the upper primary tier. Christie kept his focus squarely on Democratic front-runner Hillary Clinton as the "real adversary" throughout.

The two debates showed the middle- and lower-tier candidates refusing to cede ground in the race, even as Trump and Ben Carson dominate in the polls. If anything, Trump and Carson took a step back Tuesday night as the other candidates duked it out.

During the prime-time debate, even Jeb Bush, who has struggled for airtime during past face-offs, was able to elbow his way into the fray, taking shots at President Obama's economic record and Trump's immigration plan.

"They're doing high fives in the Clinton campaign right now when they hear this," Bush said, of Trump's call to deport millions.

That plan was another flashpoint at the debate.

As he has at past debates, the billionaire businessman repeated his plan to build a U.S.-Mexico border wall. And when asked whether he'd deport the millions in the country illegally, he said, "We have no choice."

The comment quickly drew in Ohio Gov. John Kasich, who said, "Think about the families."

He said illegal immigrants should pay a penalty, but called Trump's plan a "silly argument" and "not an adult argument."

After Kasich continued to slam the plan, Trump cited his own business record and said: "I don't have to hear from his man."

But Bush backed up Kasich and said Trump's plan would "tear communities apart."

Texas Sen. Ted Cruz, though, sided with Trump. He said Democrats indeed are laughing, "Because if Republicans join Democrats as the party of amnesty, we will lose."

A sprawling argument over the size and purpose of the U.S. military developed later on in the night.

Paul held his ground in vociferously calling for reining in the military budget. This snowballed into a heated debate over Russia's mounting intervention in the Middle East.

When Trump suggested the U.S. cannot be the world's policeman, Bush said "he is absolutely wrong on this" and the U.S. needs to be the "world's leader."

Fiorina said both Trump and Paul should know that "we should not speak to people from a position of weakness."

The U.S. needs to have the "strongest military on the planet and everyone has to know it," she said.

"You can be strong without being involved in every civil war in the world," said Paul, not backing down.

When Fiorina tried to interject, Trump scolded her -- saying, "Why does she keep interrupting everybody?" -- but was booed by the audience.

The debate was the fourth for the GOP field and the last debate until mid-December, putting pressure on the candidates to seek a breakout moment before the holiday lull.

Unlike the most recent debate, where candidates sparred frequently with the moderators, the candidates on Tuesday mostly stuck to policy issues. The same was true at the evening debate, where Jindal repeatedly touted his own record cutting spending while challenging executives like Christie and former Arkansas Gov. Mike Huckabee.

"There are a lot of politicians that talk about cutting government spending, I'm the only one that's actually done it that's running for president," Jindal said.

Former Pennsylvania Sen. Rick Santorum pointed to his own record in Congress, saying "I have a record of accomplishment of being a conservative on everything."

The debates otherwise focused in large part on economic and fiscal issues, and the candidates used the opportunity to flag big government as a central problem holding the economy back.

Bush called for repealing "every rule" the administration has in progress.

Cruz said "the Obama economy is a disaster" but the economy could improve with tax and regulatory reform.

At the opening of the debate, the two front-running Republican candidates, Trump and Carson, also said they would not raise the minimum wage, warning that would hurt the economy in the long run.

Carson, for his part, has spent the last several days sparring with the media and his rivals over reports questioning his personal story. At the debate, he was asked about some of that coverage.