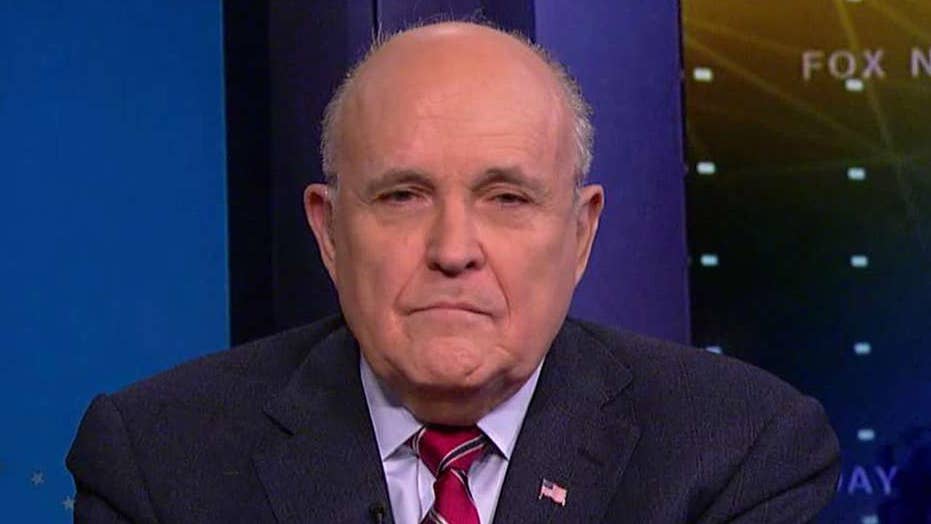 In a spirited back-and-forth with host Chris Wallace, Giuliani also reiterated his claim that Trump initially "didn't know about" the hush-money payments made to two women by former Trump attorney Michael Cohen that prosecutors have alleged constituted campaign finance violations.

Giuliani said Trump eventually found out about the payments and reimbursed Cohen, adding that Cohen is a "complete, pathological liar" who defied basic principles of ethics by secretly tape-recording his own client for several hours.

"Yes, this man is lying -- is that a surprise to you, that Michael Cohen is lying?" Giuliani asked. "The man got up in front of a judge and said, 'I was fiercely loyal to Donald Trump.' Nonsense. He wasn't fiercely loyal to him, he taped him. He sat there with [CNN anchor] Chris Cuomo, told him he wasn’t being taped, showed him a drawer and he lied to him and taped him for two hours."

Playboy model Karen McDougal, left, sued to be released from a 2016 agreement requiring her to keep quiet about an alleged tryst she claims she had with Donald Trump, as Stormy Daniels said she passed a 2011 polygraph test.

"There was an intervening conversation" after the payment took place and before the Air Force One comments, Giuliani said, that led to Trump reimbursing Cohen's payment. The reimbursement could be legally significant because, while third parties like Cohen are limited in the amount they can contribute to a presidential candidate, candidates themselves have no such spending limit.

Top Democrats, including incoming House Judiciary Committee Chairman Jerry Nadler, D-N.Y., have said any campaign finance violation by Trump "certainly" could be impeachable. But they have so far cautioned against pursuing impeachment based on campaign finance concerns alone, as top legal experts and a former Federal Election Commission chairman have said that obtaining a criminal conviction for such alleged violations is often extremely difficult.

While Cohen has pleaded guilty to violating campaign finance laws "at the direction of" Trump, he also pleaded guilty to a smattering of unrelated fraud and false statemens charges -- and Trump has suggested his former attorney was simply seeking a lenient sentence. Last week, a tearful Cohen who lamented covering up what he characterized as Trump's "dirty deeds" was sentenced to 36 months in prison.

Giuliani also suggested to Wallace that Trump had difficulty remembering the 2016 conversation while aboard Air Force One.

"That was a conversation he was asked, middle of the campaign -- he's working 18 hours a day. I wouldn't be able to remember a lot of things that happened in September of 2016. ... When he sat down with his lawyer, and went through it in great detail, and saw things that could refresh his recollection, we immediately corrected it. Nobody pushed us."

Trump tweeted Sunday morning that Cohen "only became a 'Rat'" after the FBI raided his office in April. "Why didn't they break into the DNC to get the Server, or Crooked's office?" Trump asked, in an apparent reference to former Secretary of State Hillary Clinton.

Asked whether Trump -- who has already provided written responses to inquiries from the special counsel -- would meet with Mueller, Giuliani responded, "Yeah, good luck, good luck -- after what they did to Flynn, the way they trapped him into perjury, and no sentence for him." (Mueller has recommended Flynn receive no jail time, and Flynn is set to be sentenced Dec. 18.)

Alan Dershowitz on the FBI's treatment of Michael Flynn

Flynn pleaded guilty this year to making false statements to FBI agents who broke the agency's usual protocol by interviewing him at the White House without involving the White House Counsel's office.

Flynn has since said in a bombshell court filing that top FBI brass pressured him not to bring a lawyer to the interview, which prompted the federal judge overseeing the case to demand all relevant documents from Mueller's team for review. It remains technically possible for the judge to overturn Flynn's guilty plea if he finds that it was coerced, or would represent a miscarriage of justice.

The agents who interviewed Flynn at the White House in January 2017 -- including Strzok -- said they did not initially think Flynn was lying.

The documents released by the Mueller team on Friday in response to the judge's order reveal that the decision to interview Flynn about his contacts with the Russian ambassador was controversial within the Justice Department. One FBI document said then-Acting Attorney General Sally Yates “was not happy” when then-FBI Director James Comey informed her that the FBI planned to talk to Flynn.

While many sections of Mueller's Friday filing are redacted, prosecutors apparently did not provide a so-called "302" witness report that FBI policy dictates should have been written contemporaneously with the Flynn interview. Instead, they provided a 302 report of an interview with Strzok months later on unrelated matters, in which Strzok also discussed his interview with Flynn and said he appeared to be telling the truth.

Strzok was removed from the Mueller probe for anti-Trump bias in late July 2017, after text messages surfaced in which he bashed the president and apparently coordinated media leaks detrimental to the White House.

Giuliani told Wallace that "the president doesn’t know that [Flynn] lied" to FBI agents, pointing out that there is no public evidence -- other than Flynn's guilty plea -- that he committed the crime. Flynn, under significant financial pressure as a result of the prosecution, sold his home in Virginia this year.

On Sunday, GOP Rep. Devin Nunes told Fox News' "Sunday Morning Futures" that Flynn had likely only pleaded guilty because of that overwhelming financial pressure and because "he was just out of money."

While Trump did tweet early last year that Flynn had lied to the FBI, Giuliani said the president was simply using publicly available information to come to that conclusion. "He knows what he reads," Giuliani said, referring to Trump.

"What they did to General Flynn should result in discipline," Giuliani continued. "They’re the ones who are violating the law. They’re looking at a non-crime: collusion. The other guys are looking at a non-crime: campaign violation, which are not violations, and they are the ones who are violating the law, the rules, the ethics, nobody wants to look at them. They destroyed Strzok and Page's 19,000 texts. If he destroyed texts, they would put him in jail, even though they can’t because he’s the president."

Giuliani acknowledged that Flynn had misled Vice President Pence regarding his conversations with the then-Russian ambassador, admitting "that was a lie, but that’s not a crime."

Is America safer with George Papadopoulos in prison?

Simona Papadopoulos weighs in on the accusations against her husband on 'Tucker Carlson Tonight.'

Giuliani, the former U.S. Attorney in the Southern District of New York, derided Mueller's efforts in another false statements prosecution in the Russia probe.  George Papadopoulos, recently released from prison after pleading guilty to making false statements to FBI agents, said Friday he plans to run for a seat in the House of Representatives.

"Fourteen days for [former Trump aide George] Papadopoulos -- I did better on traffic violations than they did with Papadopoulos," Giuliani said.

He then pointed to a report by the Department of Justice's internal watchdog last week, which blamed a technical glitch for a swath of missing text messages between anti-Trump ex-FBI officials Peter Strzok and Lisa Page -- and revealed that government phones issued by Mueller's office to Strzok and Page had been wiped clean after Strzok was fired from the Russia probe.

Giuliani linked the Cohen prosecutions for campaign finance violations to the Mueller probe, saying Deputy Attorney General Rod Rosenstein -- a frequent target of several conservatives in Congress, who sought to impeach him this summer -- is overseeing both probes.

Mueller referred the Cohen campaign finance case to Southern District of New  York prosecutors because it fell outside the ambit of his mandate to probe Russian collusion. Cohen has also pleaded guilty in a separate case brought by Mueller's team on a charge that Cohen lied to Congress by claiming that work on a since-abandoned plan to build a Trump Tower in Moscow had stopped in early mid-2016, when it really continued for months afterwards.

Multiple reports and indications suggest that the Mueller probe is winding down. Speaking to ABC's "This Week," Sen. Dick Durbin, D-Ill., said the end result should be as transparent as possible.

"When Mueller's investigation is complete, whenever that may be, it should be disclosed to the American public," Durbin said. "They ought to see it in detail, understand everything that has transpired."

Responding to Giuliani's claims that hush-money payments would not be criminal, Durbin effectively told all parties to wait and see.

"I think the responsibility of Congress is very clear: park yourselves on the sidelines and let Mueller complete this investigation," Durbin said.

Meanwhile, former FBI Director James Comey acknowledged last week that when the agency initiated its counterintelligence probe into possible collusion between Trump campaign officials and the Russian government in July 2016, investigators "didn't know whether we had anything" and that "in fact, when I was fired as director [in May 2017], I still didn't know whether there was anything to it."

His remarks square with testimony this summer from Page, the former FBI lawyer whose anti-Trump texts became a focus of House GOP oversight efforts. Page told Congress in a closed-door deposition that "even as far as May 2017" -- more than nine months after the counterintelligence probe commenced -- "we still couldn't answer the question" as to whether Trump staff had improperly colluded with Russia.