Republican Gov. Brian Kemp of Georgia says he opposes changing the name of the Atlanta Braves

Republican Gov. Brian Kemp of Georgia says he opposes changing the name of the Atlanta Braves. Kemp made his comments in an interview with Fox News Digital's Paul Steinhauser during a stop in Alpharetta, Georgia on Sept. 27, 2022

"The Braves are the Braves. They need to keep chopping," Kemp emphasized on Tuesday when asked if Major League Baseball’s World Series champions should change their name as part of the ongoing argument over the longtime use of Native American names in professional and collegiate sports.

Kemp was questioned during a Fox News Digital interview ahead of a gubernatorial re-election rally in Alpharetta, Georgia with GOP Gov. Glenn Youngkin of Virginia.

The Braves’ name and the team’s accompanying tomahawk logo have long come under criticism as offensive to Native Americans. For decades during baseball games, Braves fans have performed a tomahawk chop with their arms while chanting a battle cry.

The controversy was back in the national spotlight on Monday, as the world champions visited with President Biden at the White House. While President Biden made no mention of the controversy as he greeted the Braves, White House press secretary Karine Jean-Pierre told reporters "we believe it’s important to have this conversation. Native American and Indigenous voices, they should be at the center of the conversation."

Kemp took aim at the Biden administration, charging that "for them [the Braves] to be celebrated at the White House yesterday and then the president’s administration talk about changing the name is ridiculous. The Braves have a great rapport with the Native Indian community in the state. They’ve actually been in the governor’s office. We’ve met with them before….we don’t need the cancel culture that this White House has had."

The governor also criticized Democratic challenger Stacey Abrams over the controversy, claiming that "they're eally just trying to mislead and divide people up in Washington unfortunately and my opponent Stacey Abrams has been right there with them, even though she won’t take a position on what the Braves’ name should be. But I will. I think it should be the Braves. Let’s go Braves. Keep chopping. Let’s get two in a row."

Asked for a response, Abrams campaign spokesperson Alex Floyd told Fox News that "Abrams is thrilled to cheer on the Braves and is rooting for the team’s success as they work to bring home another title to Georgia. Unfortunately, it’s become clear that rather than just cheering on the Braves, Republicans are engaging in bad faith attacks to distract from the fact they haven’t brought down health care costs, fully funded public education, or provided immediate tax cuts for hardworking families. Stacey Abrams will go to bat for all Georgians — on and off the field."

Abrams, a former state Democratic legislative leader and voting rights champion who’s a Democratic Party rising star, narrowly lost to Kemp in the 2018 gubernatorial election. While Abrams enjoys a large fundraising lead over Kemp with six weeks to go until the November election, the governor holds a 6.6-point lead over the Democratic nominee in an average of the most recent public opinion polls that was compiled by Real Clear Politics.

THESE 11 SENATE RACES WILL DETERMINE THE CHAMBER'S MAJORITY

Asked if it was a more comfortable rematch, Kemp told Fox News, "It’s not any more comfortable to me. I can assure you. Stacey Abrams is getting 86% of her money from outside the state….We are in the fight for our life here, especially financially. She has every financial resource she could get. You could not underestimate what she’s doing on the ground. Some polls, we’re in good shape. Others show the race very tight. I expect it to be tight. I’m running like I’m ten points behind."

"I’m also running on a great record," the incumbent touted. "I think there’s a lot of difference in this campaign than in ’18. Georgians know me. They know what I told them I would do. And I’ve done just that. Even if they don’t like it, they know I’ve fulfilled the promises that I’ve made, and a lot of people appreciate that." 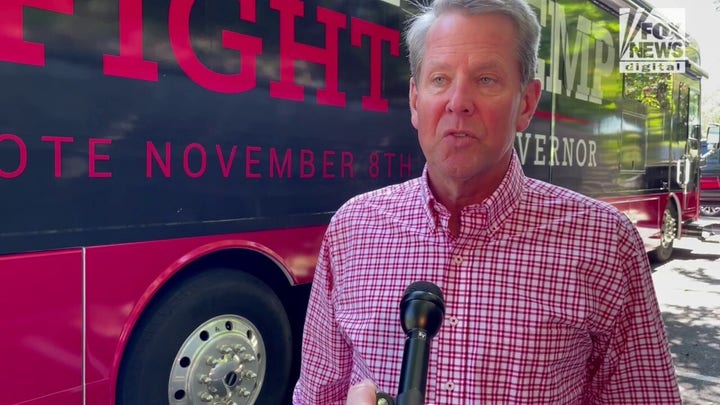 A few minutes later, Youngkin urged the crowd at the rally to give Kemp "four more years."

Comparing Kemp to Abrams, Youngkin argued that "this one seems pretty clear to me, that you all have to re-elect Brian Kemp."

As the popular first-term GOP governor of Virginia who was elected less than a year ago crisscrosses the country, campaigning on behalf of fellow Republicans running in competitive gubernatorial elections in November, speculation rises regarding Youngkin’s potential national ambitions in 2024.

Youngkin emphasized in an interview with Fox News last month during a campaign stop in Maine that "we'll have to see how things pan out" as he reiterated that he’s "incredibly flattered by this discussion" and "the fact that my name is in the national mix is pretty overwhelming."

On Tuesday, asked by Fox News about whether the 2024 speculation is distracting, Youngkin said, "No, because I don’t really think about it honestly."

And he repeated that his focus is squarely on the 2022 elections and his job as Virginia governor.