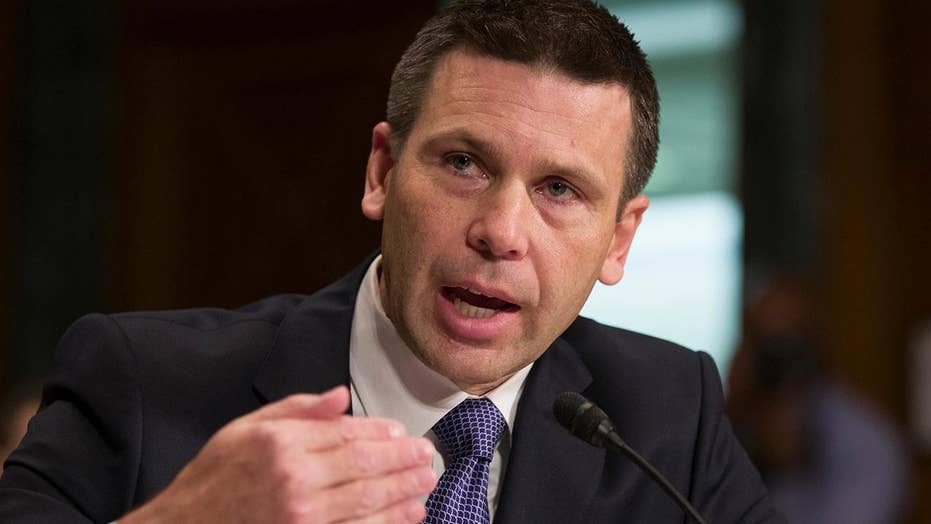 What can Kevin McAleenan accomplish at DHS that Kirstjen Nielsen could not?

Former acting director of Immigration and Customs Enforcement (ICE) Tom Homan, a Fox News contributor, said he believes U.S. Customs and Border Protection (CBP) Commissioner Kevin McAleenan will use his experience on the ground to make progress on border security in his new role.

Homan, who served as acting ICE director under President Donald Trump from 2017-2018, calls the acting Homeland Security Secretary a friend and the right man for the job.

“He’s a really smart guy, he has great relationships with the government of Mexico, he has been working steadily on getting them to cooperate more. Kevin’s been the tip of the spear on wall construction,” said Homan on "America’s Newsroom" Monday. Homan said he has worked with McAleenan for the past decade.

He added that he respects Secretary Kirstjen Nielsen for stepping up to the “most difficult job,” especially when Congress didn’t help.

President Trump revealed in a tweet Sunday that McAleenan will become the acting head of Homeland Security, a sprawling department of 240,000 people, following the resignation of Secretary Nielsen.

CONSERVATIVE COLUMNIST REACTS TO NIELSEN'S RESIGNATION: 'THERE IS A GENUINE, ACTUAL CRISIS AT THE BORDER'

When asked what McAleenan could do in the role that Nielsen could not, Homan said, “He spent many years fighting the fight so I think he knows the ground. He knows how it operates on the ground. Kirstjen Nielsen was very talented but she didn’t come up through the ranks. Kevin is within the ranks.”

He added, “I think Kevin can do operationally what he’s done in the lower ranks. I think he can certainly step up enforcement on the border.”

McAleenan is also getting support on Capitol Hill from some including Rep. John Joyce, who sits on the House Homeland Security Committee.

“Kevin McAleenan brings a lot to the table from his background in customs. He’s already stated that we’re at a breaking point. He realizes the serious issues that are occurring at the southern border,” said Joyce.

Administration sources tell Fox News that McAleenan needs to be able to handle the politics involved and change minds on Capitol Hill before he could be seen as potentially taking the job of DHS secretary permanently.