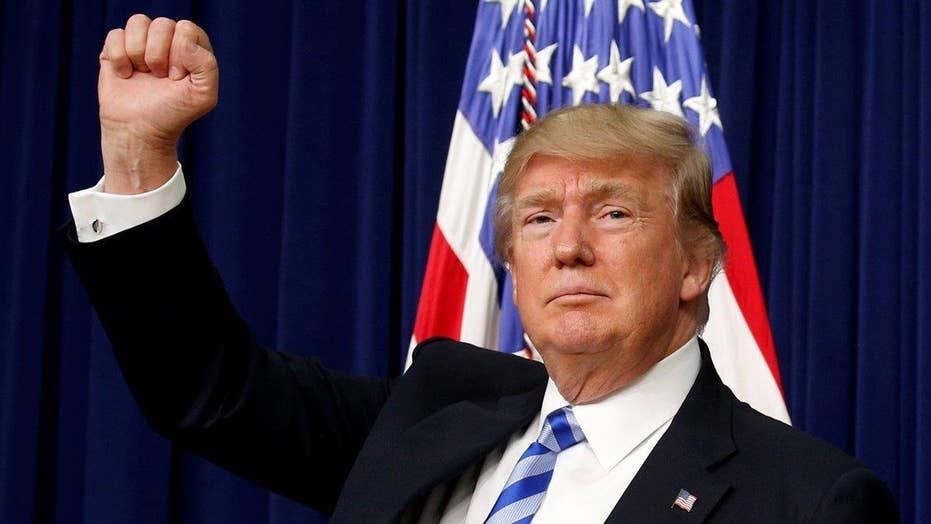 Though President Trump is unlikely to ding ObamaCare before the 100-day mark this Saturday, he and GOP lawmakers have been able to chip away at Barack Obama's legacy in other ways -- by making unprecedented use of an obscure rule-killing law.

Under the Congressional Review Act, Republicans wiped out a wave of last-minute regulations pushed through before Trump took office. The result: the Obama administration's final days were treated like a dry-erase board.

The Trump White House and its allies are now touting the legislative victories in the run-up to Saturday -- 13 times, Trump joined with the Republican-controlled Congress to undo rules issued under his predecessor.

“You see that this president has done a lot in 100 days,” counselor Kellyanne Conway told "Fox & Friends" on Tuesday, specifically citing these cases. “Twelve or 13 roll-backs of Congressional Review Acts … We are going to keep plowing ahead.”

The Congressional Review Act was first passed in 1996 as part of then-Speaker Newt Gingrich’s “Contract with America.” Before CRAs, if one house of Congress voted to overturn a regulation, it became invalidated. However, in 1983, the U.S. Supreme Court ruled the process unconstitutional and CRAs emerged as a quick way for Congress to overturn recent rules.

Prior to the Trump White House, the CRA had been used only once to overturn a rule. In that case, President George W. Bush overturned an Occupational Safety and Health Administration rule that addressed ergonomic injuries in the workplace.

Republicans still have until early May to eliminate Obama-era rules finalized after June and only need simple majorities in both houses to do it.

The CRA so far has been used to nix everything from a rule that would have required oil and gas companies to report payments to foreign governments to a gun safety regulation Obama proposed following the massacre at Sandy Hook Elementary School. That rule was meant to prevent thousands with mental disorders from purchasing a gun, though the NRA said it went too far. The rule was pushed after Adam Lanza killed 20 children and six adults in Newtown, Conn.

The aggressive use of the CRA by the Trump administration gives the White House and Republicans several small-scale legislative victories to tout despite falling short of pushing through an ObamaCare repeal or other major legislation as the president nears the 100-day mark.

White House Director of Legislative Affairs Marc Short recently told reporters, “There are several more that we hope to sign before this window closes on April 28.”

In a statement touting these actions on Tuesday, the White House called the nixed rules "unnecessary."

Other CRA-tied action includes a February measure to overturn a stream protection rule from the Department of Interior that would have restricted what mountaintop mining firms could dump into nearby waterways.

On March 31, Trump overturned a Labor Department rule that limited how many unemployment applicants states can subject to drug testing. An April 3 measure eliminates worker safety regulations aimed to track and reduce workplace injuries and deaths.

Most recently on April 13, Trump nullified a Department of Health and Human Services rule that allowed states to withhold federal family planning dollars from clinics that provide abortion services.

As with most actions under the Trump administration, these were not without controversy.

The Center for American Progress contends that Trump’s use of the CRA does little for the average American.

“All told, Trump’s legislation will provide businesses with more than $7 billion dollars in giveaways over the next decade while causing a net loss in jobs, millions in reduced wages, and the elimination of important consumer protections,” Sam Berger, an author at the liberal-leaning think tank, said.