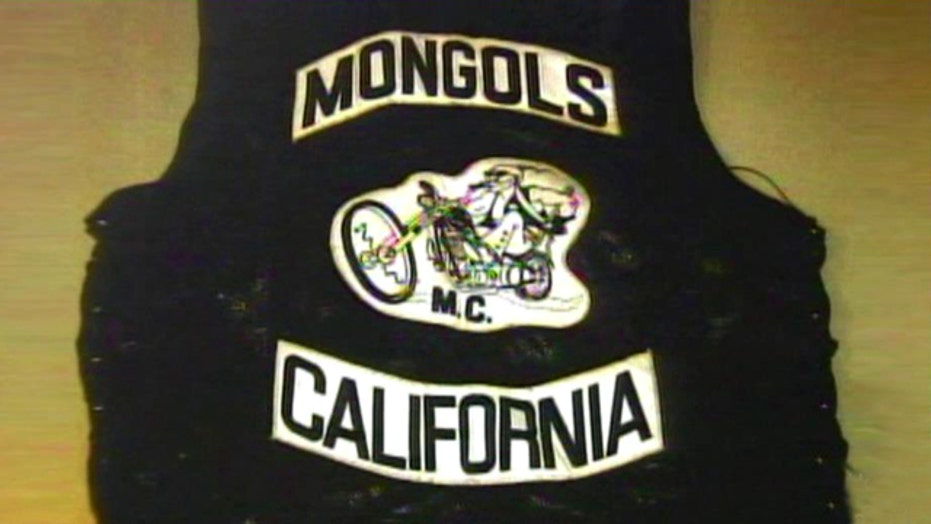 The trademarked logo of Southern California's largest motorcycle gang is unmistakable: a black-and-white image of 12th Century conqueror Genghis Khan, wearing sunglasses and bell bottoms riding a chopper while carrying a sword. For the club's 600 fully patched members, the logo is part of their identity and motto: "Mongols Forever, Forever Mongols."

But today, the Mongols Nation trademark is the focus of U.S. prosecutors' effort to dismantle America's most violent motorcycle gangs, from the Mongols to those who shot up a Waco, Texas restaurant over the weekend.

The Department of Justice considers the clubs a criminal enterprise and is asking a federal judge to make it illegal for Mongols members to wear the patch or even display the name -- allowing cops to literally take a Mongols jacket right off a biker's back.

"It not just stripping them of their identity, or robbing them of a recruiting tool, it's taking the star off their helmet," said a law enforcement source in Los Angeles. "The logo itself furthers a criminal enterprise."

The Mongol Nation registered their trademark in 2005 with the U.S. Patent and Trademark Office. Unknown to the club at the time, four undercover agents with the Bureau of Alcohol, Tobacco and Firearms had infiltrated the gang.

In 2008, the ATF issued 110 arrest warrants in four states, accusing club members of murder, drug trafficking, robbery, extortion and money laundering. As part of a plea deal, the club president forfeited rights to the Mongol trademark to the Department of Justice, and a federal judge granted an injunction prohibiting club members from wearing, licensing, selling, or distributing the any materials depicting the Mongolian warrior.

At the time, only Uncle Sam was legally entitled to wear the Mongols' leather vest -- known as a "cut" -- as a jacket without sleeves.

Federal Judge Florence-Marie Cooper ruled that upon presentation of the court's order by police, "defendants and all their agents, servants, employees, family members, and other persons in active participation with them, must surrender all products, clothing, vehicles, motorcycles, books, posters, merchandise, stationery, or other materials bearing the Mongols trademark."

While another judge partially lifted that injunction a few years later, Uncle Sam and the Mongol Nation are headed back to federal court June 2 in Los Angeles to reargue the case and determine who now owns the trademark.

The Mongols mount a First Amendment defense, arguing in court papers the "government's sole purpose in filing the indictment is to crush the Mongols Nation Motorcycle Club by seizing the intellectual rights to the 'Rider' and 'Mongol' marks and thereby quash the Club and its members rights to freedom of expression and association."

Davis said "all other clubs" see this as "just a first step to what the government wants to do to all motorcycle clubs. They wanna outlaw motorcycle clubs by taking their insignia away from them."

To Davis, the DOJ actions are "unprecedented and unconstitutional." He said the Mongol's insignia is a "collective membership mark" that's "on a par with the Christian cross, the Masonic compass, or the Jewish star."

The federal Racketeering Influenced and Corrupt Organization Act (RICO) allows the government to seize cars, houses, boats and any assets used to further illegal activity. In the Mongols case, that includes their logo. If prosecutors prevail, the "Mongols" name and image will belong solely to Uncle Sam. Violating such a trademark would be considered a civil violation.

After the Mongols, sources say prosecutors would hope to use the same technique against other "OMG's" -- outlaw motorcycle gangs like the Hells Angels, the Outlaws in the Midwest, the Pagans in the East, the Bandidos in Texas and others.