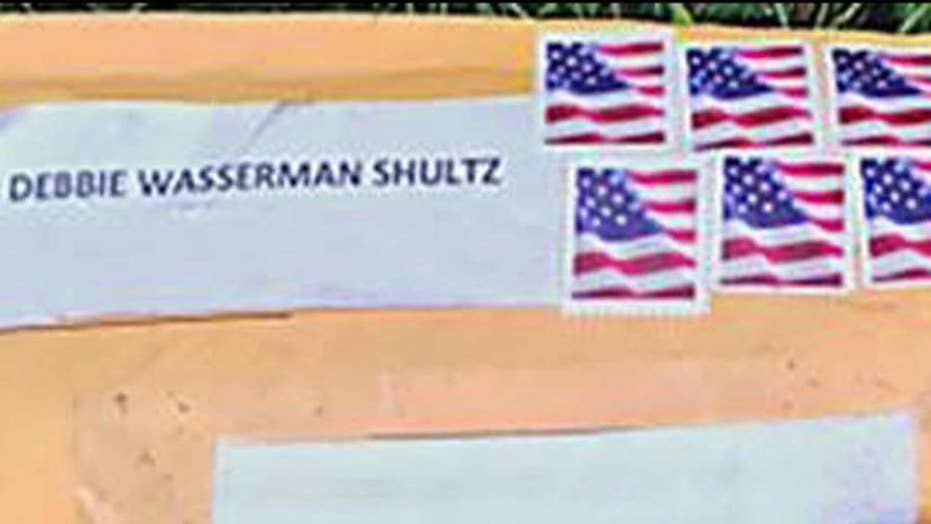 Suspicious packages being sent to FBI lab for analysis

The FBI said Wednesday evening that it had identified seven suspicious packages addressed to prominent liberal and Democratic political figures over the previous three days that contained "potentially destructive devices."

The bureau initially said it had recovered five packages that were similar in appearance and bore the return address of an office for Rep. Debbie Wasserman Schultz, D-Fla. The packages were addressed to billionaire George Soros, Hillary Clinton, former President Barack Obama, former CIA Director John Brennan -- care of CNN -- and former Attorney General Eric Holder. The FBI said it was possible that additional packages were mailed to other locations.

"This investigation is of the highest priority for the FBI," Director Christopher Wray said in a statement. "We have committed the full strength of the FBI’s resources and, together with our partners on our Joint Terrorism Task Forces, we will continue to work to identify and arrest whoever is responsible for sending these packages. We ask anyone who may have information to contact the FBI. Do not hesitate to call; no piece of information is too small to help us in this investigation."

Law enforcement officials involved in the investigation have told Fox News that the similarity between the packages has led them to believe that a single individual or group could be responsible.

In addition to the five packages identified by the FBI, U.S. Capitol Police were investigating a suspicious package addressed to Rep. Maxine Waters, D-Calif., at the Capitol Hill screening facility in Maryland. Waters said in a statement that Capitol Police had told her that her Washington, D.C. office "was the target of a suspicious package that has been referred to the FBI."

Late Wednesday, the Los Angeles Central Mail facility was evacuated after employees found a suspicious package, which The Associated Press reported was addressed to Waters. The FBI later confirmed that it had recovered two packages addressed to Waters that were similar to the five it referenced in its earlier statement. The Los Angeles Police Department tweeted that its bomb squad had rendered the package at the mail facility safe and the investigation would be turned over to the FBI.

The FBI statement came hours after the package addressed to Brennan, an NBC News analyst, arrived at CNN's New York City headquarters, forcing an evacuation of the Time Warner Center in midtown Manhattan. New York Police Department Commissioner James O'Neill said officers on the scene identified what "appeared to be a live explosive device" as well as an envelope containing "some kind" of white powder, which is now being investigated.

New York City Mayor Bill de Blasio said the package was "an effort to terrorize" and said the incident "clearly is an act of terror."

The package addressed to Holder did not reach its intended address, but was returned to the Wasserman Schultz office building in Sunrise, Fla., prompting the building northwest of Miami to be evacuated. Wasserman Schultz, the former chair of the Democratic National Committee, said in a statement that a second office building in nearby Aventura, Fla., was evacuated "in an abundance of caution." Aventura Police later said a suspicious package at that location had been examined and determined to be safe.

"We will not be intimidated by this attempted act of violence," Wasserman Schultz said. "This appalling attack on our democracy must be vigorously prosecuted, and I am deeply disturbed by the way my name was used. Today, my staff and I will hug each other and our loved ones tightly, and tomorrow get back to work serving the people I was elected to represent."

Earlier Wednesday, the Secret Service confirmed that it had "intercepted" two suspicious packages identified as "potential explosive devices" that were sent to Obama's Washington, D.C. home and Clinton's residence in Chappaqua, N.Y. Sources told Fox News that former President Bill Clinton was at the Chappaqua home when the suspicious package was found, but that it was screened in Westchester County -- not at the Clinton residence.

Hillary Clinton was attending campaign events for Democrats in Florida on Tuesday and Wednesday and was not at the home at the time.

A similar device was found in the mailbox of Soros' estate in Bedford, N.Y., Monday evening.

JUDGE NAP ON SUSPICIOUS PACKAGES: 'DEALING WITH A MADMAN'

The alerts also gave rise to a series of false alarms Wednesday. In San Diego, the building housing the offices of Sen. Kamala Harris, D-Calif., and the San Diego Union-Tribune was evacuated due to a suspicious package. But police later said the package was merely "abandoned property," and a Harris spokeswoman said the "suspicious packages" were not addressed to the senator or their office.

New York Gov. Andrew Cuomo also announced at a press conference that a "device" was sent to his Manhattan office. But a spokesperson for the governor later walked back that statement, saying that a "preliminary investigation" showed that the package contained "computer files" on the white nationalist group The Proud Boys.

Cuomo later announced that he was deploying 100 additional state National Guard soldiers and directing state police to double security at key bridges and tunnels across New York state, as well as at JFK and LaGuardia airports and mass transit systems, "out of an abundance of caution."

"New Yorkers have never succumbed to fear or intimidation, and today will be no different," Cuomo said. "We are tough, we are resilient and we will not allow terrorist thugs to change the way we lead our lives. We will not let terrorism win — not today, not ever."

President Trump condemned the threatening mailings Wednesday afternoon, saying that "acts or threats of political violence of any kind have no place in the United States of America." He was joined by Vice President Mike Pence, who tweeted: "These cowardly actions are despicable & have no place in this Country." White House Press Secretary Sarah Sanders added: "These terrorizing acts are despicable, and anyone responsible will be held accountable to the fullest extent of the law."

"Time and time again, the President has condoned physical violence and divided Americans with his words and his actions," Pelosi and Schumer added, referencing Trump "expressing support for the Congressman [Greg Gianforte] who body-slammed a reporter, the neo-Nazis who killed a young woman in Charlottesville, his supporters at rallies who get violent with protestors, dictators around the world who murder their own citizens, and referring to the free press as the enemy of the people."

At an event in Austin, Texas Wednesday night, Brennan praised Trump for condemning the mailings but added that "I sincerely wish, that Donald Trump ... would have said these things previously and regularly."

Unfortunately, I think Donald Trump too often has helped to incite some of these feelings of anger, if not violence, when he points to acts of violence or also talks about swinging at somebody from the press or the media," Brennan went on. "So, I’m hoping this is going to make clear to him that what he has done heretofore as far as a lot of this rhetoric really is counterproductive. It is un-American. It is what a president should not be doing.

"What he said today is what the president should be doing, but [he should] follow up on those words with actions and with his future comments," the former CIA director said. "I'm hoping that maybe this is a turning point."