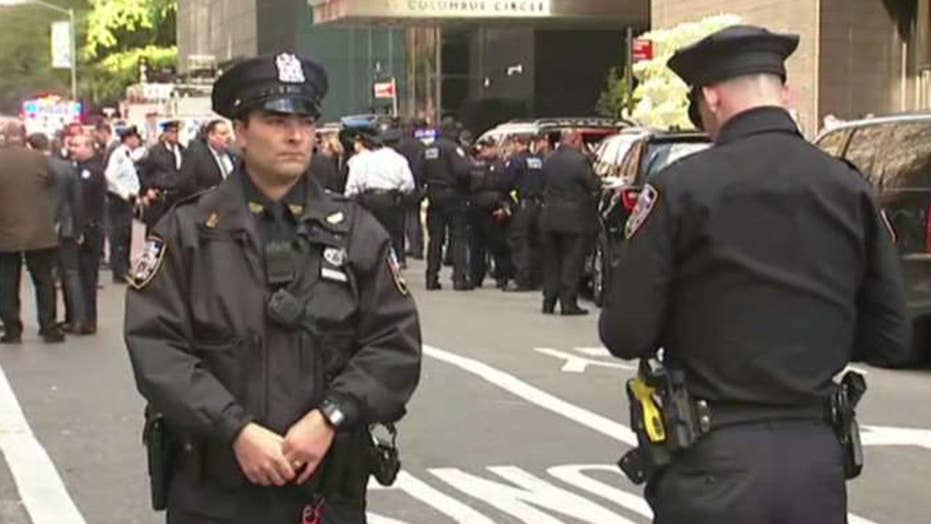 The suspicious packages sent to the homes of former President Barack Obama and Hillary Clinton and to the Time Warner Center in New York, where CNN is located, on Wednesday elicited reactions from politicians across the aisle, many of whom condemned the incidents.

The packages sent to Obama and Clinton were identified by Secret Service officials as "potential explosive devices." They arrived after an explosive device was found at billionaire George Soros' home in Bedford, New York earlier this week. It's not immediately clear if the incidents are related.

Read on for a look at what politicians are saying.

"We condemn the attempted attacks against fmr Pres Obama, the Clintons, @CNN & others. These cowardly actions are despicable & have no place in this Country. Grateful for swift response of @SecretService, @FBI & local law enforcement. Those responsible will be brought to justice," Vice President Mike Pence said in a statement posted to Twitter.

“Mrs. Trump condemns all forms of threats and violence, and thanks law enforcement for their heroic efforts," First Lady Melania Trump's spokeswoman, Stephanie Grisham, said on behalf the first lady regarding the attempted attacks.

"I strongly condemn the attempted acts of violence against President Obama, the Clinton family, @CNN & others. There is no excuse—America is better than this. Gratitude to the @SecretService and law enforcement for all they do to keep this nation safe," First Daughter Ivanka Trump wrote on Twitter.

Speaking from Florida, where Clinton is campaigning for Andrew Gillum, the Democratic nominee for governor in the state, Clinton said: "We are fine, thanks to the men and women of the secret service who intercepted the package addressed to us long before it made its way to our home."

“I stand with all Americans in condemning today’s attempted acts of domestic terrorism. As we continue to learn more, Americans are united in gratitude for the first responders — the Secret Service, the Postal Service, and other law enforcement — who protect our leaders and public figures from such unconscionable acts," Senate Majority Leader and Sen. Mitch McConnell, R-Ky., said in an emailed statement.

“Violence against private citizens, public officials and media organizations has no place in our democracy. I am thankful for the bold and swift action of law enforcement to ensure no one was hurt,” Sen. Elizabeth Warren, D-Mass., wrote on Twitter.

"Attempting violence against public officials, private citizens, journalists, or anyone has no place in our free and lawful society," Sen. Tim Kaine, D-Va., wrote on Twitter.

"This is an ongoing situation that President Trump and his admin are monitoring closely. Our condemnation of these despicable acts certainly includes threats made to CNN as well as current or former public servants. These cowardly acts are unacceptable and won't be tolerated," White House Press Secretary Sarah Sanders wrote, also sharing a formal White House statement.

"Attacks and threats against anyone are wrong and un-American - be they the Clintons or Obamas or CNN or anyone you may disagree with. Thank you to law enforcement who risks their lives to address these threats and find and prosecute the perpetrators," Sen. Bob Menendez, D-N.J., wrote on Twitter.

"I strongly condemn these targeted acts of attempted violence. This type of dangerous extremism is unacceptable, and I‘m thankful for the quick response from law enforcement officials to these threats," Sen. Dick Durbin, D-Ill., wrote on Twitter.

"I’m thankful to law enforcement who discovered these explosives. Whoever has engaged in these violent acts must be held fully accountable," Sen. Bob Casey, D-Pa., wrote.

"Threats of violence toward any American are unacceptable. Whoever is responsible must be found and held accountable to the fullest extent of the law. A huge thank you to law enforcement and first responders for all they do to keep us safe," Republican Sen. John Thune, of South Dakota, wrote on Twitter.

"These attempted attacks that have been made are beyond criminal, they are acts of pure terror. Violence and terror have no place in our politics or anywhere else in our society," wrote Rep. Steve Scalise, R-La.

“Thank you to law enforcement organizations and first responders throughout the nation for their work to protect the targets of these uncovered threats. I also express my deep appreciation to Capitol Police for keeping members of Congress and their staffs safe," Rep. Bill Pascrell, D-N.J., wrote in an emailed statement.

Pascrell went on to criticize President Trump, writing, "For years now, Donald Trump has been calling for the jailing of his critics and has lauded violence against journalists. The revolting ‘Lock Her Up’ chants have stoked the flames of hate. The slurs against George Soros that Republicans continue to invoke are dredged up from centuries of nauseating anti-Semitism."

"They have helped create an environment that has fostered all this. They must stop trying to divide America and help us lower the national temperature. As I have long been concerned about, the danger of right-wing extremism cannot be ignored and more attention must be paid to it before even worse violence occurs," he continued.

"Those behind such reprehensible acts must be brought to justice. We cannot tolerate any attempt to terrorize public figures. I am grateful to the @SecretService, Capitol Police, and all law enforcement who guard against these threats," House Speaker Paul Ryan, R-Wis., said on Twitter.

"Violence is never OK. Reports of bombs sent to the homes of Obama, Clinton, and Soros are deeply, deeply disturbing. America is better than this. Political disagreements are fine, even healthy, but we should always be civil and respect each other’s humanity," Sen. Ted Cruz, R-Tex., wrote on Twitter.

In a tweet, Democratic Governor Andrew Cuomo, of New York, wrote: "We are New Yorkers. We are smart. We are tough. We are resilient and we will not allow these terrorists to change the way we lead our lives."

"Every American should be angry about these potentially explosive devices targeting U.S. political figures. We should not ever tolerate terrorism against anyone. Period. The full weight of the federal govt should be used to find, arrest, prosecute & punish whoever is behind this," Sen. Marco Rubio, R-Fla., wrote on Twitter.

Rubio later added:  "An attack on an American who happens to be a Democrat, Republican or Independent is an attack on America. The terrorist behind this will soon find out that while a free people have politics that are conflictive,if you try to kill any of us you will have to face all of us."

"Once again, we are reminded of the heroism of America’s first responders as they work to counter these attempted attacks. The goal of terrorists is to instill fear. We will not allow them to diminish our commitment to building a brighter future for communities across America," House Minority Leader Nancy Pelosi, of California, wrote on Twitter following the attempted attacks.