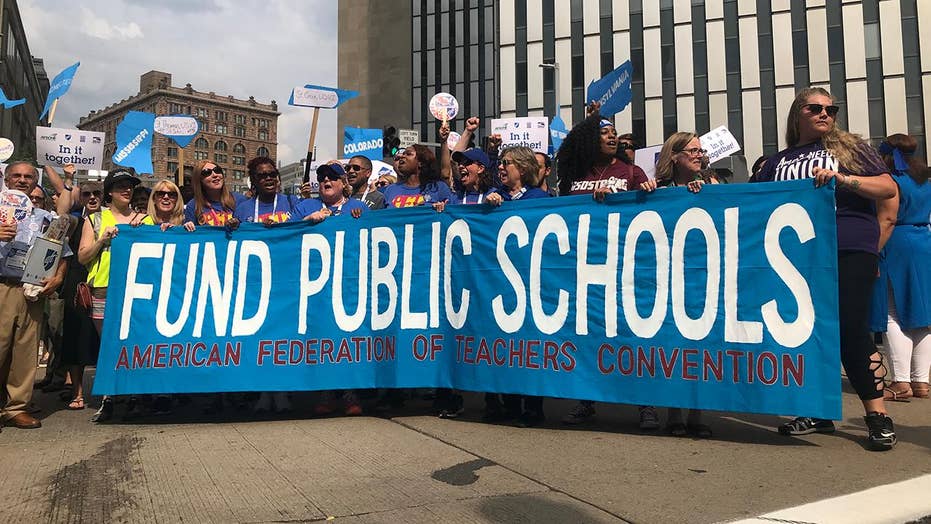 PITTSBURGH – Through a blazing heat, a crowd of more than 3,000 teachers and union workers organized and marched in Pittsburgh on Saturday as they vowed to make their voiced heard in apparent defiance to the Supreme Court’s recent decision.

Last month, the court dealt a crushing blow to public unions in a 5-4 decision that allows public workers to opt-in to paying union fees – effectively removing forty years of protections and overturning laws in 22 states.

“Let’s make no mistake this was an existential attack on us,” said Randi Weingarten, president of the American Federation of Teachers (AFT) union. “But what they didn’t expect was for workers to choose unions and their communities.”

She said that membership after the court’s Janus vs. AFSCME decision is at an all-time high at 1,755,000.

The demonstration took place at the American Federation of Teachers conference, which saw appearances by former Secretary of State Hillary Clinton and Senators Elizabeth Warren, D-Mass., and Bernie Sanders, I-Vt. The conference continues until Monday.

“You, through the AFT, have been on the front lines of some of the most urgent fights for our country’s future; and, as Randi  just reminded all of us, we have to gear up again, because the challenges we face now are truly unlike any we have seen for some time,” said Clinton on Friday. "Unions are not going anywhere."

In last month’s decision, the court’s conservative majority argued that union contract negotiations over pay and benefits were inextricably linked with its broader political activities. The court concluded that union workers had a limited constitutional right not to underwrite such “speech.”

“On paper it was a horrible thing but I don’t think it’s going to stop us one bit,” Elena Brantley-Phillies, a member of the Detroit Federations of Teachers, told Fox News; while Jesse Sharkey, president of the Chicago Teachers Union, said: “Honestly, we don’t put a lot of stock in the Supreme Court, we get our power from being united, being together marching in the streets and being strong in our schools and classrooms.”

Weingarten called the decision a “manipulation of the constitution.”

“They have attacked us and perverted and weaponized the First Amendment, the freedom of speech in a way that no one recognizes,” she said.

Though it is difficult to predict with precision, experts and union officials have said they could lose 10 percent to one-third of their members, or more, in the states affected, as conservative groups seek to persuade workers to drop out.

“This was a great upholding of First Amendment rights - the right not to be forced…to associate with a group that you don’t like and agree with and not being forced to support political speech you don’t like or agree with,” said Hans Von Spakovsky, senior fellow of the Heritage Foundation told Fox News.

Union leaders are now using the decision to energize and empower members to keep their eyes set on the 2018 mid-term elections, touting that when unions vote change happens.

“I’m optimistic because people get what’s going on in this county and they understand what the forces are against us, and we are pushing forward together,” Weingarten said.