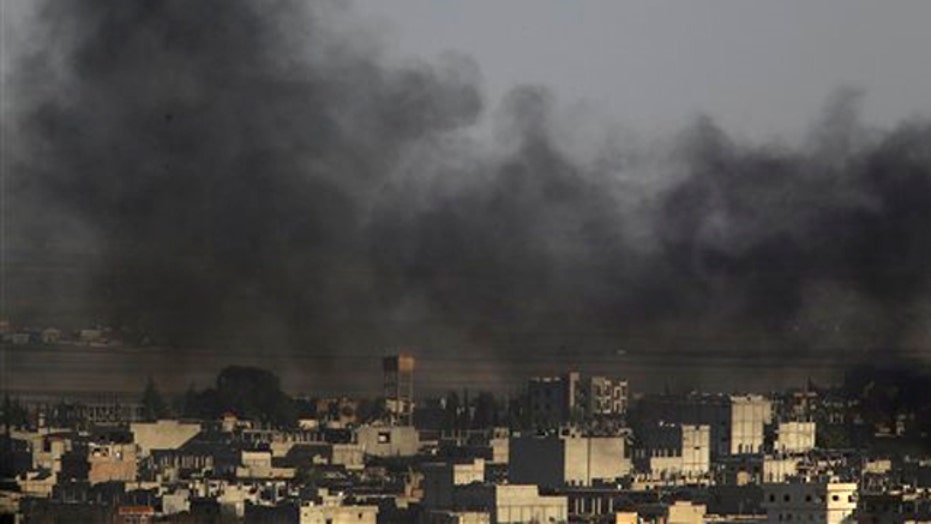 Karwan Zebari weighs in on the crisis

Turkey and other American allies want the U.S. to create a no-fly zone inside Syrian territory. Yet doing that would mean embracing one of two options President Barack Obama long has resisted: cooperating with Syrian President Bashar Assad's government or taking out its air defenses, an action tantamount to war.

There are increasing demands for the creation of a secure buffer on the Syrian side of the border with Turkey.

The U.S. and others in the coalition fighting the militants are pleading with Turkey, a NATO ally, to prevent the fall of Kobani, a border town where the United Nations is warning of mass casualties.

A "safe zone" would require Americans and their partners to protect ground territory and patrol the sky, meaning enforcement of a no-fly area.

For Turkey, a buffer might stem the flow of refugees and could give Syrian opposition fighters a staging ground for their drive to oust Assad, an Ankara aim.

The U.S. wants to keep the focus on combating Islamic State militants who have captured large areas of northern Syria and Iraq.

Some of America's closest partners and Obama's fiercest foreign policy critics are sympathetic to Turkey's request.

France came out in support this past week. The Republican leader of the House Foreign Affairs Committee believes Arab countries would shoulder the load. Even Secretary of State John Kerry says a no-fly zone is worth examining.

For the U.S. military, there are red flags about establishing an area in Syria safe from attacks by the Islamic State group and Syria's air force.

Gen. Martin Dempsey, the chairman of the Joint Chiefs of Staff, has estimated it would require hundreds of U.S. aircraft and cost as much as $1 billion a month to maintain, with no assurance of a change in battlefield momentum toward ending the Syrian civil war.

The Pentagon learned that lesson in Iraq, when in 1991 in the aftermath of the Gulf War, it established a no-fly zone over northern Iraq to protect Iraqi Kurds and another protective zone over southern Iraq to protect Shiites. Those zones were enforced by U.S. Air Force and Navy pilots for a dozen years, until the March 2003 invasion of Iraq.

A zone in Syria would set the stage for a direct confrontation with one of the Mideast's most formidable air defenses, a system bolstered in recent years by top-of-the-line Russian hardware.

Moscow infuriated Washington last year when it confirmed that it would sell to Syria its S-300 anti-aircraft missiles, considered to be the cutting edge in aircraft interception technology.

The political challenges of a no-fly zone may prove even greater.

Given the threat to U.S. pilots, the Pentagon would need rescue personnel stationed nearby, perhaps in Turkey or Iraq. If a plane were downed, American troops then would have to hit the ground in Syria, which Obama repeatedly has ruled out.

Direct military action against Assad's government also would stretch the United States' already tenuous claims that intervening in Syria is legal under U.S. and international law.

Many members of Congress are challenging Obama's justification for war on the basis of the Bush administration's 2001 authorization to fight al-Qaida. The Islamic State group grew from the al-Qaida movement, but the two now are enemies. The U.S. has no U.N. mandate to wage war in Syria.

The U.S. could try for an accommodation with Assad. But even if Syrian forces are similarly battling the Islamic State militants, Obama has ruled that out because of alleged human rights violations and war crimes by those forces. Western governments and human rights groups cite massacres of civilians and opposition forces and chemical weapons attacks by Assad's troops.

Washington is searching for an alternative approach with Turkey.

Turkey says it will support efforts to train and equip the Syrian opposition. A senior U.S. official confirmed Saturday that Turkey has agreed to train the Syrian moderates inside Turkey. The official was not authorized to discuss the negotiations publicly and spoke on condition of anonymity.

Kerry, who was heading to a conference in Cairo on Gaza reconstruction this weekend, was expected to discuss the effort against the Islamic State group with officials from Arab countries that are pressing for more robust American action.