Florida was once the nation’s premiere swing state, the electoral battleground that in 2000 handed then-Texas Gov. George W. Bush the presidency with a margin of just 500 votes.

But after Republicans shellacked Democrats in Florida’s statewide elections for governor and senator on Tuesday, it’s pretty clear that the state has shifted from purple to red. Florida does not have a single Democrat holding statewide office.

"Thanks to the overwhelming support of the people of Florida, we not only won election, we have re-written the political map," Republican Gov. Ron DeSantis proclaimed at his Election Night victory celebration. "Thank you for honoring us with a win for the ages."

DESANTIS CRUSHES CRIST TO CRUISE TO RE-ELECTION IN FLORIDA

It was a similar story in the state’s Senate race, with Republican Sen. Marco Rubio making history as the first Republican in the Sunshine State to win a third six-year term. Even though he was dramatically outraised and outspent by Democratic challenger Rep. Val Demings, Rubio won re-election by over 16-points, according to the latest vote count.

Fueling the GOP wave in Florida, the party’s increasing support from Hispanic voters, who are one of the fastest-growing demographic groups in the state.

"It’s great to be here, gathered in the red county of Miami Dade," Rubio touted in his victory speech.

Miami Dade County – with over two million residents, is Florida’s most populous – has long been a Democratic stronghold. But Rubio and DeSantis both carried the county on Tuesday.

Rubio, who’s Cuban American and is the state’s longest-serving Hispanic politician, is recognized as a driving force in Republican efforts to win over Spanish-speaking voters in Florida. 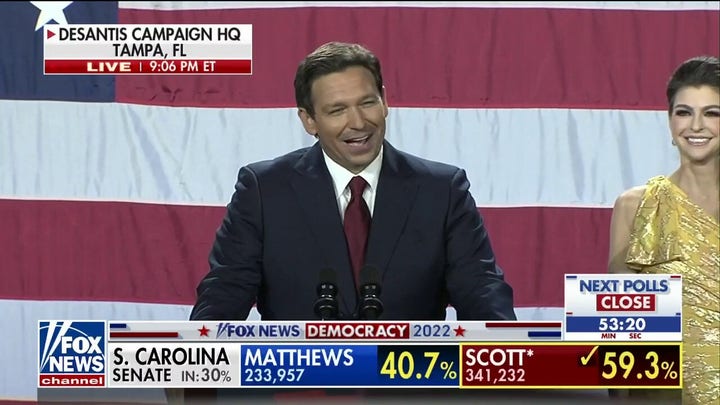 Former President Barack Obama narrowly carried Florida in the 2008 and 2012 elections, and former President Donald Trump won the state by a razor-thin margin in 2016. Thanks to the inroads Trump made in Miami-Dade in the 2020 presidential election, he widened his victory margin in the entire state, carrying it by roughly three and a half points over now-President Biden.

Longtime Republican pollster Neil Newhouse, a veteran of numerous presidential and statewide campaigns, noted that "Republicans have connected with voters on issues they care about, and Democrats are not talking about the concerns voters have on a day-to-day basis. That combined with the appeal to Hispanic voters has turned the tide in Florida from a purple state to a red state."

For Democrats, prospects are bleak in Florida.

Kevin Cate, a veteran Florida-based communications consultant and a veteran of Obama’s 2008 presidential campaign, tweeted earlier on Tuesday that "it's that bad. Complete collapse. We either reset or go extinct."