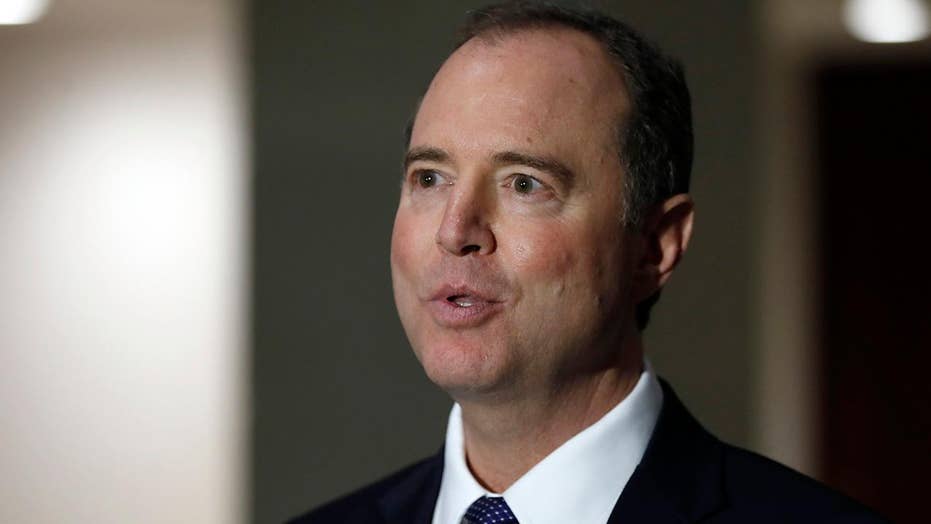 Democrats' response to the Republicans' memo regarding possible FISA abuses is released with redactions; Catherine Herridge discusses initial takeaways from the document.

The House Intelligence Committee on Saturday released the Democratic rebuttal to a GOP memo that outlined alleged government surveillance abuses during the 2016 presidential campaign. And that rebuttal came with heavy redactions.

The Democratic memo was voted out of committee earlier this month but was redrafted after the White House demanded that sensitive information be stripped out before the document was made public. The Justice Department and the FBI claimed the initial draft would reveal information about sources and methods, ongoing investigations, and other sensitive information.

DEMS' REBUTTAL TO GOP FISA MEMO IS RELEASED; TRUMP DEEMS IT A 'BUST'

That 10-page memo was significantly redacted, and left readers with a mystery to ponder: What's under the black bars blocking sometime-lengthy segments of text.

The majority of redactions appear to be related to intelligence about Russian activities, particularly in regard to contacts that former Trump adviser Carter Page had with Russian-linked individuals. Republicans claim that in seeking a Foreign Intelligence Surveillance Act (FISA) warrant against Page, the DOJ and the FBI abused the process by omitting information about the political motivations and funding behind an anti-Trump dossier the agencies purportedly relied on in pursuit of that warrant.

One section that has multiple redactions is under the heading of "Page’s connections to Russian Government and Intelligence Officials.” Segments redacted include what Page had an “extensive record” of doing before he joined the Trump campaign. It also redacts the details of a Russian intelligence officer’s alleged targeting of Page for recruitment.

One lengthy redaction relates to another Trump aide, George Papadopoulos, who had a conversation with individuals linked to Russia in April 2016. The information those individuals passed to Papadopoulos is redacted, but the memo says that it was that information which led the FBI to initiate a counterintelligence investigation in July 2016.

A line in the same paragraph gives some indication as to the redacted information by saying that the committee would later learn “that the information the Russians could assist by anonymously releasing were thousands of Hillary Clinton’s emails.”

In another section, it redacts the name of an FBI agent, as well as appearing to redact the number and name of individuals into whom the FBI had opened sub-inquiries. It also redacts information related to compensation that the FBI considered giving to dossier author and former British spy Christopher Steele.

Perhaps most significantly, in the process of countering the Republican claim that the DOJ relied on the anti-Trump dossier for its FISA warrant, the Democratic rebuttal outlines “additional information obtained through multiple independent sources that corroborated Steele’s reporting. It then provides three bullet-pointed paragraphs, almost all of which are redacted.

While Democrats claimed that the memo undermines many of the claims in the GOP memo, Republicans were quick to dismiss the Democrats' memo -- even issuing their own lengthy rebuttal to the rebuttal.

President Trump, meanwhile, took to Twitter to declare it a “total political and legal BUST.”