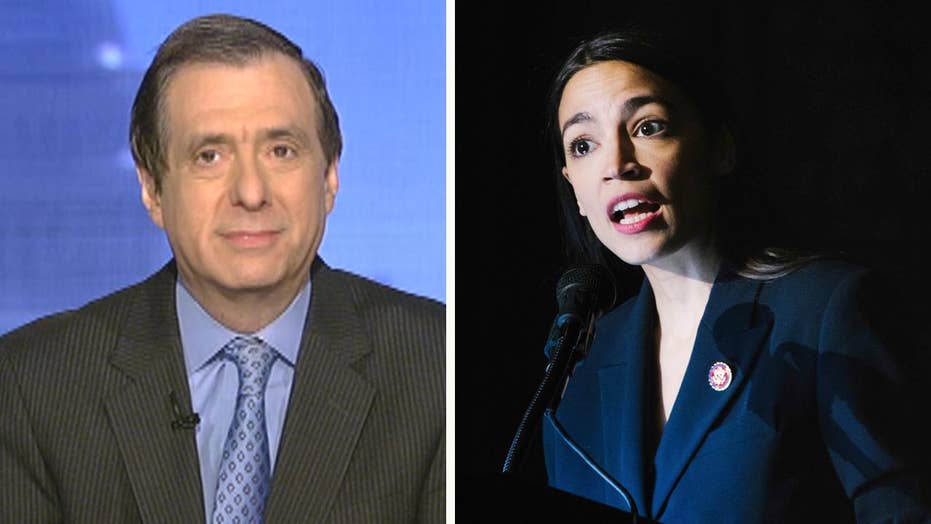 'MediaBuzz' host Howard Kurtz weighs in on the dramatic shift left in the Democratic party and how it could affect moderate candidates in the 2020 presidential election.

If you pulled a Rip Van Winkle last fall and woke up today, you'd be stunned by the new Democratic Party and its sudden embrace of uber-liberal ideas.

Suddenly, it seems, much of the party is championing radical-sounding proposals with cool slogans, gargantuan price tags and little chance of becoming law.

I happen to think this is a major miscalculation, not because I'm taking a stand on this or that policy but because it tees things up for Donald Trump and the GOP to paint them as the party of socialism.

And this progressive branding, which is what it's becoming, makes life difficult for the more moderate Democrats who led the charge in the 40-seat pickup in the House.

Both parties face this dilemma at the start of the primary process. What excites the base (left or right) can become an albatross during the general, when candidates usually pivot to the center.

But the complicating factor for the Democrats is that their social-media stars, led by Alexandria Ocasio-Cortez, are also grabbing all sorts of attention, even though they wield little power in Washington.

And make no mistake, we're talking about policies that were too far left for Barack Obama and Hillary Clinton.

Here's the lead of a Washington Post piece on the "head-snapping list" embraced by the 2020 Democrats: "Tear down the border wall. Pay slavery reparations. Upgrade every building in America. Tax the assets of rich people, and pack the Supreme Court with four new liberal judges."

Kamala Harris, seeking to solidify her African-American base, has come out for slavery reparations, and Elizabeth Warren matched that and said Native Americans should also be included. Most of them are signing onto the Green New Deal. And with a few exceptions like Amy Klobuchar, they love Medicare for All, with Harris saying it should replace all private health insurance plans.

KAMALA HARRIS DISMISSES CONCERNS ABOUT GREEN NEW DEAL PRICE TAG: 'IT'S NOT ABOUT A COST'

It doesn't take much to imagine the 30-second ads.

The New York Times finds Democratic lawmakers in conservative districts fending off questions from voters about whether they stand with the "socialism" and "anti-Semitism" they see coming out of the House.

And in a geographical piece on whether the Dems should focus on the Midwest or the Sun Belt, the Times says "there is a growing school of thought that Democrats should not spend so much time, money and psychic energy tailoring their message to a heavily white, rural and blue-collar part of the country when their coalition is increasingly made up of racial minorities and suburbanites." In short, focus on more liberal areas.

They may be taking a leaf from the Trump playbook, using bombastic rhetoric and sweeping promises as an alternative to Clintonian incrementalism. But there's a price to be paid for that.

I suppose there's an argument that galvanizing a surge of liberal voters in such states as Arizona and Georgia would be the party's best bet. But the Democrats lost to Donald Trump in Michigan, Wisconsin and Pennsylvania, and given the vagaries of the Electoral College, I doubt they can win the White House without getting at least two of those states back. Why surrender their claim as the blue-collar party?

While AOC is only 29, she generates so much media attention, positive and negative, that she's become a definite factor in this national debate.

OCASIO-CORTEZ SAYS 'LEGITIMATE QUESTION' NEES TO BE ASKED: 'IS IT OKAY TO STILL HAVE CHILDREN?'

Conservatives don’t need to pick a fight with her on every little issue. AOC recently announced that to pay her staff a good wage, no employee will make less than $52,000 and none more than $80,000 — meaning she'll probably hire fewer workers and forego the highly paid chief of staff types.

On "Fox & Friends," Pete Hegseth called this "socialism and communism on display." That enabled AOC to fire back that "the GOP is so disconnected from the basic idea that people should be paid enough to live that Fox actually thinks me paying a living wage in my office is 'communism.'"

Such spats will be quickly forgotten, but unless there's a course correction, the debate over the Democrats' image as an increasingly left-wing party will echo for a long time to come.