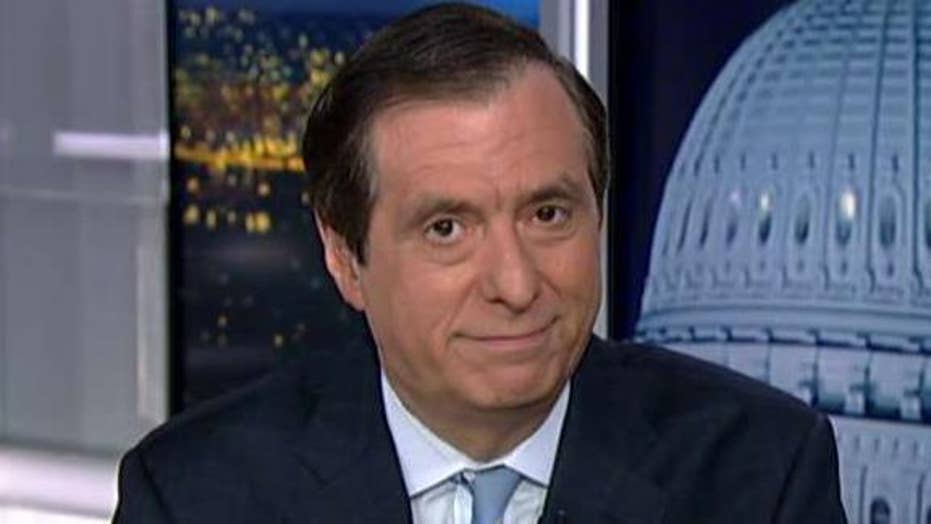 Howard Kurtz breaks down the top moments from the Democratic debate

'MediaBuzz' host Howard Kurtz reacts to the moderators' and 2020 candidates' performances during the debate.

Long-simmering policy disputes between Joe Biden, Bernie Sanders, Elizabeth Warren and a slew of other candidates exploded into the open during Thursday night's Democratic primary debate, as the candidates -- often with raised voices -- laid bare their fundamental disagreements on "Medicare-for-all," immigration and more.

Intermittent efforts by some candidates to show unity and keep the heat on President Trump repeatedly failed, with most striving instead to score an aggressive debate "moment" onstage in Houston.

Amid the melee, Pete Buttigieg offered an exit ramp from the feuding as he criticized the Democrats for "scoring points against each other" -- prompting Julian Castro to interject, "That's called an election!"

"Yeah, but a house divided cannot stand," Amy Klobuchar retorted, to no avail.

The economy, which has performed well by virtually all major metrics in the past year, went largely undiscussed during the raucous three-hour debate. And, even as House Democrats made a push towards potentially impeaching the president this week, that topic conspicuously did not come up either.

The brouhaha at the ABC News-hosted debate began from the outset, when Biden set the tone by going after Warren directly.

"For a socialist, you've got a lot more confidence in corporate America than I do," Biden shot back at Sanders shortly afterward, after the U.S. senator from Vermont suggested corporations would return the money they currently make on high insurance premiums if his sweeping plan were implemented.

Sanders responded by referring to cancer treatment, leading Biden to sharply reply, "I know a lot about cancer — it's personal to me." Brain cancer killed Biden's son Beau four years ago.

The clashes settled any questions about whether the top-tier candidates – meeting onstage for the first time, with the addition of Warren – would hold back. To the contrary, Biden was clearly mindful that Warren has been surging in recent weeks and was ready to fight to hold his frontrunner status, while several candidates continued to pile on Biden as they have at past debates.

But the most heated clashes of the night came between Biden and fellow Obama administration member Castro, who tangled at length in direct and seemingly personal terms.

"I'm fulfilling the legacy of Barack Obama, and you're not," Castro said, referring to the millions of Americans who lack health coverage -- leading Biden to respond, "That'll be a surprise to him."

Castro hammered Biden for claiming that individuals would not be required to buy into his health care plan in order to receive coverage.

"Anyone who can't afford it gets automatically enrolled in the Medicare-type option we have," Biden had said. "If you lose the job from your insurance company, from your employer, you automatically can buy into this."

Biden responded correctly, as the crowd roared in support of Castro, that he had said that people would be "automatically enrolled" under his plan.

Later on, during a discussion on immigration, Castro hit Biden for distancing himself from Barack Obama's record when it suited him, only to emphasize his tenure as vice president when it was beneficial.

"He wants to take credit for Obama's work, but not have to answer any questions!" Castro charged.

"I stand with Barack Obama all eight years — good, bad and indifferent," Biden said. "I did not say, 'I did not stand with him.'"

Biden, meanwhile, drilled Warren and Sanders for refusing to directly answer whether taxes would go up under their preferred Medicare-for-all proposal.

"The only question here in terms of difference is where to send the bill," Warren eventually offered.

She added: "We all owe a huge debt to President Obama, who fundamentally transformed health care in America, and committed this country to health care for every human being. And now the question is, how best can we improve on it?"

WHAT'S THAT IN THE SKY OVER THE DEBATE? IT'S A BIRD? NO, IT'S A PLANE FROM THE TRUMP CAMPAIGN

Warren maintained that she had "never actually never met anybody who likes their health insurance company ... what they want is access to health care."

Sanders, his voice rising, repeated a familiar line in defense of his "Medicare-for-all" plan against supposed distortions by his opponents, saying, "I wrote the damn bill."

"Maybe you have run into people who love their premiums," Sanders barked. "I haven't."

"While Bernie wrote the bill, I read the bill," Klobuchar snapped back later, to applause. Klobuchar, who does not support Medicare-for-all, maintained that millions would lose their private coverage.

Sen. Kamala Harris, meanwhile, insisted she had "always" supported Sanders' health care plan, even as she has publicly waffled as to what would happen to private insurance plans if she were elected. She has said all private health care plans would be eliminated, as Sanders prefers, only to quickly walk back that idea.

Tensions were evident both on and off the stage. Toward the end of the debate, a group of protesters interrupted Biden for nearly a minute -- just before he began speaking about personal tragedies in his life, including the death of his first wife and daughter in 1972.

Biden also repeated the inaccurate claim that children were not kept in cages under the Obama administration. The most widely circulated photo of children in cages in immigration detention centers, though falsely attributed to the Trump era, was in fact taken during Obama's presidency.

"Nobody should be in jail for a non-violent crime."

— Joe Biden, during the debate

The former vice president also seemingly made a bungled and anachronistic appeal to technology, urging attendees, "Play the radio. Make sure the television, excuse me, make sure you have the record player on at night, the phone..."

That response came after a question about what Americans can do to help roll back the legacy of slavery. Biden was suggesting that children need to "hear words" outside of the school environment to improve their vocabulary. Then, when a moderator tried to cut off his lengthy answer, Biden fired back, "No, I'm gonna go like the rest of them do -- twice over."

In another head-turning moment, during a discussion on criminal justice reform, Biden suggested that nonviolent crimes should never result in prison time.

"Nobody should be in jail for a non-violent crime," Biden said. "When we were in the White House, we  released 36,000 people from the federal prison system."

But before all the battles got underway, the debate immediately brought about a bizarre moment early on, when longshot candidate Andrew Yang revealed he would randomly give 10 families that registered on his website $1,000 per month -- what he called a "freedom dividend."

The plan prompted a sustained moment of silence from Buttigieg, who took several seconds to begin his own opening statement once Yang finished, and eventually said, "That's original, I'll give it that."

Some suggested the plan might even violate campaign-finance laws.

Yang has advanced a plan to give every American at least $1,000 per month if elected -- via taxpayer funds.

For the other candidates, the evening offered an opportunity for an electric moment and a potential momentum boost. Harris' sustained attack on Biden's decades-old opposition to federally required busing during the June primary debate gained her the nation's attention, even as critics said she had mischaracterized the former senator's position.

Harris' numbers have fallen since that moment, and big-money donors reportedly said this week they would abandon her candidacy if she didn't have a strong performance on Thursday.

In her opening statement, Harris did just that. She dubiously claimed that the only reason Trump has not been indicted is that Justice Department guidelines prohibit the indictment of a sitting president -- a proposition former Special Counsel Robert Mueller has explicitly denied.

For his part, Trump's campaign was visible during the debate in Houston -- overhead. His campaign was using a plane to fly a banner that reads “Socialism will kill Houston’s economy."

O'Rourke, meanwhile, continued to refocus his campaign on pushing unprecedented gun-control measures -- including mandatory buybacks of legal firearms. O'Rourke, when he was running for the Senate in Texas just last year, explicitly said that he opposed confiscating legally purchased AR-15s.

In his opening statement, O'Rourke urged Americans to be "bigger" than petty politics -- just after he stated that the recent mass shooting in El Paso, Texas, was inspired by the president. In his manifesto, the shooter explicitly said Trump had not done so.

O'Rourke doubled down on his mandatory gun-buyback program later on: "We have a white supremacist in the White House, and he poses a mortal threat to people of color all across this country." He said "hell yes" when asked if guns needed to be confiscated.

O'Rourke added: "When we see that being used against children. ... Hell yes, we're going to take your AR-15, your AK-47. We're not going to allow it to be used against our fellow Americans anymore."

His campaign, in a riff on Warren's virtual slogan, later tweeted, "Beto has a ban for that," next to a photo of a gun.

After the debate, a Texas state representative tweeted, "My AR is ready for you Robert Francis," using O'Rourke's birth name. Twitter quickly took down the post from Republican state Rep. Briscoe Cain.

O'Rourke responded on Twitter: "This is a death threat, Representative. Clearly, you shouldn't own an AR-15—and neither should anyone else."

"A few weeks ago, a shooter drove ten hours, inspired by this president, to kill people who look like me," Castro said. "White supremacy is a growing threat to this country, and we have to root it out."

For her part, Harris implicitly blamed Trump for the violence.

"Well, look," Harris said. "Obviously he didn't pull the trigger, but he's certainly been tweeting out the ammunition."

Harris then took aim at Biden, and advanced her plan to unilaterally take executive action on guns if necessary, bypassing Congress.

"Hey Joe — instead of saying, 'No we can't,' let's say, 'Yes we can," Harris said, referring mockingly to Obama's campaign slogan.

Concerning climate change, Warren sounded an apocalyptic note, saying flatly that "every living thing" could die. She noted that experts have warned that there is little time left to avert catastrophe. United Nations scientists have claimed the world has 10 years to get global warming under control since at least 1989.

On trade, the candidates largely agreed that China was acting improperly -- "they steal our intellectual property," Harris said -- but all asserted that Trump's approach of ever-increasing tariffs was reckless.

"The bottom line is this," Harris said. "Donald Trump, in office, on trade policy, reminds me of that guy in 'The Wizard of Oz.' You know, you pull back the curtain, it's a really small dude."