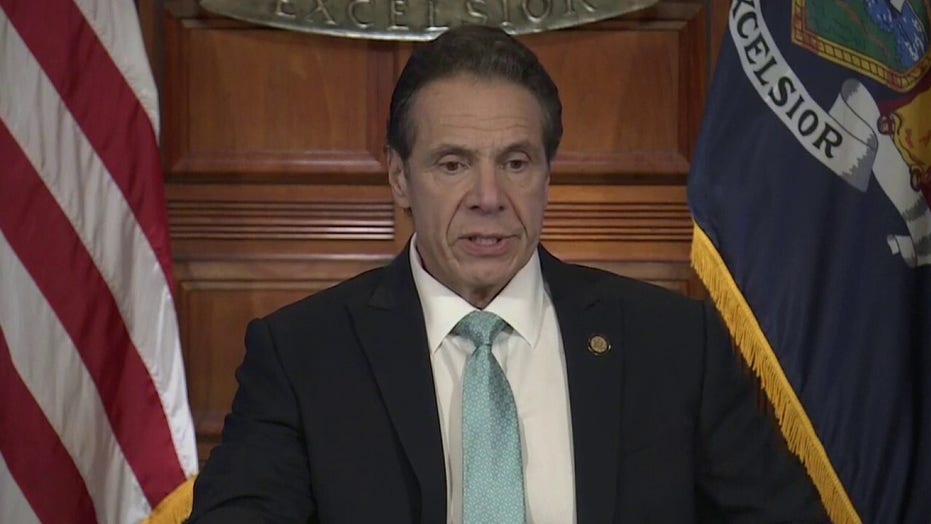 New York Gov. Andrew Cuomo is threatening to sue Rhode Island over its new coronavirus policy that calls for police to stop cars with New York license plates and has seen National Guard members go door-to-door to ask if anyone has arrived from the Empire State.

Rhode Island Gov. Gina Raimondo -- like Cuomo, a Democrat -- announced the drastic new policies last week to limit the spread of the coronavirus. New York is the epicenter of the outbreak in the U.S., confirming more than 52,000 cases of COVID-19 and recording more than 700 deaths.

"I understand the goal ... but there’s a point of absurdity, and I think what Rhode Island did is at that point of absurdity," said Cuomo. “We have to keep the ideas and the policies we implement positive rather than reactionary and emotional.”

Andrew Cuomo D-N.Y.,  is threatening to sue Rhode Island after Gov. Gina Raimondo D-R.I., issued the drastic new policies to limit the spread of the virus

He added that he believes the two governors could "work it out."

Raimondo said the policies were intended to make sure people from New York would self-quarantine for 14 days upon arrival in Rhode Island.

“I want to be crystal clear about this: If you're coming to Rhode Island from New York you are ordered into quarantine," she said. "The reason for that is because more than half of the cases of coronavirus in America are in New York."

“I want to be crystal clear about this: If you're coming to Rhode Island from New York you are ordered into quarantine."

State Police reportedly set up a checkpoint on Interstate 95 in Hope Valley on Friday, where drivers with New York license plates had to stop and provide contact information, WPRI-TV of Providence reported. They were told to self-quarantine for two weeks.

New Yorkers who fail to comply could face fines and jail time, Raimondo said -- although she added it wasn't the goal of her policy.

A member of the Rhode Island National Guard Military Police directs a motorist with New York license plates at a checkpoint on Interstate 95 in Hope Valley, R.I., March 28, 2020, (Associated Press)

Raimondo also ordered her state's residents to stay at home -- with exceptions for getting food, medicine or going to the doctor. Nonessential retail businesses were told to close from Monday until April 13.

Cuomo also spoke about President Trump considering a quarantine for the New York City metro area before the president ultimately decided against the move.

Trump later tweeted that a travel advisory should be administered and not a quarantine.