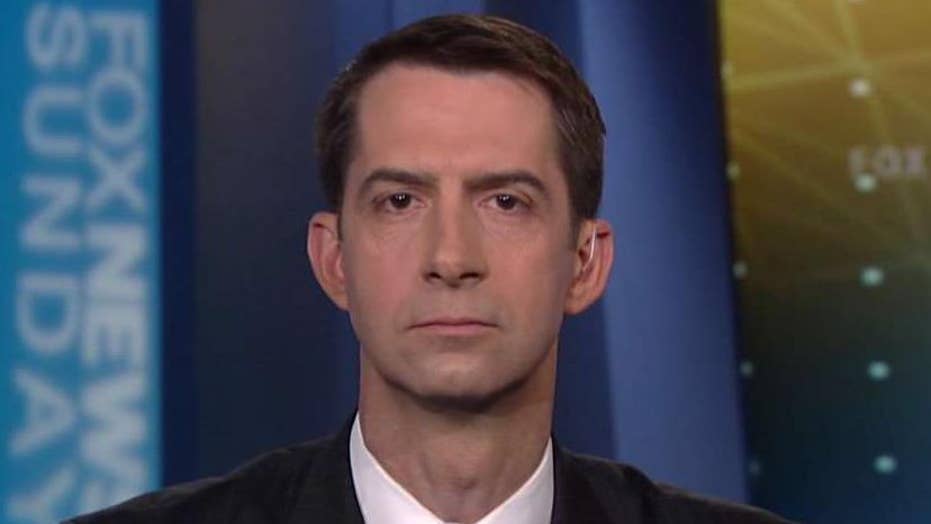 The president is recalibrating his Iran policy after calling off U.S. airstrikes against the regime. Republican Sen. Tom Cotton weighs in on what's next.

Sen. Tom Cotton, R-Ark., a member of the Senate Armed Services and Intelligence Committees, said that recent actions from Iran deserved a proper response, and warned that if the Islamic Republic does not go unchecked, it will only increase the country's hostilities toward the U.S.

This comes after President Trump decided against a possible American strike after Iran shot down an unmanned U.S. drone, believing that the 150 expected casualties from a countermeasure were not "proportionate" to the loss of an unmanned aircraft.

PENCE: 'ALL OPTIONS REMAIN ON THE TABLE' AFTER NIXED IRAN STRIKE

"Obviously I think retaliatory strikes were warranted when we're talking about foreign vessels on the high seas. I think they were warranted against an American unmanned aircraft," Cotton said on "Fox News Sunday," referring to both an attack on oil tankers in the Strait of Hormuz believed to be carried out by Iran, as well as the drone.

Cotton warned that Iran has been stepping up its actions, and if officials do not face consequences, it will only get worse.

Host Chris Wallace mentioned President Barack Obama's failure to enforce a red line against Syria in the past, and asked whether President Trump's failure to strike Iran thus far is similar. Cotton distinguished the two situations.

"First, President Obama's Syrian policy was a mess. Second, he himself in his own words drew that red line, and then third, he failed to enforce it."

"Here, President Trump's Iran policy is working," Cotton said, pointing out that Iran is "lashing out" due to feeling the effects of sanctions. He went on to note that, unlike Obama, Trump did not draw any red line "in his own language," but has made it clear that the U.S. will not tolerate any attacks on American servicemembers or citizens, which has yet to take place.

"And he's also said that major sanctions are going to be added tomorrow, which is only going to increase the sanctions that they already face, which is one very positive result so far of the maximum pressure campaign," Cotton said.

Wallace then asked if the president's decision to call off a strike will embolden Iran to act on their nuclear aspirations. Cotton said that Trump's decision to hold off on military options should encourage European allies to join the U.S. in upping sanctions against Iran.

"About Iran's threats to enrich uranium to levels beyond what was permitted in the nuclear deal ... this is really going to be a question for the Europeans, Cotton said. "I would say to those European leaders that given the fact that the president exercised restraint in this last week, they should view that as an opening to double down with the United States on those sanctions if Iran bypasses those enrichment limits."

BOLTON TO IRAN: DON'T MISTAKE 'US PRUDENCE AND DISCRETION FOR WEAKNESS'

Trump, meanwhile, will make sure that a nuclear Iran will not become a reality, he said.

"Just like an attack on an American ship or any harm to American servicemembers or citizens in the region, the president has also been very clear he will not allow Iran to approach [creating] a nuclear weapon."