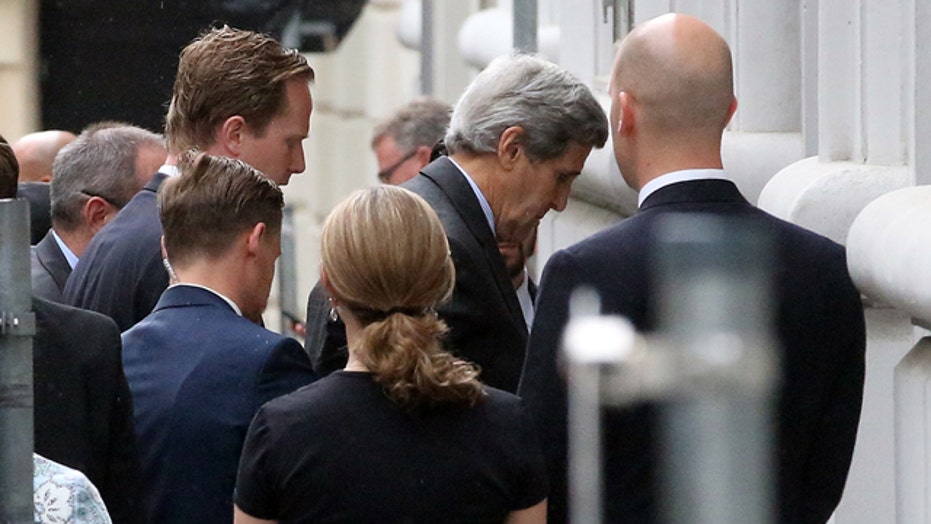 Major sticking points include embargo on arms sales to Iran

The protracted Iranian nuclear talks, after blowing through several deadlines, are starting to make U.S. lawmakers on both sides of the aisle uneasy -- as Congress prepares to weigh in with a potentially big vote.

The new deadline for talks is Friday, but negotiators already are expected to blow by a separate congressional deadline Thursday -- after which, Congress will claim the right to take a full 60 days to review any potential agreement, dragging the entire issue into the fall.

It's a stark choice. But House Democratic Caucus Chairman Xavier Becerra, D-Calif., crystallized the conundrum when word came that the already-protracted talks in Vienna were extended again.

"This is like a vote on war for me," Becerra said.

The prevailing wisdom in Washington is that the U.S. and other superpowers -- to say nothing of Israel -- simply cannot permit Iran to develop a nuclear arsenal. Defense hawks -- and increasingly not-so-hawkish lawmakers -- believe the only way to combat the construction of an Iranian nuclear array may be for the U.S. to bomb the sites. That's a hard, hard option. Such a maneuver could spawn an unprecedented conflagration in the Middle East and expose the U.S. and the West to an epic terrorism risk.

If the talks falter, the U.S. also could allow Iran to build bombs -- and then pray that Tehran doesn't lob one into downtown Tel Aviv or auction off fissile material to a terror group.

"This is life or death. This is nuclear weapons. You don't play games with it," said Becerra.

The California Democrat framed a potential roll call on a prospective agreement as a "vote of conscience."

That's the vexing question. If negotiators can't come to terms with Iran, Tehran's leaders are free to do whatever they want. If they strike a deal, then the international community has some redress if Iran strays from the terms of a pact.

Many Republicans generally abhor the fact that President Obama even entered into negotiations. But the majority of Democratic lawmakers expressed willingness to give Obama diplomatic latitude -- for a while.

Patience may be wearing thing.

A deadline dangled at the end of June. Arbitrators plowed right through it. The new deadline is Friday. And there's chatter at the Capitol that the separate congressional deadline is already passed since there's no practical way to submit all the paperwork (much of it classified) to Congress on time.

If a deal somehow got to Congress before the deadline, the review period would be just 30 days. But either calendar could actually run longer, anyway. Built-in is the possibility of an additional 22 days, to allow for back-and-forth if Congress disapproves any deal.

"These matters ought to be brought to a close," said House Minority Whip Steny Hoyer, D-Md., about additional discussions. "My concern has been that they'll be a rope-a-dope sort of performance by Iran. That they'll just string out these negotiations."

Rope-a-dope is the boxing tactic employed by Muhammad Ali against George Foreman in the "Rumble in the Jungle" in 1974. Ali leaned against the ropes for eight rounds, absorbing mostly ineffective blows doled out by Foreman. Then, once Foreman punched himself out, Ali cut loose a frightening five-punch combination. Foreman floundered to the canvass. Ali had won.

Is Iran Ali in these talks?

"The Iranians are unwilling to meet the requirements that are necessary in order for there to be an agreement," proffered Hoyer.

Congressional Democrats are now leery of the discussions after once granting the administration room to operate.

"We have to make sure we get this right. We didn't get it right with North Korea," said Rep. Eliot Engel D-N.Y., the top Democrat on the House Foreign Affairs Committee. "[The Iranians] lie. They cheat."

So right now, everyone is watching the calendar. But some don't think the calendar is that important.

"The important thing is to get a deal," said Sen. Jeanne Shaheen, D-N.H. "If it takes a couple of weeks, so be it."

"I still believe that Secretary Kerry is so desperate for an agreement that [he] will agree to anything," fretted McCain.

On Tuesday night, the president invited all Senate Democrats to the White House for a lengthy briefing on the talks. Senate Minority Whip Dick Durbin, D-Ill., described the conclave as "sober. Durbin indicated that Obama pegged the odds of reaching an accord at "50-50."

"The next few days and hours are going to make a difference," Durbin said.

The current window is crucial -- perhaps setting the stage for a big vote down the road. But Eliot Engel sees it differently.

"We missed the boat 10 years ago when the Iran program was small and it could have been taken out," lamented the New York Democrat. "We didn't do it. Now we have to pay the price."