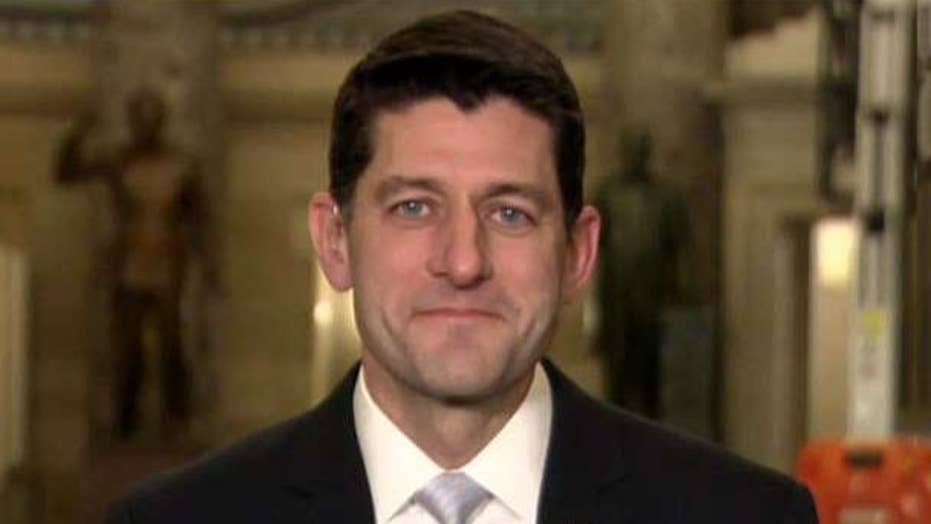 Speaker Ryan reflects on the journey to passing tax reform

House speaker goes on 'The Story' to discuss the significance of passing the historic legislation.

The House gave the final stamp of approval Wednesday to a sweeping tax reform package, handing President Trump his first major legislative victory and most Americans a tax cut starting next year.

With a 224-201 House vote, Congress sent the $1.5 trillion package to Trump’s desk. The biggest rewrite of the federal tax code since the Reagan administration will usher in steep rate cuts for American companies, double the deduction millions of families claim on their annual returns and make a host of other changes taking effect in a matter of weeks.

During a celebration at the White House with lawmakers on Wednesday afternoon, Trump called it “the largest tax cut in the history of our country” and singled out House Speaker Paul Ryan and Senate Majority Leader Mitch McConnell for praise.

“Paul Ryan and Mitch, it was a little team,” Trump said. “We just got together and we worked very hard, didn't we?”

President Trump sits at the White House with House Speaker Paul Ryan and Senate Majority Leader Mitch McConnell to talk taxes last month. The tax bill passed both the House and the Senate on Tuesday. (AP)

While the bill already earned House approval earlier Tuesday, the Senate had to ship it back for a final vote after stripping out three provisions that violated chamber rules, in a last-minute glitch. Twelve Republicans once again defected Wednesday to vote with Democrats in opposition.

Though Democrats uniformly opposed the package, the White House and GOP leaders were triumphant, vowing that the bill’s popularity would improve once taxpayers see the effect.

WHAT THE TAX BILL MEANS FOR YOU

The Tax Policy Center estimates that 80 percent of taxpayers will see a tax cut next year.

Vice President Pence on Capitol Hill ahead of the Senate vote on tax reform. (AP)

Democrats sustained their vocal opposition to the bill – they’ve dubbed it a “scam” benefiting the wealthy – into the final moments. Protesters interrupted votes in both chambers. During the Senate vote overnight, they chanted "kill the bill, don't kill us," as Vice President Pence repeatedly called for order.

Pence did not have to serve as a tie-breaker, with the bill passing the Senate on a 51-48 vote; only Sen. John McCain, R-Ariz., who is recovering from brain cancer treatment, was not present for the vote.

Pence told Fox News' "The Ingraham Angle" he was surprised that no Democrats in either chamber of Congress voted for the bill.

"I watched President Trump bring Democrat members of the House and the Senate to the White House for meetings, for meals, to sit down, to say 'we want to work with you,'" said Pence. "When you have the majority of the Democrats in the Senate sign a letter last summer taking themselves completely out of the equation, that's a disappointment not just to our administration, but to the American people."

SENATE DEMS TO REPUBLICANS: NO TAX CUTS FOR THE WEALTHY

The passage of the bill, just before the end of the year and the looming congressional recess, gives Trump a long-sought Capitol Hill victory, after repeated attempts to overhaul ObamaCare failed in the face of internal Republican divisions and unified Democratic opposition. The tax bill does include one major rollback of the Affordable Care Act, repealing the individual mandate requiring Americans to buy health insurance.

The changes to the tax system are more sweeping.

The final bill – a combination of previously passed House and Senate legislation – would slash the corporate tax rate from 35 percent to 21 percent. It would double the standard deduction used by about two-thirds of U.S. households, to $24,000 for married couples. And the $1,000-per-child tax credit would double to $2,000, with up to $1,400 available in IRS refunds for families who owe little or no taxes.

The corporate tax cut would be permanent, while the tax cuts for individuals would expire in 2026.

The Trump administration presumes that doubling the standard deduction would lead to even more families claiming it.

But those who itemize would lose some deductions.

The bill would set a new $10,000 cap on the deduction that millions use in connection with state and local income, property and sales taxes. It also would limit the mortgage interest deduction to loans up to $750,000, down from $1 million.

And it imposes a low one-time tax on companies' overseas earnings, nudging them to return money they've stashed abroad.

At the same time, the bill would lower the top rate for individual and married filers from 39.6 percent to 37 percent. Further, it would set a deduction for “pass-through” business income at 20 percent. And it would curb the so-called estate tax.

House Minority Leader Nancy Pelosi, of California, speaks during a news conference in opposition to the Republican tax bill, Tuesday, Dec. 19, 2017, on Capitol Hill in Washington. Republicans muscled the most sweeping rewrite of the nation's tax laws in more than three decades through the House. (AP Photo/Jacquelyn Martin) (AP)

These provisions and others fueled Democratic complaints that the legislation was skewed to favor corporations and the wealthy – while expanding the deficit.

On the House floor Tuesday, Rep. Terri Sewell, D-Ala., mocked Republicans who say passage of the bill would be a Christmas gift to the American people.

“I have never seen such intellectual dishonesty,” Sewell said Tuesday afternoon. “It’s more like the Grinch that stole Christmas.”

The bill would bring average initial tax cuts for Americans across all income lines, but by 2027, it would boost average levies for everyone earning up to $75,000, which includes most taxpayers, Congress' nonpartisan tax analysts estimated Monday.