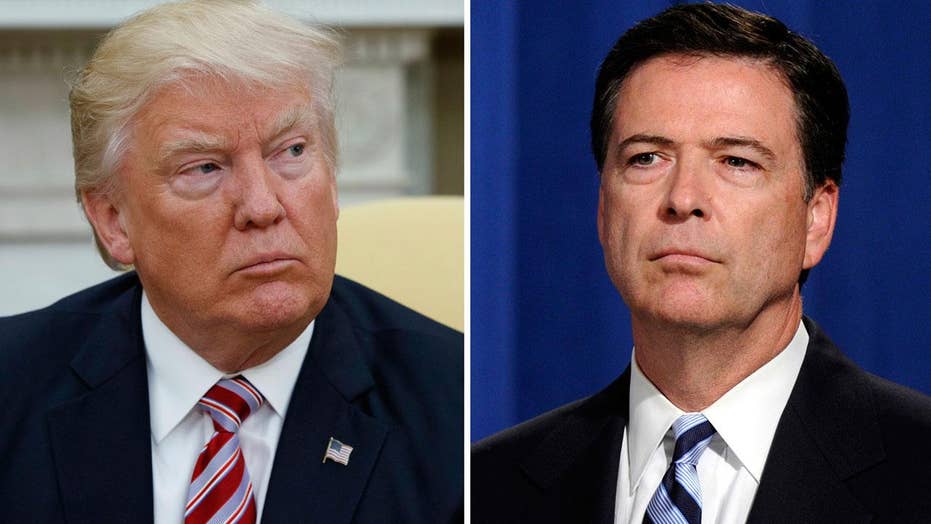 While Thursday’s testimony by James Comey focused on his private discussions with President Trump, the fired FBI director still faces questions posed months ago over links between the bureau and a British ex-spy’s mysterious – and unverified – anti-Trump dossier.

Comey was asked about the dossier, prepared by former British spy Christopher Steele, early in his testimony on Thursday morning by Sen. Richard Burr, R-N.C. But Comey declined to answer in open session, citing concerns about the sensitivity of some of the material in the report.

His decision not to discuss the issue – at least not publicly – is consistent with his response to date. As of Monday, Sen. Charles Grassley, R-Iowa, has “still not received any response” from Comey in the matter of Steele, and his London-based company, Orbis Business Intelligence Ltd. Steele’s firm was hired by Fusion GPS, a Washington, D.C. firm, to collect opposition research on then-candidate Donald Trump during the 2016 campaign.

For months, in hearings and letters, a frustrated Grassley has criticized Comey for the bureau’s failure to provide documents requested and answer questions about Steele. Grassley also called out Fusion this week for allegedly not cooperating with his committee, sending a June 7 letter seeking “all responsive documents and information” by June 14 and warning that he could consider a “compulsory process” if necessary.

As previously reported by Fox News, Comey considered the unverified dossier prepared by Steele to be so important, he insisted it be included in January's final intelligence community report on Russian meddling in the election. The FBI offered Steele $50,000 to corroborate the dossier, according to published reports, though the bureau has denied making any payments.

The Steele dossier was part of the evidence the FBI used to obtain a FISA warrant for Carter Page, a peripheral adviser in the Trump campaign the dossier named as a figure in Trump campaign dealings with Russia. In interviews with Fox News, however, Page repeatedly has denied he was the Trump campaign's point person for Moscow, and said he believes he was a target of unmasking efforts by the Obama administration.

Questions remain over exactly how the unverified dossier was passed around on both sides of the Atlantic, particularly between June and December 2016, as it was shown in parts to a variety of politicians, journalists and intelligence agencies before being brought officially to the FBI by Sen. John McCain on Dec. 9.

The person who brought the dossier to the attention of McCain last fall, former British Ambassador Sir Andrew Wood, now emphasizes to Fox News that, “Intelligence always needs evaluating of course…It is always foolish to put yourself in a position to pretend to knowledge that you do not have.”

In an email exchange, Wood said while he told McCain about the material, he “had not read and could not vouch for” it. Still, he said, the material was “produced by responsible persons.”

“I understood that its general contents were known to others in the United States. The Senator then arranged for the papers to be brought to him,” he wrote, adding: "It was up to the Senator to decide what action if any he took throughout the whole process. He is known to me as to many others as a courageous patriot. I have no doubt that he acted as he thought fit in that capacity."

Serving as Britain's ambassador to Moscow from 1995-2000, Wood's name and his relationship with Steele emerged in British Court documents obtained and reviewed by Fox News as part of Steele’s defense in a lawsuit brought against him by Russian technology guru Aleksej Gubarev. Gubarev—whose companies are mentioned in the dossier—has also filed a lawsuit in Fort Lauderdale, Florida against Buzzfeed for publishing the unverified 35 page dossier in full.

The April 2017 documents identify Wood as "an Associate of Orbis" (Page 1-Item 5), and say he was “aware of the Second Defendant's” [Steele’s] intelligence gathering for the pre-election memoranda.  (Page 2--Item 11)

But in email exchanges with Fox News on June 6, Wood told a different story.

"I have had no professional relationship with Orbis,” he wrote. “You refer to me as an ‘Associate’ (capital A) and draw some conclusions as to my role, which go beyond what it has been, that of a friend to Christopher Steele and a person among others with whom I have from time to time discussed Russian affairs.”

When asked about the role of Fusion GPS in Washington D.C., Wood wrote that "I do not know Fusion apart from the fact that it exists."

McCain's office has not responded to Fox News’ latest request for comment on the dossier. In a Jan. 11 press release, McCain stated, "Late last year, I received sensitive information that has since been made public. Upon examination of the contents, and unable to make a judgment about their accuracy, I delivered the information to the Director of the FBI. That has been the extent of my contact with the FBI or any other government agency regarding this issue."