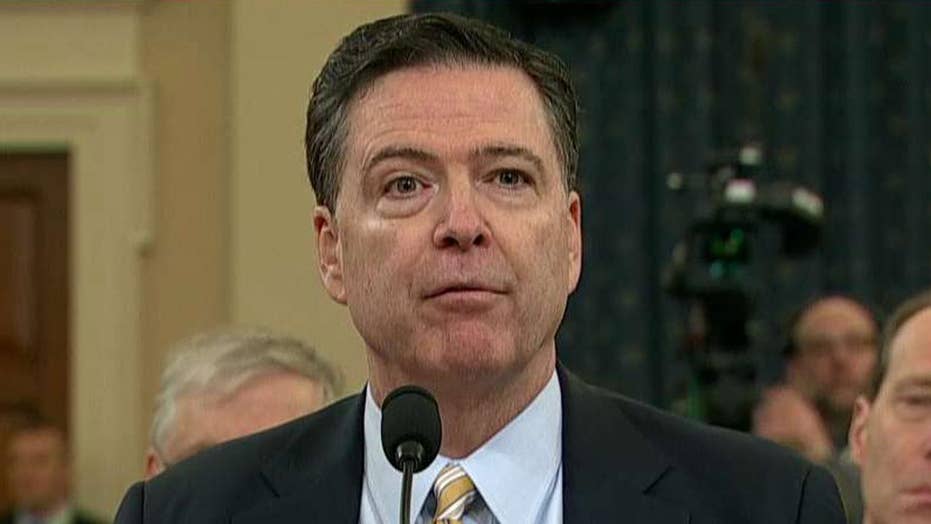 FBI Director James Comey, in an extraordinary House hearing meant to clear the air on a host of allegations relating to the 2016 campaign, confirmed publicly for the first time Monday that the bureau is probing Russian meddling in the race including possible “links” to the Trump team – while disputing the president’s claim that his predecessor wiretapped him.

The FBI director was called to testify alongside National Security Agency Director Michael Rogers for a public session of the House intelligence committee. Comey’s testimony could serve to fuel tensions with the White House, which maintains there’s no evidence of Trump-Russia collusion.

Comey was careful in his testimony not to confirm any details of what the bureau’s Russia investigation has uncovered or dismissed, saying he could not comment further since the probe is “open” and “ongoing.”

But he used his opening statement to address head-on the probe that has been the subject of news reports for months. He noted while the FBI normally would not confirm ongoing investigations, he could make an exception for such “unusual” circumstances.

“I have been authorized by the Department of Justice to confirm that the FBI, as part of our counterintelligence mission, is investigating the Russian government’s efforts to interfere in the 2016 presidential election,” Comey said. “That includes investigating the nature of any links between individuals associated with the Trump campaign and the Russian government, and whether there was any coordination between the campaign and Russia’s efforts.”

He added that this probe will “include an assessment of whether any crimes were committed.”

The White House also pushed back on Twitter, with the official @POTUS account used to highlight one section of the hearing where Rogers and Comey both said they have no evidence that Russian cyber-actors changed vote tallies in swing states.

“The NSA and FBI tell Congress that Russia did not influence electoral process,” the presidential account tweeted.

Meanwhile, Comey used his appearance to effectively knock down a series of allegations Trump tweeted earlier this month about supposed wiretapping conducted against him by his predecessor.

“I have no information that supports those tweets, and we have looked carefully inside the FBI,” Comey said, adding that the same is true for the Department of Justice.

Asked about Trump’s suggestion that the prior administration was engaged in McCarthyism, Comey responded, “I try very hard not to engage in any isms of any kind, including McCarthyism.”

He further clarified that “no president” could unilaterally wiretap anyone.

Rogers also said he’s seen no evidence to support claims that the Obama administration instructed British intelligence to spy on the Trump team.

The hearing Monday marked a rare opportunity for top intelligence and law enforcement officials to speak publicly on matters that for months have been the subject of news reports driven by anonymous sources and speculation. Trump at times has fed the frenzy, namely with his explosive allegation that the Obama administration wiretapped Trump Tower and his phones before the election.

Top lawmakers on both sides of the aisle said before and during Monday’s hearing that they’d seen no evidence to support Trump’s charge, and Comey affirmed their claims.

“We know there was not a physical wiretap of Trump Tower,” Chairman Devin Nunes, R-Calif., said in his opening statement, while saying it’s “possible” other surveillance activities were conducted against Trump and his associates.

California Rep. Adam Schiff, the ranking Democratic member on the committee, said definitively Monday that no evidence was found to support the “slanderous accusation.”

More broadly, the hearing was meant to address the allegations of Russian meddling in the 2016 campaign and claims of collusion or coordination between the Trump campaign and Russian officials. Before Monday, Comey had not said whether there is an investigation of possible Trump-Russia connections.

Ahead of the hearing, Trump blasted that narrative as “FAKE NEWS.” He cited Obama intelligence director James Clapper’s recent statement that there was “no evidence” of Trump-Russia collusion.

Still, Schiff maintains “circumstantial” evidence existed. He laid out a series of concerns during his opening statement Monday, detailing a lengthy timeline of contacts and arrangements Trump associates had with Russian officials and entities. This included former National Security Adviser Michael Flynn’s initially concealed contact with the Russian ambassador and accurate suggestions from a Trump associate that WikiLeaks last year would go after Hillary Clinton’s campaign.

In response to Trump’s tweets, Schiff also tweeted Monday that: “The intelligence community concluded the Russians will interfere again. This is why full investigation is important to country. Please stop.”

Trump continued to sound off, questioning past contact between “the Clinton campaign and the Russians,” which a Clinton spokesman has denied.

Nunes stressed the importance of finding those leaking classified information so they “can be brought to justice.”

The House Intelligence Committee is one of several committees looking into Russian influence in the election.