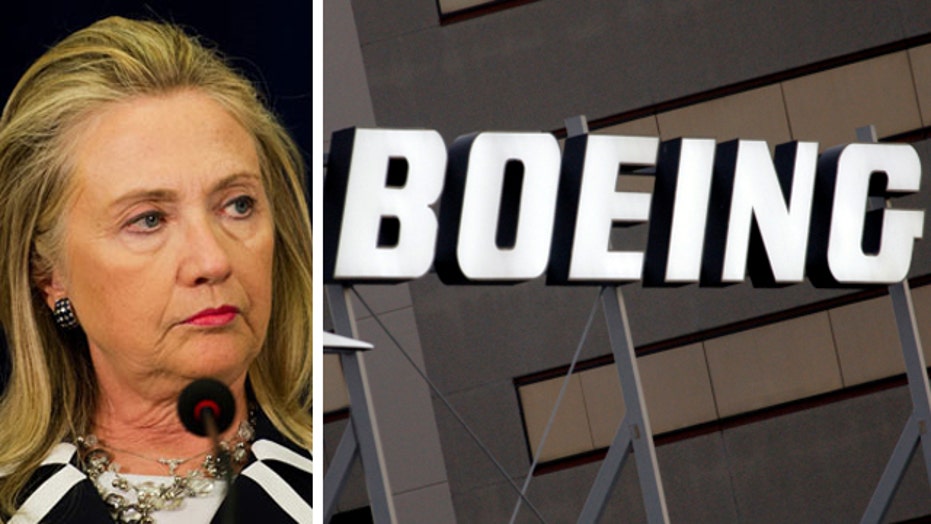 When Hillary Clinton was America's top diplomat, she also appeared at times like a top salesperson for America's biggest airplane maker, Boeing.

Traveling abroad on official business as secretary of state, Clinton often visited Boeing facilities and made a pitch for the host country to buy Boeing jets. During one visit to Shanghai in May 2010, she boasted that "more than half the commercial jetliners operating in China are made by Boeing."

A sales plug in Russia in 2009, though, may have proved especially fruitful. While touring a Boeing plant, Secretary of State Clinton said, "We're delighted that a new Russian airline, Rossiya, is actively considering acquisition of Boeing aircraft, and this is a shameless pitch."

This chain of events is raising new questions for Clinton, and Boeing, as the former secretary of state launches her 2016 presidential campaign. The Boeing deal only adds to a growing list of business deals involving Clinton Foundation donors now coming under scrutiny.

"That opens the door to charges of honest services fraud, that there was a quid pro quo between the Clinton Foundation, the State Department and Boeing," Almasi said.

In prepared answers to questions posed to Boeing by Fox News, a spokesman defended the company's actions.

"Our contribution to the Clinton Foundation to help the people of Haiti rebuild was a transparent act of compassion and an investment aimed at aiding the long-term interests and hopes of the Haitian people," the spokesman said. The company also pointed out that it gave the American Red Cross $1.3 million after the devastating 2010 earthquake.

Clinton defenders say there is no smoking gun. "There's zero evidence that Hillary Clinton went to bat for Boeing for any reason other than to benefit the U.S. economy and U.S. workers," said former Clinton/Gore adviser Richard Goldstein.

But the financial connections don't end there. Boeing also paid former President Bill Clinton $250,000 for a speech in 2012. It was a speech that was approved by the State Department's Ethics Office -- which according to an Associated Press report often approved the ex-president's speaking engagements within days.

And in another potential trouble spot, Boeing's chief lobbyist and former Bill Clinton aide Tim Keating hosted a fundraiser for Ready for Hillary, the political action committee raising money to help fund a run for the White House. Boeing took no issue with Keating doing so.

"Employees are free on their personal time and with personal resources -- as was the case here -- to support candidates and causes of their choice," Boeing wrote in its statement.

The Clinton campaign told Fox News in a statement, "She did the job that every Secretary of State is supposed to do and what the American people expect of them -- especially during difficult economic turmoil."