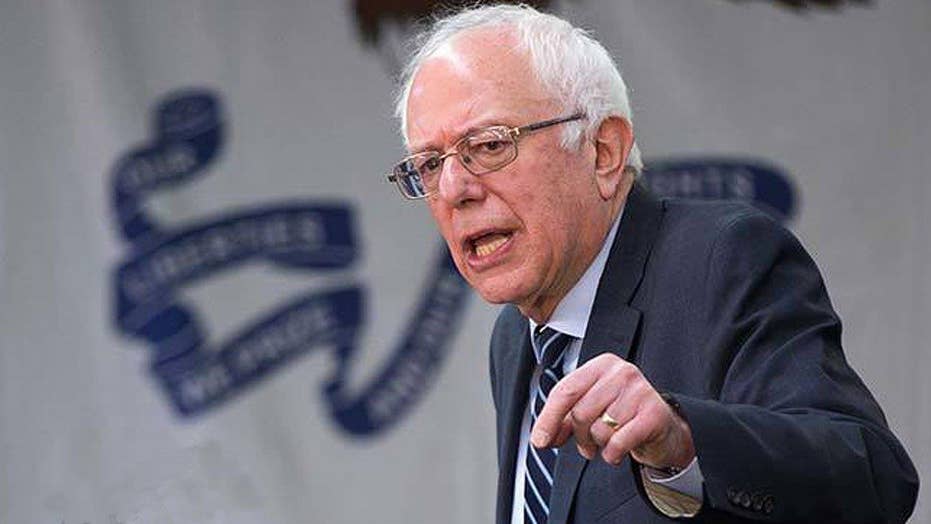 Sanders keeps Obama off campaign trail and on sidelines

How the senator's presence is keeping the president on the bench; Shannon Bream reports on 'Special Report'

Hillary Clinton’s campaign is using a rocky Bernie Sanders interview with the New York Daily News editorial board as a fundraising tool – by pasting the entire interview in an email to supporters.

In the interview, published Monday, the democratic socialist was pushed on how to carry out his main campaign pledge of breaking up the big banks. The Vermont senator struggled to answer in detail, saying only that they could be broken up by "having legislation passed, or giving the authority to the secretary of treasury to determine, under Dodd-Frank, that these banks are a danger to the economy over the problem of too-big-to-fail."

A president doesn't have legal authority to unilaterally break up banks. A group of regulators would have to carry out those plans, and a president is empowered to appoint the regulators. But they have staggered terms, designed to reinforce their independence from the White House.

On foreign policy, Sanders said he didn't know if President Obama's drone policy was the right one. And he "hadn't thought a whole lot" about where he would imprison a captured Islamic State commander.

The Clinton fundraising email praises Sanders for being a “powerful advocate” for leveling the playing field.

“But we've said for a long time that this primary is about who's really going to be able to get things done. And from reading this interview, you get the impression Senator Sanders hasn't thought very much about that,” the email says.

“In fact, even on his signature issue of breaking up the banks, he's unable to answer basic questions about how he'd go about doing it, and even seems uncertain whether a president does or doesn't already have that authority under existing law,” the email reads.

The Sanders campaign sought to clarify the senator’s position Tuesday, detailing how he would break up the banks.

“Within the first 100 days of his administration, Sen. Sanders will require the secretary of the Treasury Department to establish a “Too-Big-to Fail” list of commercial banks, shadow banks and insurance companies whose failure would pose a catastrophic risk to the United States economy without a taxpayer bailout,” spokesman Michael Briggs said in the statement. Briggs went on to lay out how Sanders would “enact a 21st Century Glass-Steagall Act to clearly separate commercial banking, investment banking and insurance services.”

The email from Clinton was sent just a few hours before Sanders was projected to win the Democratic primary in Wisconsin.