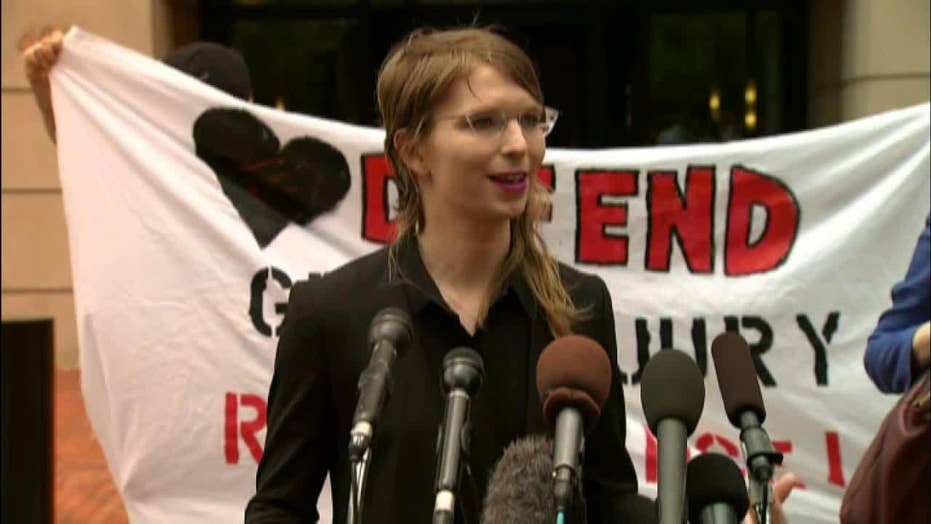 Raw video: Former Army intelligence analyst Chelsea Manning says her stance about testifying before a grand jury about her contacts with WikiLeaks has not changed.

Former Army intelligence analyst Chelsea Manning is headed back to jail for refusing to testify before a grand jury in the WikiLeaks probe.

Manning served two months at William G. Truesdale Adult Detention Center in Alexandria, Va. for a contempt charge regarding the same issue, but was released on Friday after the grand jury term expired.

This time, a judge ordered Manning to the Alexandria Detention Center, where she can face up to 18 months in prison, the length of the grand jury term, unless she agrees to cooperate with the investigation sooner.

Manning said she’d rather stay in jail "forever" than testify to the grand jury probing Wikileaks, describing the subpoena as “an attempt to place me back in confinement.”

“There’s nothing new,” Manning said Thursday during a press conference before her court hearing in Alexandria. “They’re not asking anything new, there’s no new information.”

She told the judge she’d "rather starve to death" than comply with the subpoena.

“Facing jail again, potentially today doesn’t change my stance,” Manning said before entering her hearing. “The prosecutors are deliberately placing me in an impossible situation.”

Manning was found guilty of espionage and theft in 2013 and was sentenced to 35 years in prison after she leaked classified documents to Wikileaks’ Julian Assange. Her sentence was commuted by President Barack Obama in 2017 and she was released from prison after seven years of imprisonment.