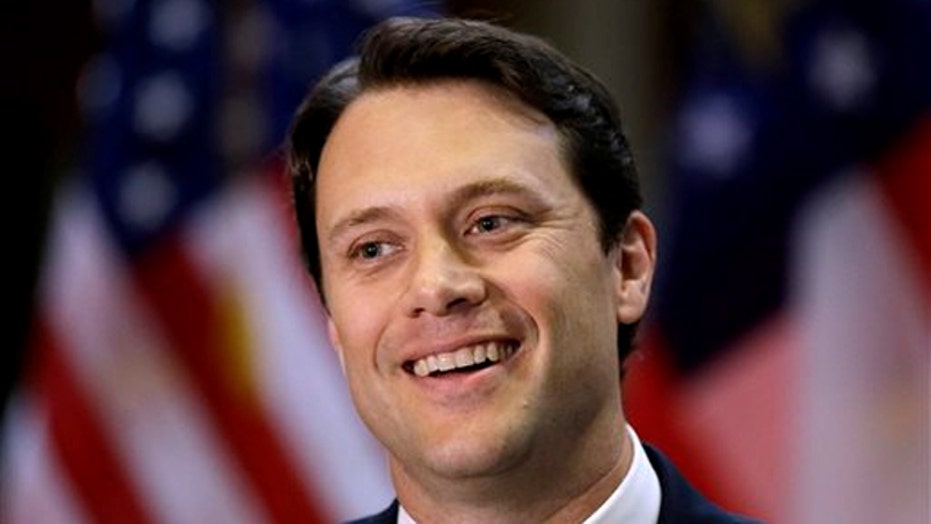 More than four decades after Jimmy Carter served as governor, his grandson is making a play to restore the family at the helm of the Georgia state capital -- in no small part by distancing himself from his controversial granddad.

Jason Carter, a 39-year-old Georgia state senator and Democrat, is running against incumbent Republican Gov. Nathan Deal in the fall. Despite the low regard that conservative-state voters generally have for the former president, the younger Carter is holding his own in the race.

Polling shows the two rivals have traded the lead over the summer, and the latest RealClearPolitics average shows Deal up just 2 percentage points.

Ethics questions surrounding Deal could be giving Carter a boost, but perhaps the biggest factor -- both helping him, and hurting him -- is the family name.

On one hand, analysts say Carter's gains in fundraising and the polls are thanks to the surname. "If his name was Jason Smith, nobody would be talking about him," Georgia Republican strategist Todd Rehm said. "He would not have had a cakewalk through the gubernatorial primary of his party without opposition. He would not be raising significant amounts of money."

Rebecca DeHart, director of the Georgia Democratic Party, said "it's exciting to have this legacy ticket" and to have "Jason, himself, as our candidate."

But with the family name comes the inevitable pitfalls of that legacy. Carter's grandfather left office with approval ratings in the 30's, and while his popularity has seen a boost since then he continues to antagonize the right with his positions on Israel and other touchy subjects.

"Republicans in the state are not fans of former President Jimmy Carter. Having the grandfather -- the name recognition ... I think it's very useful for Jason to be able to separate himself and not simply be Jimmy Carter's grandson," said University of Georgia Political Science Professor Charles Bullock.

It appears the Democratic nominee is trying to do just that. He and his grandfather publicly disagree on the death penalty, for instance. Jason Carter supports it. Jimmy Carter told The Guardian in 2013: "My preference would be for the court to rule that it is cruel and unusual punishment, which would make it prohibitive under the U.S. Constitution."

And while Middle East policies do not typically get a lot of exposure during gubernatorial races, they have made their way into this race. Jason Carter recently told The Atlanta Journal-Constitution, "I believe that Israel has a right to defend itself, especially against Hamas' terrorist actions."

Jimmy Carter, by contrast, co-authored an op-ed story published last month on Foreignpolicy.com titled, "How to Fix It - Ending this war in Gaza begins with recognizing Hamas as a legitimate political actor." In reference to "a reconciliation agreement amount the Palestinian factions," Carter wrote, "Tragically, Israel rejected this opportunity for peace and has succeeded in preventing the new government's deployment in Gaza."

Rehm, who thinks Carter has an "uphill" battle, said the controversy over Carter's Middle East positions are "causing Jason some heartburn among some Jewish voters who have traditionally been considered a heavily Democratic demographic."

But Democratic strategist Basil Smikle Jr. said "Carter the younger has done a lot of work to try to distance himself from his grandfather."

The candidate has also put some space between them on gun rights.

Jason Carter voted for a controversial gun law -- signed by Deal earlier this year -- that allows Georgians to carry firearms into more places including churches, schools, bars and government buildings.

"I think the Second Amendment is important to many people in Georgia. And I know a lot of national Democrats and others have been upset or angry about this," he told MSNBC. "But again, we worked across the aisle to try to make the bill better than it was when it first started."

There are questions surrounding Deal's campaign spending. The Georgia Government Transparency and Campaign Finance Commission launched an ethics investigation into Deal's campaign finances during the 2010 gubernatorial race -- trying to find out if Deal had used campaign money improperly. One of the items in question was the campaign's $135,000 rental of an airplane from a company Deal partly owned.

"What would turn this race upside down would be if the lingering efforts in the investigation of the governor were to bear fruit -- if there were to be an indictment," Bullock said.

Another controversy surrounding the gubernatorial race is a new investigation launched by Georgia's Republican Secretary of State Brian Kemp.

"It looks like it might be able to put a crimp in the voter effort due to the type of information and the volume of information that [the secretary] is requesting in the subpoenas," Rehm said. "This is part of a new model of campaigns. Five years ago if someone said to me 'I'm going to win an election by getting people who don't normally vote to come out,' I would have told them they were crazy."

Others believe this is an effort to suppress the vote.

Bullock suggested that even if Carter loses in November, he could run again.

"There's an old adage in southern politics, 'You run first to get known, and second to win.' Even if Jason does not win in 2014, he might run in 2018. And if Governor Deal gets reelected, there will be an open seat -- arguably giving a Democrat an even better shot at it," Bullock said.