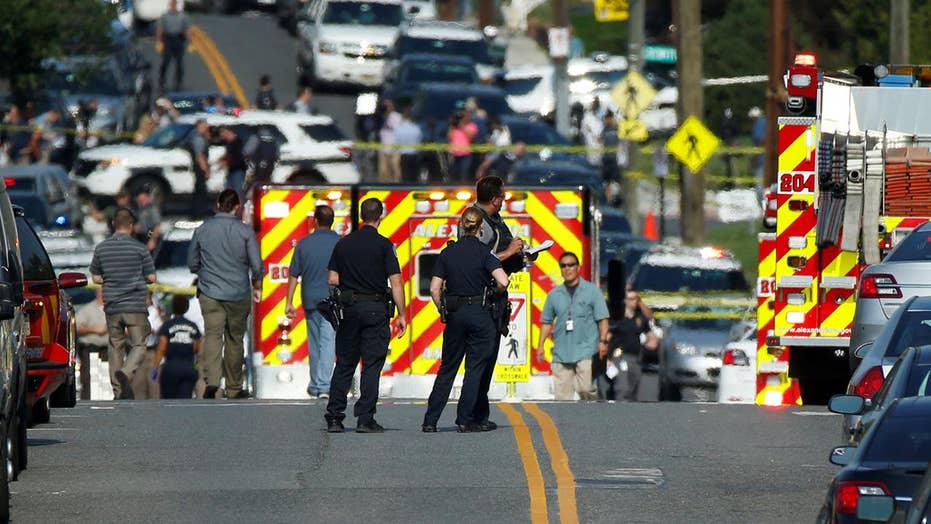 Sen. Paul: Would have been a massacre without Capitol police

Lawmakers are crediting Capitol Police with acting quickly to prevent the shooting at a congressional baseball practice Wednesday from becoming "a massacre."

House Majority Whip Steve Scalise was shot in the hip by a gunman who opened fire at the practice in Alexandria, Va., on Wednesday morning. Two Capitol Police officers and an aide also were injured, a security source said.

Scalise's office said the lawmaker is undergoing surgery and in stable condition, adding: "He is grateful for the brave actions of U.S. Capitol Police, first responders, and colleagues."

Scalise is the first member of Congress to be shot since Gabby Giffords in 2011. As a member of leadership, he has a security detail -- and Sen. Rand Paul, R-Ky., credited police with preventing an even bigger tragedy.

Paul described the scene as "sort of a killing field," and said there were more than 50 shots of gunfire which lasted for at least 10 minutes. Paul described the sounds of the gunfire as possibly coming from an “AR-15” style rifle. The actual model gun used by the shooter has yet to be confirmed.

“We were like sitting ducks,” Paul said, describing his location during the shooting as inside the batting cages, which was approximately 50 yards from second base where Scalise was.

“We were so lucky Capitol Hill Police were there,” Paul said. “They saved our lives.”

Rep. Rodney Davis, R-Ill., who was at bat when the shooting started, also said the scene “would have been a lot worse without Steve Scalise’s detail.” He said they “immediately” began returning fire.

“They were the true heroes, they fired back,” he told “America’s Newsroom.”

Rep. Brad Wenstrup, R-Ohio, helped Scalise once he was shot.

“I felt like I was back in Iraq but without my weapons,” Wenstrup, a veteran and former surgeon, said on “Fox & Friends.” “Scalise was as brave as he possibly could be. He said he was thirsty. We made sure we got as much fluid—Gatorade and water—the quicker to an IV the better.”

Wenstrup added: "If Scalise was not there, he's the one with the security detail, we wouldn't have had any protection, and God knows how bad that might have been."

The Congressional Baseball Game is scheduled for June 15 at Nationals Park. The game, which has been a tradition since 1909, pits Senate and House members of each party who sport the uniform of their home state. The practice location is about 10 miles from Washington, D.C.

Rep. Eric Swalwell, D-Calif., who plays on the Democratic team, told Fox News that they practice at a different facility than where the shooting occurred this morning. Swalwell noted that they usually have security, but the Republicans likely had “even more” due to Scalise’s rank in the House Republican Leadership.

“I pray for the recovery of my GOP colleagues and their staff. This charity game has always been a refuge from the tense battles inside the Capitol,” Swalwell told Fox News. “To see players under attack is sickening.”

President Trump condemned the shooting Wednesday morning saying, "Many lives would have been lost if not for the heroic actions of the two Capitol Police officers who took down the gunman despite sustaining gunshot wounds."