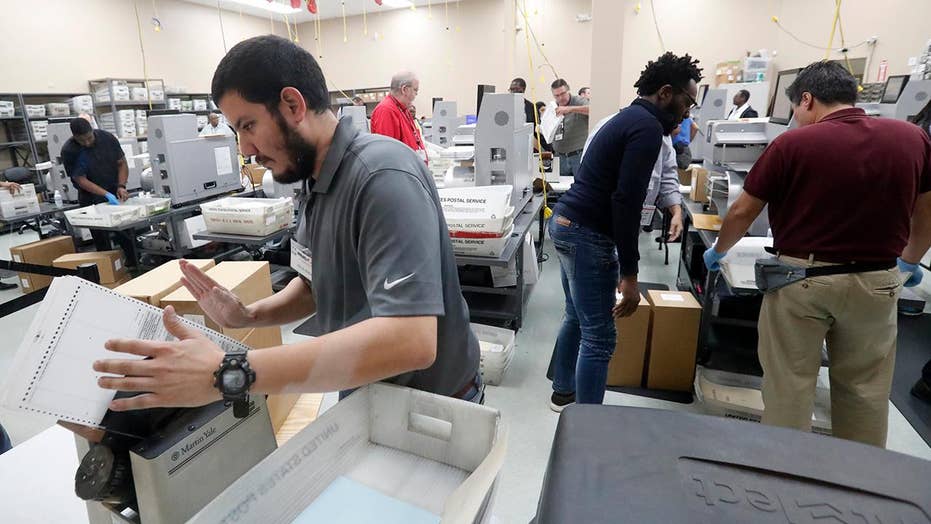 Top official blames his unfamiliarity with the website to submit results while the Scott campaign calls the move intentional; Peter Doocy reports from Lauderhill, Florida on what's next.

Fort Lauderdale, Fla. – The top election official in Florida's heavily Democratic Broward County said late Thursday that the county had uploaded the results of its recount two minutes after the state’s 3 p.m. deadline – making its machine recount tally void. Instead, the county's results from last Tuesday’s election will stand until manual recount totals in the state's closely contested Senate race come in Sunday at noon.

The news of the bungled ballot count comes after Snipes boasted about never missing a deadline.

Later, Snipes acknowledged that "the results were in progress when I came out and made" that statement.

"An election like the one we just finished almost has so many moving parts and so many components," Snipes said. "I'm pleased that we were able to accomplish what we did accomplish in the period of time that was available."

How did Broward County miss the deadline to turn in their machine recount total by 2 minutes? Reaction from Republican Rep. Matt Gaetz.

“Basically, I just worked my ass off for nothing,” said Joseph D’Alessandro, Broward County’s election planning and development director.

D’Alessandro said he had a hard time uploading the results in time because he wasn’t familiar with the website used to send them to the secretary of state.

"Basically, I just worked my ass off for nothing."

Meanwhile, in the Florida governor's race, Republican candidate Ron DeSantis holds a sizable 33,683-vote lead over Democrat Andrew Gillum following the machine recount, a 0.41-percentage point margin high enough under state law to avoid a mandatory manual recount that triggers when a race is within 0.25 percentage points. Gillum, who gained only 1 vote on DeSantis in the recount, still has not conceded in the race.

In the Senate race, Scott holds a 12,603-vote lead over Nelson after the machine recount, a slim 0.15-percentage point advantage that automatically triggers a manual recount.

As of the 3 p.m. deadline for a machine recount of three close statewide contests, nearly all of Florida’s 67 counties —except Palm Beach and Hillsborough counties — had reported updated results. Hillsborough County intentionally refused to report its recount figures, which would have awarded Scott approximately 150 votes, because the recount turned up 846 fewer votes in total than the county's initial tally.

"Even though we achieved 99.84 percent success in our recount effort, we are not willing to accept that votes go unreported," Hillsborough County Supervisor of Elections Craig Latimer told reporters. "For that reason, the Canvassing Board has decided that the first unofficial results will stand as our second unofficial."

Broward County has been under the microscope since the recount was ordered Saturday, and Thursday’s apparent mistake was just the latest in a series of missteps for the largely Democratic county. Last week, a judge sided with Scott's campaign in a lawsuit in which he alleged Snipes had violated state public records law and the Florida Constitution by withholding critical ballot information.

Earlier this year, a judge found that Snipes had illegally destroyed ballots in a 2016 congressional contest, leading the secretary of state's office to assign election monitors to supervise her office.

Crowd of protestors gather outside the Broward County of Supervisor of Elections Office as the statewide election recount is underway while ballots for governor, Senate, Agricultural Commission were run through scanning machines in Broward for a second time under the watchful eye of representatives of both parties and the campaigns on Sunday, Nov. 11, 2018. (Carl Juste/Miami Herald via AP)

“It would have been both surprising and shocking if they had actually started [the recount] on time and completed it on time,” Cathy Lerman, principal of the Lerman Law Firm in Florida, told Fox News.

Protesters have been camped outside Broward’s Lauderhill recount site for six days.

Some carried signs that read, “Corrupt Snipes!!! Lock Her Up!” “Busted Brenda” and “I trust [Michael] Avenatti more than Brenda!” while shouting at election officials, counter-protesters and the news media.

“When they call this woman incompetent, they’re wrong,” President Trump told The Daily Caller on Wednesday, referring to Snipes. “She’s very competent but in a bad way.”

Since the recall was officially ordered on Saturday, Broward elections staff have had to sort through more than 3.5 million pages of ballots before they actually started to count votes. Several counties, like Miami-Dade, planned ahead and finished much faster than Broward.

An employee at the Palm Beach County Supervisor of Elections office pushes a pallet of ballot boxes during a recount on Wednesday, Nov. 14, 2018, in West Palm Beach, Fla. (AP Photo/Brynn Anderson)

Now that the machine recount deadline has passed, counties will have until noon on Sunday Nov. 18 to submit results from a manual recount in the Senate race between Nelson and Scott.

Palm Beach Supervisor of Elections Susan Bucher testified by phone on Thursday that she expects her county, whose recount machines experienced systemic hardware and software issues this week, to complete counting votes in the Senate race in the “wee hours of today or tomorrow," and to submit updated numbers in time for the Nov. 18 deadline.

These updated numbers would count as long as they are submitted on time, even if Palm Beach County officials are not finished recounting in other races. There would only be a default to the original election numbers if no new numbers across the board are submitted by Nov. 18.

Additional rulings on several court cases initiated by both parties could come overnight or early tomorrow.

"We have been the laughingstock of the world, election after election,” Judge Mark E. Walker, the Obama-appointed chief judge of the U.S. District Court for the Northern District of Florida, said Thursday. “Yet we still chose not to fix it.”

Judge Walker, who said he would be working deep into the night reviewing several cases pending before him, denied one motion in open court just late Thursday evening: a request to release a list of names of voters whose ballots have been set aside because their signatures did not match the ones on file with state officials.

For example, some voters' mail-in ballots were flagged and set aside because the signatures on their ballots were substantially different from the signatures the voters separately provided the Department of Motor Vehicles to obtain a license or other official document.

Judge Walker has extended the deadline for voters whose ballots had been rejected for signature issues to resolve the problem with election officials until 5 p.m. on Saturday, so that their votes can be counted. But on Thursday he said he would not allow the court to be "used" by either party to "target" individual voters, which he predicted would happen if he took the additional step of releasing the voters' identities.