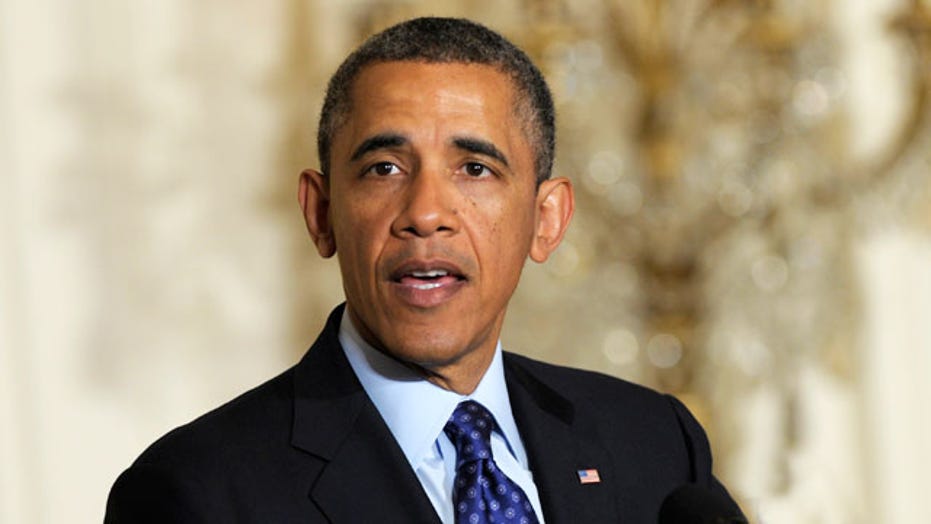 The president plans to unveil his budget Wednesday. According to a senior administration official, the plan includes a provision to lower cost-of-living adjustments to Social Security, the benefit program for retirees.  This would curb the growth in benefits.

The administration made clear that it is offering changes to Social Security and Medicare -- the two benefit programs most important to seniors -- in order to convince Republicans to accept increased revenues. The official said the plan to be unveiled next week "isn't a menu of options for them to choose from -- it's a cohesive package."

But Boehner bristled at the demand, noting that the president and his party already extracted tax increases on top earners as part of the deal to avert the fiscal crisis at the end of 2012.

"In the end, the president got his tax hikes on the wealthy with no corresponding spending cuts. At some point we need to solve our spending problem, and what the president has offered would leave us with a budget that never balances. In reality, he's moved in the wrong direction, routinely taking off the table entitlement reforms he's previously told me he could support," Boehner said.

Democrats have argued the recently enacted sequester cuts too deep, and continue to press for tax increases to help close the deficit. Many Democrats oppose any drastic changes to entitlements. The inclusion of the Social Security provision by Obama was meant as a gesture to Republicans - and one that has already drawn the ire of liberal members of Congress.

"When the president visited the Capitol last month, House Republicans stated a desire to find common ground and urged him not to make savings we agree upon conditional on another round of tax increases. If reports are accurate, the president has not heeded that call," Boehner said. "If the president believes these modest entitlement savings are needed to help shore up these programs, there's no reason they should be held hostage for more tax hikes. That's no way to lead and move the country forward."

Obama's plan calls for additional tax revenue, including a proposal to place limits on tax-preferred retirement accounts for top earners. Obama has also called for limits on tax deductions by top earners, a proposal that could generate about $580 billion in revenue over 10 years.

It aims to reduce the deficit by $1.8 trillion over 10 years. The administration claimed to be offering the Social Security change reluctantly.

"While this is not the president's ideal deficit reduction plan, and there are particular proposals in this plan like the (Social Security change) that were key Republican requests," the senior administration official said. "The president felt it was important to make it clear that the offer still stands."

The president could face an even tougher time selling the Social Security change to liberal members of Congress.

Sen. Bernie Sanders, I-Vt., fired off a statement Thursday responding to what was then the rumor that Obama's budget could include the change.

"Millions of working people, seniors, disabled veterans, those who have lost a loved one in combat, and women will be extremely disappointed if President Obama caves into the long standing Republican effort to cut Social Security and benefits for disabled veterans and their survivors through a so-called chained CPI," Sanders said. "In 2008, candidate Barack Obama told the American people that he would not cut Social Security.  Having him go back on his word will only add to the rampant political cynicism that our country is experiencing today."

Chained CPI is the Washington term for the revised inflation adjustment that would effectively curb annual increases in a broad swath of government programs, but would have its biggest impact on Social Security.

The inflation adjustment would reduce federal spending over 10 years by about $130 billion, according to past White House estimates. Because it also affects how tax brackets are adjusted, it would also generate about $100 in higher taxes and affect even middle income taxpayers.

Obama's budget, to be released next week, comes after the Republican-controlled House and the Democratic-run Senate passed separate and markedly different budget proposals. House Republicans achieved long-term deficit reductions by targeting safety net programs; Democrats instead protected those programs and called for $1 trillion in tax increases.

Obama's budget proposal includes features from an offer he made to House Speaker John Boehner during fiscal negotiations last year. Those talks ultimately failed but Congress did agree to increase tax rates on top earners.

The reductions in growth of benefit programs, which would affect veterans, the poor and the older Americans, is sure to anger many Democrats.
Labor groups and liberals have long been critical of Obama's offer to Boehner for including such a plan.

Obama's new plan would also replace the sequester with other spending cuts. But it will steer clear of major cuts to Medicaid, including tens of billions in reductions to the health care plan for the poor that the administration had proposed only last year.